Situated north-west of the town of Migori, in the Lake Victoria region, this dry-stone walled settlement was probably built in the 16th century CE. The Ohinga (i.e. settlement) seems to have served as a fort for communities and livestock, but also defined social entities and relationships linked to lineage. Thimlich Ohinga is the largest and best preserved of these traditional enclosures. It is an exceptional example of the tradition of massive dry-stone walled enclosures, typical of the first pastoral communities in the Lake Victoria Basin, which persisted from the 16th to the mid-20th century. 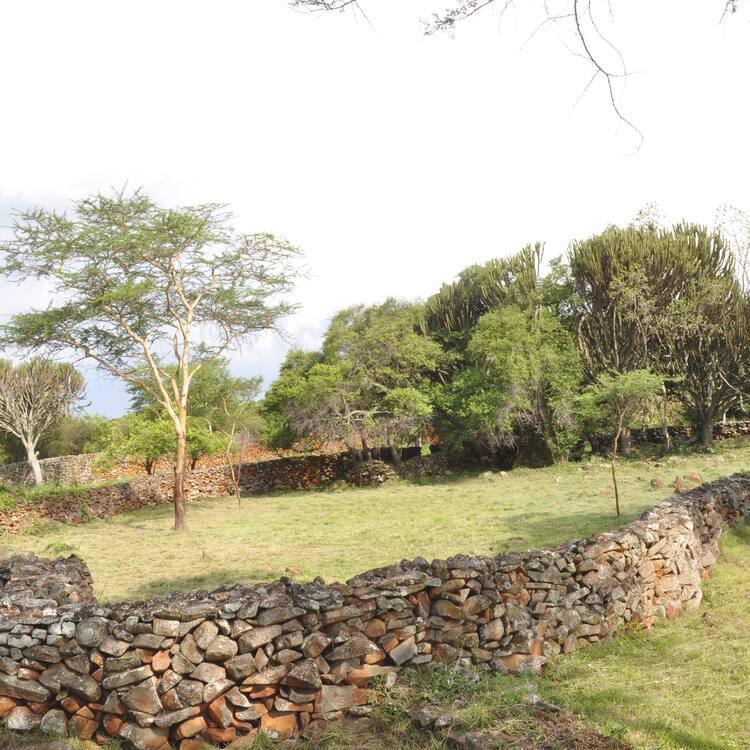 Located 46 km northwest of Migori Town in the Lake Victoria region, Thimlich Ohinga archaeological site is a dry-stone walled settlement, based on a complex organization system of communal occupation, craft industries and livestock that reflects a cultural tradition developed by pastoral communities in the Nyanza region of the Lake Victoria basin that persisted from 16th to mid-20th centuries.

Thimlich Ohinga is the largest and best preserved of these massive dry-stone walled enclosures. The Ohinga appear to have served primarily as security for communities and livestock, but they also defined social units and relationships linked to lineage based systems.

The property comprises four larger Ohingni, all of which have extensions. The main Ohinga is referred to as Kochieng, while the others are Kakuku, Koketch and Koluoch. The dry stone wall enclosures are constructed in a three-phase design with separately built up outer and inner phases, held together by the middle phase. Stones were placed in an interlocking system that enhanced overall stability without use of any mortar or cement. The walls are built of neatly arranged stones of various sizes and without mortar, ranging from 1.5 m to 4.5 m in height, with an average thickness of 1 m.

Thimlich Ohinga is an exceptional testimony of settlement patterns and spatial community relations in the Lake Victoria Basin, which documents the successive occupation by different people from various linguistic origins during an important episode in the migration and settlement of the Lake Victoria Basin between the 16th and 17th centuries. It also gives reference to habitation patterns, livestock cultivation and craft practices prevalent in communal settlements at this time.

Criterion (iii): Thimlich Ohinga provides an exceptional testimony to settlement traditions in the Lake Victoria Basin. It illustrates shared communal settlement, livestock cultivation and craft industry patterns, utilized and practiced by several successive inhabitant groups of different linguistic origin. The archaeological evidence testified not only to the communities’ spatial organization but also to an elaborate system of interrelations between the different Ohingni within proximity to each other. It therefore allows to understand and further research community interaction patterns between the 16th and the mid-20th century in the region.

Criterion (iv): The settlements of Thimlich Ohinga provide an impressive reference to spatial planning and settlement types in the wider Lake Victoria Basin, at a period in history characterized by increased human mobility as a result of social, economic and environmental pressures that affected human populations in the region. The massive stone walled enclosures at Thimlich Ohinga mark an important episode in the migration and settlement of the Lake Victoria Basin and sub-Saharan Africa as a whole. Thimlich Ohinga also illustrates an outstanding example of undressed dry-stone construction typology characterized by a three-phase building technology using stones of irregular shapes in two phases joined together by a third middle phase.

Criterion (v): Thimlich Ohinga, as the best preserved example of Ohingni constitutes a representative and outstanding example of Ohingni, a distinctive form of pastoral settlement that persisted in the Lake Victoria Basin from the 16th to the mid-20th centuries.

The property includes the Ohingni with their stone walls and low entrances, the structural support features known as buttresses, low water/sludge drainage vents from the inner livestock enclosures (kraals), the three-phase wall design, the inner and outer enclosures, industrial site and house pits.

To ensure the full protection of the archaeological remains, the entire property area, including the suggested extension toward a yet private land in the south, will need to be considered in an integrated management approach. This also applies to the property’s immediate setting, where visual integrity depends on the conservation of the surrounding vegetation to retain the traditional atmosphere of the jungle-protected settlement.

Maintenance work of the structures was carried out over the centuries using traditional materials and techniques. Several subsequent periods of occupation and repair did not interfere with the design or workmanship of the structures. After their abandonment, the Ohingni became ruins. In the past decades, these ruins have now been largely restored, and selected walls have been added to demarcate the boundary between the archaeological site and the forest. This new work is not always easily distinguishable from the historic stone structures. Future conservation measures should be undertaken based on minimum intervention approaches and should continue to train younger apprentices in traditional maintenance techniques.

The property is protected by the National Museums and Heritage Act, Cap 216 of 2006 and is managed by the National Museums of Kenya. The legal protection is further strengthened by traditional rules and taboos maintained by community elders, which assist in the protection of the property and its surrounding flora and fauna. The archaeological potential of features located on the south side of the property requires the extension of the property boundary towards this direction, in line with the recommendation by the World Heritage Committee in its Decision 39 COM 8B.8. Likewise, the buffer zone, though adequately extended in southern direction needs to be further adjusted in all other directions.

A new management plan for the property has been adopted in 2017 and guides site management until 2027. The management authorities plan to develop controlled tourism while conserving cultural and environmental values. Plans are underway to develop a picnic site, a camping site and an eco-lodge as additional visitor infrastructure. While at a theoretical levels the aims of this emphasize sustainability, it will need to be observed in practice how the anticipated new infrastructure and significant visitor increase will affect the property. It will be essential that any tourism or infrastructure project in the boundaries or the wider setting of the property will be evaluated by a comprehensive Heritage Impact Assessment before permissions are granted.

The property serves as a meeting venue for the community and remains a location for community rituals, in particular in times of crisis. These as well as the community-based maintenance strategies need to be continued to retain the strong involvement and attachment of the local communities.