Located in northwest England, the English Lake District is a mountainous area, whose valleys have been modelled by glaciers in the Ice Age and subsequently shaped by an agro-pastoral land-use system characterized by fields enclosed by walls. The combined work of nature and human activity has produced a harmonious landscape in which the mountains are mirrored in the lakes. Grand houses, gardens and parks have been purposely created to enhance the landscape’s beauty. This landscape was greatly appreciated from the 18th century onwards by the Picturesque and later Romantic movements, which celebrated it in paintings, drawings and words. It also inspired an awareness of the importance of beautiful landscapes and triggered early efforts to preserve them. 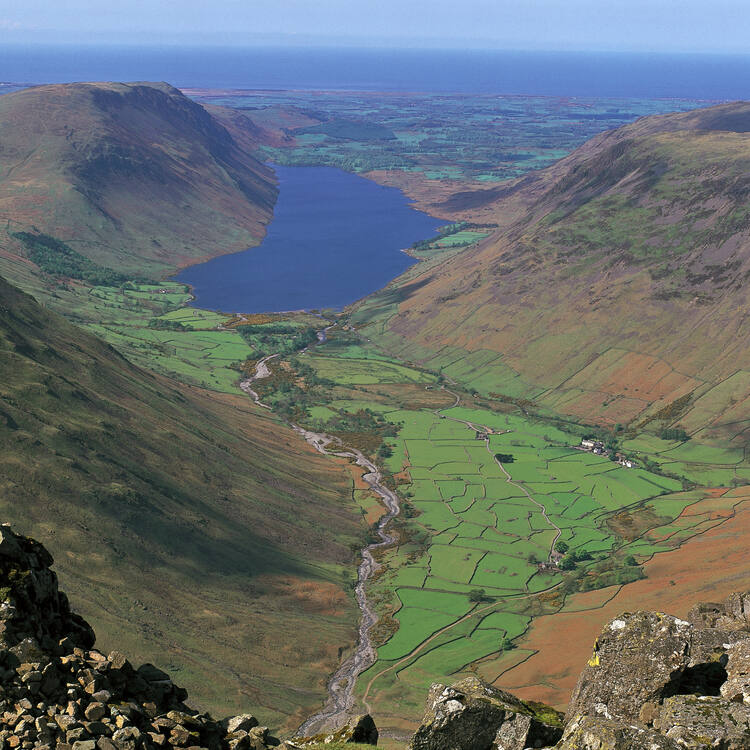 The English Lake District is a self-contained mountainous area in North West England of some 2,292 square kilometres. Its narrow, glaciated valleys radiating from the central massif with their steep hillsides and slender lakes exhibit an extraordinary beauty and harmony. This is the result of the Lake District’s continuing distinctive agro-pastoral traditions based on local breeds of sheep including the Herdwick, on common fell-grazing and relatively independent farmers. These traditions have evolved under the influence of the physical constraints of its mountain setting. The stone-walled fields and rugged farm buildings in their spectacular natural backdrop, form an harmonious beauty that has attracted visitors from the 18th century onwards. Picturesque and Romantic interest stimulated globally-significant social and cultural forces to appreciate and protect scenic landscapes. Distinguished villas, gardens and formal landscapes were added to augment its picturesque beauty. The Romantic engagement with the English Lake District generated new ideas about the relationship between humanity and its environment, including the recognition of harmonious landscape beauty and the validity of emotional response by people to their landscapes. A third key development was the idea that landscape has a value, and that everyone has a right to appreciate and enjoy it. These ideas underpin the global movement of protected areas and the development of recreational experience within them. The development in the English Lake District of the idea of the universal value of scenic landscape, both in itself and in its capacity to nurture and uplift imagination, creativity and spirit, along with threats to the area, led directly to the development of a conservation movement and the establishment of the National Trust movement, which spread to many countries, and contributed to the formation of the modern concept of legally-protected landscapes.

Criterion (ii): The harmonious beauty of the English Lake District is rooted in the vital interaction between an agro-pastoral land use system and the spectacular natural landscape of mountains, valleys and lakes of glacial origins. In the 18th century, the quality of the landscape was recognised and celebrated by the Picturesque Movement, based on ideas related to both Italian and Northern European styles of landscape painting. These ideas were applied to the English Lake District in the form of villas and designed features intended to further augment its beauty. The Picturesque values of landscape appreciation were subsequently transformed by Romantic engagement with the English Lake District into a deeper and more balanced appreciation of the significance of landscape, local society and place. This inspired the development of a number of powerful ideas and values including a new relationship between humans and landscape based on emotional engagement; the value of the landscape for inspiring and restoring the human spirit; and the universal value of scenic and cultural landscapes, which transcends traditional property rights. In the English Lake District these values led directly to practical conservation initiatives to protect its scenic and cultural qualities and to the development of recreational activities to experience the landscape, all of which continue today. These values and initiatives, including the concept of protected areas, have been widely adopted and have had global impact as an important stimulus for landscape conservation and enjoyment. Landscape architects in North America were similarly influenced, directly or indirectly, by British practice, including Frederick Law Olmsted, one of the most influential American landscape architects of the 19th century.

Criterion (v): Land use in the English Lake District derives from a long history of agro-pastoralism. This landscape is an unrivalled example of a northern European upland agro-pastoral system based on the rearing of cattle and native breeds of sheep, shaped and adapted for over 1,000 years to its spectacular mountain environment. This land use continues today in the face of social, economic and environmental pressures. From the late 18th century and throughout the 19th century, a new land use developed in parts of the Lake District, designed to augment its beauty through the addition of villas and designed landscapes. Conservation land management in the Lake District developed directly from the early conservation initiatives of the 18th and 19th centuries. The primary aims in the Lake District have traditionally been, and continue to be, to maintain the scenic and harmonious beauty of the cultural landscape; to support and maintain traditional agro-pastoral farming; and to provide access and opportunities for people to enjoy the special qualities of the area, and have developed in recent times to include enhancement and resilience of the natural environment. Together these surviving attributes of land use form a distinctive cultural landscape which is outstanding in its harmonious beauty, quality, integrity and on-going utility and its demonstration of human interaction with the environment. The English Lake District and its current land use and management exemplify the practical application of the powerful ideas about the value of landscape which originated here and which directly stimulated a landscape conservation movement of global importance.

Criterion (vi): A number of ideas of universal significance are directly and tangibly associated with the English Lake District. These are the recognition of harmonious landscape beauty through the Picturesque Movement; a new relationship between people and landscape built around an emotional response to it, derived initially from Romantic engagement; the idea that landscape has a value and that everyone has a right to appreciate and enjoy it; and the need to protect and manage landscape, which led to the development of the National Trust movement, which spread across many countries with a similar rights system. All these ideas that have derived from the interaction between people and landscape are manifest in the English Lake District today and many of them have left their physical mark, contributing to the harmonious beauty of a natural landscape modified by: a persisting agro-pastoral system (and supported in many cases by conservation initiatives); villas and Picturesque and later landscape improvements; the extent of, and quality of land management within, the National Trust property; the absence of railways and other modern industrial developments as a result of the success of the conservation movement.

The English Lake District World Heritage property is a single, discrete, mountainous area. All the radiating valleys of the English Lake District are contained within it. The property is of sufficient size to contain all the attributes of Outstanding Universal Value needed to demonstrate the processes that make this a unique and globally-significant property. The boundary of the property is the Lake District National Park boundary as designated in 1951 and is established on the basis of both topographic features and local government boundaries. The attributes of Outstanding Universal Value are in generally good condition. Risks affecting the site include the impact of long-term climate change, economic pressures on the system of traditional agro-pastoral farming, changing schemes for subsidies, and development pressures from tourism. These risks are managed through established systems of land management overseen by members of the Lake District National Park Partnership and through a comprehensive system of development management administered by the National Park Authority.

As an evolving cultural landscape, the English Lake District conveys its Outstanding Universal Value not only through individual attributes but also in the pattern of their distribution amongst the 13 constituent valleys and their combination to produce an over-arching pattern and system of land use. The key attributes relate to a unique natural landscape which has been shaped by a distinctive and persistent system of agro-pastoral agriculture and local industries, with the later overlay of distinguished villas, gardens and formal landscapes influenced by the Picturesque Movement; the resulting harmonious beauty of the landscape; the stimulus of the Lake District for artistic creativity and globally influential ideas about landscape; the early origins and ongoing influence of the tourism industry and outdoor movement; and the physical legacy of the conservation movement that developed to protect the Lake District.

The Management Plan seeks to address the long-term challenges faced by the property including threats faced by climate change, development pressures, changing agricultural practices and diseases, and tourism.