Located within the Wuling mountain range in Guizhou Province (south-west China), Fanjingshan ranges in altitude between 500 metres and 2,570 metres above sea level, favouring highly diverse types of vegetation and relief. It is an island of metamorphic rock in a sea of karst, home to many plant and animal species that originated in the Tertiary period, between 65 million and 2 million years ago. The property’s isolation has led to a high degree of biodiversity with endemic species, such as the Fanjingshan Fir (Abies fanjingshanensis) and the Guizhou Snub-nosed Monkey (Rhinopithecus brelichi), and endangered species, such as the Chinese Giant Salamander (Andrias davidianus), the Forest Musk Deer (Moschus berezovskii) and Reeve’s Pheasant (Syrmaticus reevesii). Fanjingshan has the largest and most contiguous primeval beech forest in the subtropical region. 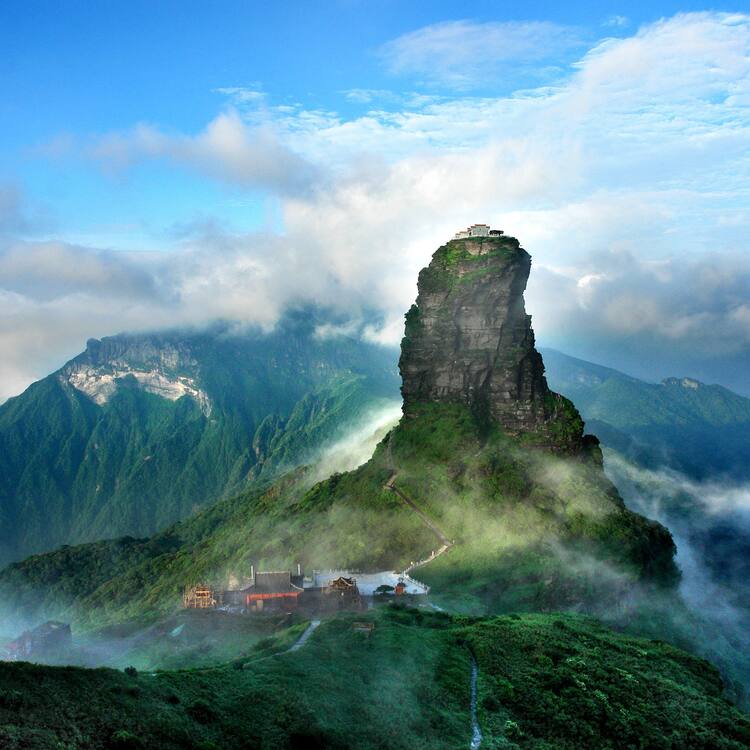 The Fanjingshan World Heritage property is located in South-West China, covering a total area of 40,275 ha, fully enclosed by a buffer zone of 37,239 ha. Fanjingshan is located in a monsoonal climatic context and is an important source of water for the surrounding landscapes and beyond, with some 20 rivers and streams feeding the Wujiang and Yuanjiang River systems, both of which ultimately drain into the Yangtze River.

Fanjingshan is an island of metamorphic rock in a sea of karst and is home to many ancient and relict plant and animal species which originated in the Tertiary period, between 65 million and 2 million years ago. The property’s geologic and climatic characteristics have shaped its flora which behaves as if it were on an island. This has led to a high degree of endemism, with a total of 46 locally endemic plant species, 4 endemic vertebrate species and 245 endemic invertebrate species. The most prominent endemic species are Fanjingshan Fir (Abies fanjingshanensis - EN) and Guizhou Snub-nosed Monkey (Rhinopithecus brelichi - EN), both of which are entirely restricted to the property. Three species of Fagus (F. longipetiolata, F. lucida, and F. engleriana) are the dominant species of what is understood to be the largest primary beech forest in the subtropical region.

A total of 3,724 plant species have been recorded in the property, an impressive 13% of China’s total flora. The property is characterized by an exceptionally high richness in bryophytes as well as one of the distribution centres for gymnosperms in China. The diversity of invertebrates is also very high with 2,317 species. A total of 450 vertebrate species are found inside the property. Fanjingshan being the only habitat in the world for Fanjingshan Fir and Guizhou Snub-nosed Monkey, as well as 64 plant and 38 animal species that are listed as globally threatened, including the tree Bretschneidera sinensis (EN), Chinese Giant Salamander (Andrias davidianus - CR), Forest Musk Deer (Moschus berezovskii - EN), Reeves’s Pheasant (Syrmaticus reevesii - VU), and Asiatic Black Bear (Ursus thibetanus - VU).

Criterion (x): Fanjingshan is characterized by an exceptional richness in bryophytes, with 791 species, of which 74 are endemic to China. The property also has one of the richest concentrations of gymnosperms in the world, with 36 species. A significant number of endemic species are distributed inside the property, including 46 local endemic and 1,010 Chinese endemic plant species, as well as 4 locally endemic vertebrate species. The most notable of these is the endangered Guizhou Snub-nosed Monkey, which is found only in Fanjingshan and nowhere else in the world. Another prominent endemic species is Fanjingshan Fir, which is also restricted to this property.

The property comprises three contiguous areas: Fanjingshan National Nature Reserve,Yinjiang Yangxi Provincial Nature Reserve, and a small area of National Non-Commercial Forest. The property behaves like a biogeographic island and is relatively small, however at the time of inscription, it is of adequate size to ensure the complete representation of the key habitats and viable populations which convey the property's significance. The boundaries of the property and its buffer zone are clearly designated. The property covers all important local floristic elements, and is of sufficient size to encompass the entire known home range of Guizhou Snub-nosed Monkey. Maintaining good ecological connectivity between the different types of protected areas which make up the property will be crucial to the viability of isolated and very restricted range populations of threatened species.

Fanjingshan National Nature Reserve is also a UNESCO Biosphere Reserve. It will be important to rationalise, where feasible, the zones of the Biosphere Reserve to correspond with the boundaries of the property and its buffer zone in order to streamline protection and management.

All land in the property is owned and regulated by the State Party. The property is protected by a comprehensive range of national and provincial legislation applicable to the national and provincial nature reserves, as well as the small area of National Non-Commercial Forest which make up the property. Furthermore, much of the buffer zone and the wider landscape enjoy various levels of legal protection, as they are part of provincial parks. In addition, the villages within the property and its buffer zone each have their own village regulations, which prescribe certain behaviours that respect the natural environment of the mountain.

There are three main management agencies responsible for the property, i.e. the Administration of Fanjingshan National Nature Reserve, the Administration of Yinjiang Yangxi Provincial Nature Reserve, and the Forest Department. In March 2018, the Ministry of Natural Resources was formally established in China. All the protected areas in China are now implemented under a single unified management system by the National Forestry and Grassland Administration under the Ministry. In August 2017, the Institutional Committee of the People’s Government of Guizhou Province approved the establishment of Protection and Management Bureau of Fanjingshan Natural Heritage, to ensure unified management across the property and its buffer zone.

Other relevant plans exist for the management of each of the constituent protected areas (except for the National Non-commercial Forest), for ecotourism development of Guizhou Fanjingshan National Nature Reserve, and for the conservation of Guizhou Snub-nosed Monkey. To a certain extent, these plans also address threats outside the boundaries of the property, where the component protected areas extend beyond these boundaries.

Current staffing levels, although relatively small, are considered adequate at the time of inscription, in part due to the collaboration with local police and the small portion of the property which is open to the public. A system is being implemented to monitor visitors, environmental quality, natural disasters, human activity, and villages. The property is relatively small with highly endangered and vulnerable species populations and it will be important that growing tourism demand is carefully managed to avoid negative impacts on the Outstanding Universal Value.

There are several villages within the property and in the buffer zone and a voluntary relocation and compensation programme is in effect to reduce the permanent population within the property.  It will be critical to ensure that any relocation is fully voluntary and in line with the policies of the World Heritage Convention and relevant international norms, including principles related to free, prior and informed consent, effective consultation, fair compensation, access to social benefits and skills training, and the preservation of cultural rights.