Ban Chiang is considered the most important prehistoric settlement so far discovered in South-East Asia. It marks an important stage in human cultural, social and technological evolution. The site presents the earliest evidence of farming in the region and of the manufacture and use of metals. 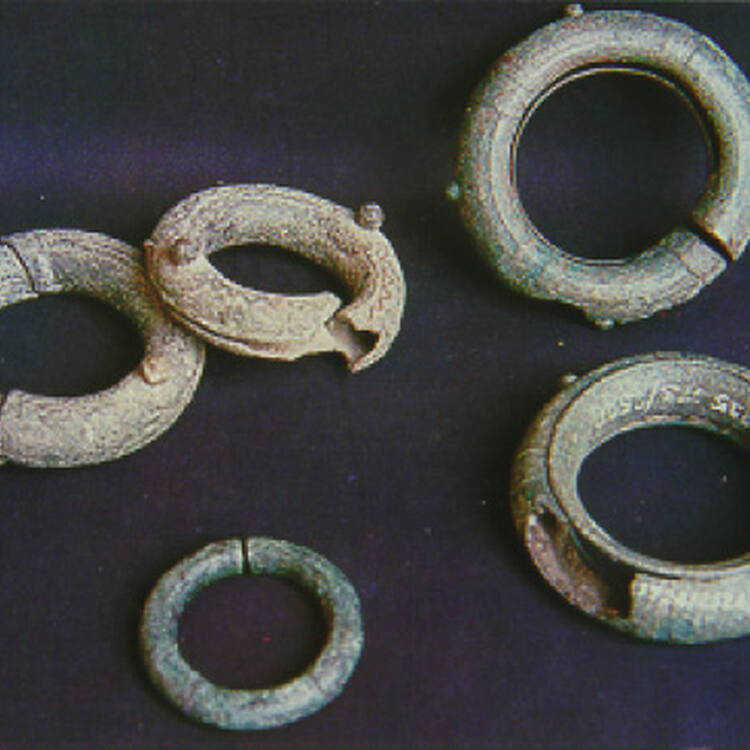 The Ban Chiang Archaeological Site is a large, prehistoric earthen mound located in an agricultural area in the Ban Chiang Sub-district, Nong Han District of Udon Thani Province in northeast Thailand, within the watershed of the Mekong River. It is an oval-shaped mound formed by human habitation 500 meters x 1,350 meters and 8 meters high. The site was first discovered in 1966. It has since been extensively excavated and its remains studied by Thai and international scholars. Since 1966 the dating of the site has been adjusted and refined over time in line with advances in the understanding and techniques of radiometric dating. This research has revealed that the site dates from 1,495 BC .and contains early evidence for settled agrarian occupation in Southeast Asia, along with evidence of wet rice agriculture, associated technological complex of domesticated farm animals, ceramic manufacture, and bronze tool-making technology. The total area of the property is 67.36 ha of which approximately 0.09% has been excavated (as of 2012)

The Ban Chiang Archaeological Site is a prehistoric human habitation and burial site. It is considered by scholars to be the most important prehistoric settlement so far discovered in Southeast Asia, marking the beginning and showing the development of the wet-rice culture typical of the region. The site has been dated by scientific chronometric means (C-14 and thermo luminescence) which have established that the site was continuously occupied from 1495BC until c. 900BC., making it the earliest scientifically-dated prehistoric farming and habitation site in Southeast Asia known at the time of inscription onto the World Heritage List.

The Ban Chiang cultural complex is well-defined and distinctive from anything that preceded it. Through it can trace the spread and development of prehistoric society and its development into the settled agricultural civilizations which came to characterize the region throughout history which still continue up to the present day. Advances in the fields of agriculture, animal domestication, ceramic and metal technology are all evident in the archaeological record of the site. Also evident is an increasing economic prosperity and social complexity of the successive communities at Ban Chiang, made possible by their developing cultural practices, as revealed through the many burials, rich in ceramic and metal grave goods, uncovered at the site.

The Ban Chiang Archaeological Site is also the richest in Southeast Asia in the number and variety of artifacts recovered from the site. As such, the property has been extensively studied by scholars as the archaeological “type-site” for the beginnings of settled agricultural communities and their associated technologies in the region.

Criterion iii: Ban Chiang Archaeological Site was the centre of a remarkable phenomenon of human cultural, social, and technological evolution which occurred independently in this area of Southeast Asia and began at Ban Chiang around 1500 B.C. and spread widely over the whole region.

The Ban Chiang Archaeological Site consists of a large, undisturbed earthen mound which, when excavated, was found to cover a prehistoric habitation site of some of Southeast Asia’s earliest farmers. The site, which had been abandoned and buried underground for at least two millennia, has now been substantially and carefully excavated by Thai and international archaeologists. This has revealed an unbroken stratigraphy of human habitation, use, and burial over two thousand years, covering the period when prehistoric humans in this part of the world first settled in villages, took up agriculture and began the production of metal tools. The earliest stratigraphic layers at Ban Chiang date from as early as 1,500 B.C. This long archaeological sequence is divided by archaeologists into Early, Middle and Late Periods all of which are fully represented in the site’s excavated stratigraphy and which cover the beginnings of rice cultivation to its full-establishment as the principal agricultural activity of the region. The evidence for the beginning of rice agriculture is complemented by evidence of the equally early domestication of cattle, pigs and chickens, presenting a full picture of the emergence of a settled agrarian way of life in the early Neolithic period in Southeast Asia. Each stratigraphic layer at Ban Chiang is exceptionally rich in artifacts, especially ceramics, representing a full typology of both domestic and ritual (burial) types, all of which were made locally in the prehistoric farming communities. In addition to ceramics, the site has exceptional and uniquely early evidence of the knowledge of bronze-making by its inhabitants with remains of raw materials, production facilities, and complete bronze tools and ornaments. These early bronze finds make the site known as the metal tools production site in East and Southeast Asia. Later stratigraphic layers of the site contain evidence for the widespread transition from bronze to iron tool making, characteristic of agricultural settlements in the proto-historic period throughout the region.

It is speculated that climate change in the middle of the 1st millennium AD may have led to the temporary abandonment of the site and the sealing of the prehistoric habitation layers, assuring their archaeological integrity.  The area’s ecology however recovered and the site was again occupied in the late 18th century by farmers migrating across the nearby Mekong River who, once again, took up wet-rice cultivation. To this date the area around Ban Chiang retains its environmental and ecological integrity as a traditional agricultural landscape, representative of the rice cultures of Southeast Asia.

The integrity of the property is therefore high and is to be found in the long archaeological sequence excavated at Ban Chiang, which reveals through its stratigraphy of habitation, workshop areas and burials and the complementary seriation of artefacts, an occupation of two thousand years B.P. covering the entire period of the origin and development of rice agriculture, the domestication of farm animals, and associated tool-making technologies within this region of the world.

The authenticity of the property is related to its archaeological integrity. Carbon-14 and thermoluminescence dating techniques, conducted by a variety of international laboratories, have confirmed the authenticity of the earliest dates of Ban Chiang and the coherence of its stratigraphic record. Exhaustive comparative studies of the assemblage of artifacts recovered from the excavation of the site confirm its relative relationship to other known archaeological sites in the region. The results of this research have been extensively published and subjected to international peer review through numerous professional presentations and conferences. The excavated materials are available for continued professional research. Also continuing is on-site and laboratory research which confirm the authenticity of the interpretation of the site and of its dates. This on-going research has extended the known area of archaeological finds and further enhances the importance of the site as the type-site for the study of the origin and development of Southeast Asian rice cultures.

The Ban Chiang habitation mound remains largely intact, undisturbed, and in situ. The excavated area of the site is well-protected from deterioration, theft or other damage and so the authentic record of the archaeological discovery of the site can be easily read by both professionals and the interested public.  As with all archaeological sites excavated to international scientific standards, substantial areas of the Ban Chiang Archaeological Site have been purposefully left unexcavated, to allow for future research and confirmation of the property’s authenticity.

The continuing agricultural landscape at Ban Chiang is also authentic, in that it has maintained its traditional agricultural character. The present population continues to live on the mound raised above the surrounding rice paddy fields near natural water sources. The population density of the area remains low and the area is still in use for traditional rice farming and livestock rearing, allowing ethnographic analogies to be drawn in the interpretation of the prehistoric site by both professional researchers and visitors to the site.

The Ban Chiang Archaeological Site is a prehistoric archaeological site protected by the Act on Ancient Monuments, Antiques, Objects of Art and National Museums, B.E. 2504 (1961) as amended by Act (No.2), B.E. 2535 (1992), enforced by the Fine Arts Department, Ministry of Culture. There are related laws enforced by related government units which give added protection to the property including the Ratchaphatsadu Land Act, B.E. 2518 (1975), the City Planning Act B.E. 2518 (1975), the Enhancement and Conservation of National Environmental Quality Act, B.E. 2535 (1992), the Building Control Act B.E. 2522 (1979) as amended by Act (No. 2) B.E. 2535 (1992), as well as municipal regulations. A master plan, supported with an annual budgetary allocation from the Ministry of Culture is in force for the protection of the property, continued archaeological research, and its development as a public education resource. The Ban Chiang excavation site is protected from damage with a secured shelter. Nearby there is a site museum which contains public education and visitor facilities. There are adequately trained staff working permanently on site and in the museum to monitor the condition of the site and undertake conservation work as required, to facilitate academic research, and to ensure that the property’s significance is correctly interpreted to the visiting public.

Within the current framework of the reform of national administration which aims to decentralize government functions and responsibilities, it is expected that local, regional, and national committees for the protection of World Heritage will be established. These committees will enhance collaboration with universities and non-governmental professional organizations which work to conserve heritage sites. At Ban Chiang, the on-site museum will continue to be enhanced and upgraded into a learning centre for both public education and archaeological research. The Fine Arts Department aims to disseminate knowledge of the outstanding universal value of the property and its significance to the understanding of the prehistory of Southeast Asia through the organization of research seminars and other educational activities, aimed at the international community of scholars as well as the Thai public in general.

In the long-term management of Ban Chiang, the traditional agrarian character of the property’s setting will be maintained. There will also be additional archaeological surveys conducted in and adjacent to the property in order to identify, protect, and research associated prehistoric sites.