The Central Amazon Conservation Complex makes up the largest protected area in the Amazon Basin and is one of the planet’s richest regions in terms of biodiversity. It also includes an important sample of varzea ecosystems, igapó forests, lakes and channels which take the form of a constantly evolving aquatic mosaic that is home to the largest array of electric fish in the world. The site protects key threatened species, including giant arapaima fish, the Amazonian manatee, the black caiman and two species of river dolphin. 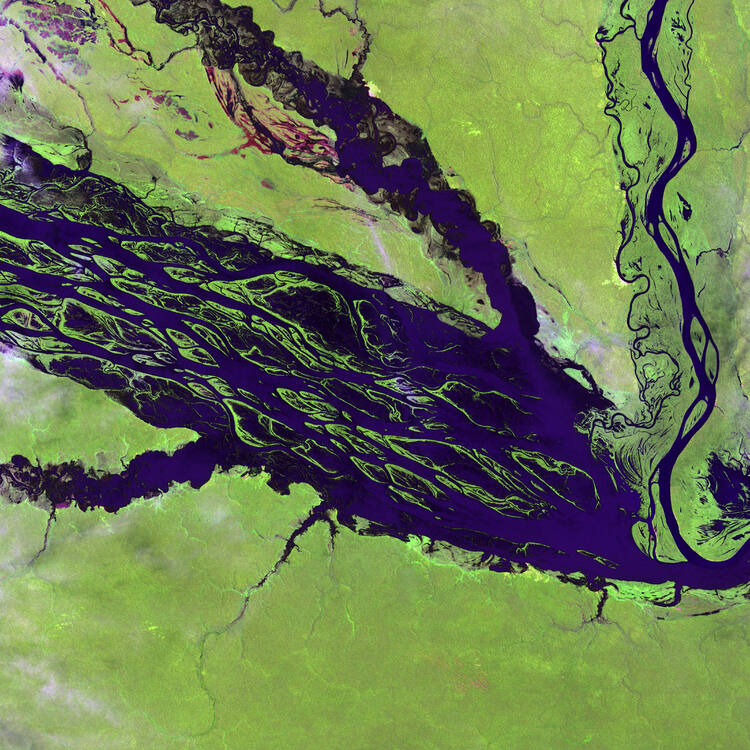 The land to the left of the river is the eastern edge of the Jau National Park. The park is the largest forest reserve in South America and covers an area greater than 5.6 million acres. © Public Domain

This site of more than 6 million hectares is the largest protected area in the Amazon Basin and one of the richest areas of the planet in terms of biodiversity. First, Jaú National Park was inscribed in 2000. The property was subsequently expanded in 2003 with the addition of three other protected areas (Anavilhanas National Park, Amanã Sustainable Development Reserve, and Mamairauá Sustainable Development Reserve). The classification of these four sites developed into the current property entitled Central Amazon Conservation Complex.

Located primarily at the confluence of the Negro and Solimões Rivers, the property contains the majority of the ecosystems recorded in the Amazon, including dryland forests and periodically flooded lowland forests (várzea and igapó, as well as black-water or white-water watercourses, waterfalls, swamps, lakes and beaches. The Anavilhanas Archipelago, one of the largest river archipelagos in the world, is constantly evolving and is home to the largest array of electric fish on the planet. The site protects a wide variety of flora and fauna, including rare and endangered species such as the giant Arapaima (the largest freshwater fish in South America), the giant otter, Amazonian manatee, the black caiman and two species of freshwater dolphins.

Criterion (ix): The várzea and igapó flooded forests, lakes, rivers and islands of the site demonstrate ongoing ecological processes in the development of terrestrial and freshwater ecosystems. They include a constantly changing and evolving mosaic of river channels, lakes, and landforms. In constant movement, the floating mats of vegetation typical of the várzea watercourses include a significant number of endemic species and the largest array of electric fishes in the world. Anavilhanas contains the second largest river archipelago in the world, much better preserved than the larger Mariuá Archipelago, located in the same river upstream of Anavilhanas. It illustrates the process of colonization and evolution of the vegetation on changing landforms.

Criterion (x): The property protects a large and representative sample of the flora and fauna of the forests of the Amazon Central Plain, with a significant number of terrestrial and aquatic ecosystems associated with the forest which are periodically inundated by seasonal flooding, as well as swamps. Known as one of the largest Endemic Bird Areas and also as a Centre of Plant Diversity, the property protects an impressive variety of flora and fauna species of which around 60% of the fish species living in the Negro River watershed, and 60% of the birds recorded in the Central Amazon region. Characterized by a high degree of endemism, much of the wildlife is nocturnal. The property represents one of the most diverse regions for primates, with endangered species such as the bald uakari (Cacajao calvus) and black squirrel monkey saimiri (Saimiri vanzolinii) and some endangered water species as the giant otter (Pteronura brasiliensis), the Amazonian manatee (Trichechus inunguis) and the black caiman (Melanosuchus Niger).   Other notable species are the golden-backed black uakari (Cacajao melanocephalus), yellow caiman (Caiman crocodilus), jaguar (Panthera onca) and harpy eagle (Harpy harpyja), the last two being "near threatened" according to the IUCN Red List. The “pirarucu” (Arapaima gigas), the largest freshwater fish in South America, and two species of river dolphins (Inia geoffrensis and Sotalia fluviatilis), all three with a "data deficient" status, are also found in the property. In addition, 64 species of electric fish, which is the strongest known diversity for this group unique in the world, with a circulation range and an adaptation rate comparable to those of cichlids in the African Rift Valley, have been identified in the property

The dimensions of the property are sufficient to maintain important ecological and biological processes, such as chablis, fluctuations in the dynamics of flooding and wildfires, which offers unique opportunities to study their effects on biodiversity in natural ecosystems. The dryland forests which constitute a large part of Jau and Amanã are virtually pristine wilderness areas covering millions of hectares.

The site has an excellent degree of conservation in terms of biodiversity resulting from the territorial scope of the property and the protective effect generated by the ecological corridor formed by protected areas. The boundaries of the property are mostly naturally defined by the rivers of the region and enclose large areas where anthropogenic impact levels are low. However, some of them, with a few thousand people whose survival depends on the exploitation of natural resources, do not have protection or active management It is important that all necessary measures be taken to ensure the conservation of the unique ecosystems of the region and the sustainable use of their resources, in cooperation with the stakeholders. There is no future development project that could compromise the integrity of the site.

Protected areas that are part of the Central Amazon Conservation Complex were created at distinct periods: the Jaú National Park in 1980, the Anavilhanas Ecological Station in 1981 (relisted as a National Park in 2008), the Mamirauá Sustainable Development Reserve in 1990 and the Amanã Sustainable Development Reserve of in 1998. The National Parks are managed by the Chico Mendes Institute for Biodiversity Conservation (ICMBio), an autonomous federal agency under the Ministry of Environment. The Sustainable Development Reserves are linked to the State, and managed by the Amazonas State Conservation Units Centre (CEUC). With the exception of the Amanã Reserve, the other three protected areas have a management plan. The availability of technical, human and financial resources is essential to consolidate the management of the property.

In order to ensure a participatory management as stipulated in the Brazilian legislation, National Parks have advisory boards for their operation, and the Sustainable Development Reserves have legislative councils. It is important to continue to involve indigenous people in the management of the property, while recognizing that this is a long-term activity. The needs related to international tourism and those of research require Jaú and Mamirauá to have well-defined public use plans.

To ensure the conservation of the protected areas, protection plans are implemented by the various responsible agencies. Scientific research and environmental education activities are encouraged and developed in the Complex. All protected areas of the property are also part of the Biosphere Reserve, which comprises, with other areas, the "Mosaic of Protected Areas of the Lower Rio Negro." The whole is integrated into an extensive regional ecological corridor programme, within environmental programmes and policies designed to guarantee integration of the management and conservation of this vast portion of the Amazon biome. 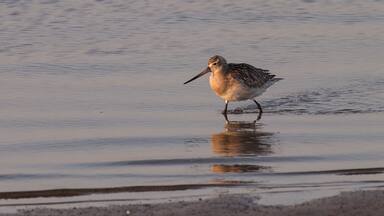 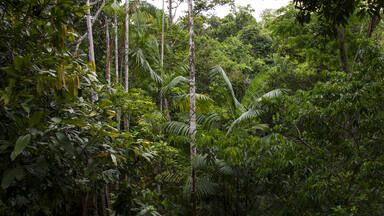