The Ciudad Universitaria de Caracas, built to the design of the architect Carlos Raúl Villanueva, between 1940 and 1960, is an outstanding example of the Modern Movement in architecture. The university campus integrates the large number of buildings and functions into a clearly articulated ensemble, including masterpieces of modern architecture and visual arts, such as the Aula Magna with the "Clouds" of Alexander Calder, the Olympic Stadium, and the Covered Plaza. 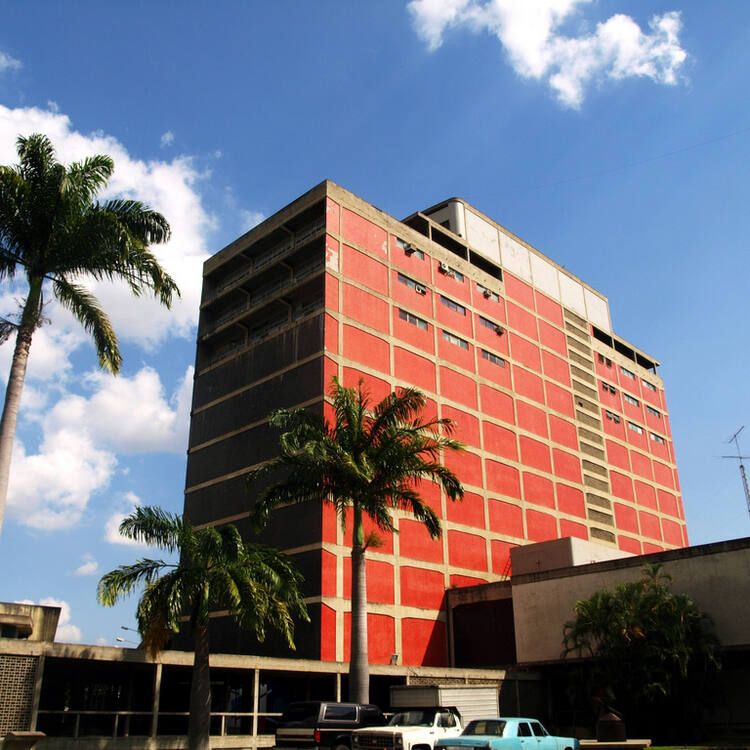 Located in Caracas, capital city of Venezuela, South America, the main campus of the Universidad Central de Venezuela, was established in the colonial period by Simon Bolivar. Covering an area of 164,203 hectares, the site includes masterpieces of architecture and modern art built to the design of architect Carlos Raúl Villanueva, between 1940 and 1960, and includes the Botanical Garden. The University integrates a large number of buildings, art and nature into a clearly articulated ensemble, creating an open and dynamic space, where the art forms become an essential part of the inhabited place. The forms and structures express the spirit and technological development of their time in the use of reinforced concrete. Key architectural structures include the Aula Magna with the ‘Clouds’ of Alexander Calder, the Olympic Stadium, and the Covered Plaza. The complex constitutes a modern interpretation of urban and architectural concepts and traditions, incorporating patios and latticed windows as an appropriate solution for its tropical environment.

Developed over a period of more than twenty years under the direction of Villanueva, the complex has undergone more recent changes as the University caters for an increased population.

Criterion i: The Ciudad Universitaria de Caracas is a masterpiece of modern city planning, architecture and art, created by the Venezuelan architect Carlos Raúl Villanueva and a group of distinguished avant-garde artists.

Criterion iv: The Ciudad Universitaria de Caracas is an outstanding example of the coherent realization of the urban, architectural, and artistic ideals of the early 20th century. It constitutes an ingenious interpretation of the concepts and spaces of colonial traditions and an example of an open and ventilated solution, appropriate for its tropical environment.

Ciudad Universitaria de Caracas continues to retain the unity of projects developed by Carlos Raúl Villanueva. Technical vulnerabilities are related to the behavior and decay of the building materials and structures, especially the concrete structures, which after more than fifty years are presenting challenges for their conservation, as well as structural issues relating to soil conditions. Another problem is the detachment of surface materials such as mosaics on some building facades. In view of the increase of the student population, from 6.000 to 50.000 currently, and anticipated future growth, infrastructure and technological networks must be updated. Changes in use have resulted in expansion or subdivision of spaces, as well as the introduction of technical facilities and equipment, carried out without proper control of their quality and adequacy to the architectural context. A systematic monitoring program has been established for the art works, but the maintenance of these is difficult to finance. The property is also vulnerable to social unrest.

The general layout and setting of the University campus has been retained, even though there have been minor modifications and changes related to the functional needs of the institution. A complete set of documentation of the original project has been kept by the University and it is planned to make this available to the public. Since its nomination there have been minor changes to existing buildings as well as some new constructions. There are also some problems of maintenance of the buildings that still need to be addressed. As a whole, however, the site can be considered to satisfy the test of authenticity in terms of design, materials, workmanship and setting. All the interventions to the buildings, works of art and landscape have been registered and documented and the preventive, corrective and regular maintenance and updating of basic services (water, sewage and electricity) have not affected the outstanding universal value or the image of the property.

The Consejo de Preservacion y Desarrollo de la Universidad Central de Venezuela– COPRED (Venezuelan Central University Preservation and Development Council) is the management decision-making structure, operating since 2001. In 2008 and looking for a reinforcement of the basic daily operational works, the area of maintenance that was part of COPRED became a separate entity. The Botanical Garden has its own management structure. COPRED coordinates these two dependencies. Since its creation, COPRED has developed several studies to provide for an integral protection of the site and at present, the institution is developing a comprehensive management plan due to be presented as part of the periodic report in 2012.

The university campus is an integral part of the modern city of Caracas and relevant regulations from the legal protection are being integrated in the approved Plan of Local Urban Development of the municipality of Libertador. However, there is a need to reinforce the coordination between the different levels at national, regional and local authorities (Instituto del Patrimonio Cultural (Institute of Cultural Heritage), Metropolitan Mayor (Alcaldía Metropolitana), Capital District (Distrito Capital) and Libertador Municipality (Alcaldía Libertador).

No buffer zone was identified at the moment of inscription since the hills to the north and the highways to the north-east and south-east provide protection. However, the growth of the residential/commercial areas to the south and west boundaries require definition of a buffer zone.