Konso Cultural Landscape is an arid property of stone walled terraces and fortified settlements in the Konso highlands of Ethiopia. It constitutes a spectacular example of a living cultural tradition stretching back 21 generations (more than 400 years) adapted to its dry hostile environment. The landscape demonstrates the shared values, social cohesion and engineering knowledge of its communities. The site also features anthropomorphic wooden statues - grouped to represent respected members of their communities and particularly heroic events - which are an exceptional living testimony to funerary traditions that are on the verge of disappearing. Stone steles in the towns express a complex system of marking the passing of generations of leaders. 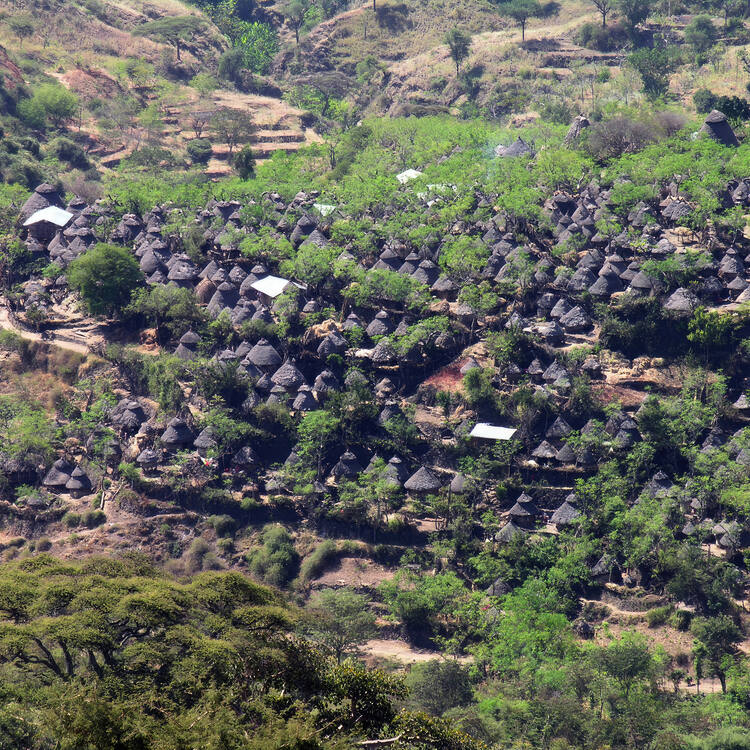 The Konso Cultural Landscape is characterized by extensive dry stone terraces bearing witness to the persistent human struggle to use and harness the hard, dry and rocky environment. The terraces retain the soil from erosion,collect a maximum of water, discharge the excess, and create terraced fields that are used for agriculture. The terraces are the main features of the Konso landscape and the hills are contoured with the dry stone walls, which at places reach up to 5 meters in height.

The walled towns and settlements (paletas) of the Konso Cultural Landscape are located on high plains or hill summits selected for their strategic and defensive advantage. These towns are circled by between one and six rounds of dry stone defensive walls, built of locally available rock. The cultural spaces inside the walled towns, called moras, retain an important and central role in the life of the Konso. Some walled towns have as many as 17 moras. The tradition of erecting generation marking stones called daga-hela, quarried, transported and erected through a ritual process, makes the Konso one of the last megalithic people.

The traditional forests are used as burial places for ritual leaders and for medicinal purposes. Wooden anthropomorphic statues (waka), carved out of a hard wood and mimicking the deceased, are erected as grave markers. Water reservoirs (harda) located in or near these forests, are communally built and are, like the terraces, maintained by very specific communal social and cultural practices.

Criterion (iii): The Konso Cultural Landscape integrates spectacularly executed dry stone terrace works, which are still actively used by the Konso people, who created them. They bear testimony to the enormous efforts required to use the otherwise hostile environment in an area that covers over 230 square km, an effort which stands as an example of major human achievement.The association between these stone terraces and the fortified towns in their midst are features of an exceptional cultural landscape, which also bears testimony toa living tradition of stele erection. The Konso erect stone steles to commemorate and mark the transfer of responsibility from the older generation to the younger. Konso are among the last stele-erecting people and thus their continuous practice presents an exceptional testimony to an ongoing cultural tradition.

Criterion (v): The relation of the stone terraces and the fortified towns of Konso Cultural Landscape, and its highly organized social system, illustrates an outstanding example of a traditional human settlement and land-use, based on common values that have resulted in the creation of the Konso cultural and socio-economic fabric.The dry stone terraces show a sophisticated adaptive strategy to the environment and the labor needed to construct these terraces necessitated a strong cohesion and unified bond among the clans. This interaction with the environment is based on indigenous engineering knowledge and requires traditional work divisions, which are still utilized to consistently perform maintenance and conservation works.

The boundaries of the Konso Cultural Landscape coincide with natural features, like rivers or edges of densely terraced landscape, and are demarcated by the cultural and socio-economic history of the Konso people. All components relevant to the understanding of the traditional system have been included, such as the key tangible attributes of terraces, walled settlements, sacred forests, shrines and burial sites. The clear distinctive character of the landscape is vulnerable to dispersal of the fortified settlements, in case houses are built outside the town walls.

The Konso Cultural Landscape still largely retains its original form and design. The materials used for the construction of the terraces and the town walls are original and their conservation continues following traditional practices, executed by the community members. The terraces continue in their original arrangements, use and function. The walled towns are still inhabited by the communities and remain organized following the traditional system. The traditionally protected forests are still protected and used for ritual and burial and the water reservoirs remain in use and are periodically conserved. Associated traditions, which continue shaping the landscape, such as the ritual erection of generation and man-hood stones and generation trees continues to be actively practiced. The same applies for the use of the moras and the erection of wakas on the graves. The communities nurture the traditional code of respect to the culture and adherence to the age group (hela) and the ward (kanta), which is responsible for the protection and conservation of the attributes and continues the traditional guardianship.

The property is protected by traditional, regional and federal laws. The regional ‘Proclamation to provide for the protection of Konso Cultural Landscape Heritage’ (2010) gives protection to the nominated area including the 12 walled towns and endorses the traditional management system. The traditional code of management is practiced side by side with the modern administrative system and elected community members and elders ensure the protection and management of the cultural properties. In addition, management committees are formed at different levels – community and district – and a Konso Cultural Landscape Management Office with governmental personnel has been established on-site, to address primarily planning, funding, supervision and conservation tasks. Development is strictly regulated in the 2010 proclamation and no development may occur within 50 meters of the outermost walls of the fortified towns.

A management plan sets out in detail the current management structures and explains how the Konso community, through its recognized village committees and the district management committee, will endeavour to ensure the necessary standards of conservation. Presentation and visitor management strategies could yet be better addressed by the community to be of more benefit to the community itself. Supportive funds, including through international cooperation, could contribute to the long-term viability of the traditional management system.