In the late 18th and early 19th centuries the small Thuringian town of Weimar witnessed a remarkable cultural flowering, attracting many writers and scholars, notably Goethe and Schiller. This development is reflected in the high quality of many of the buildings and of the parks in the surrounding area. 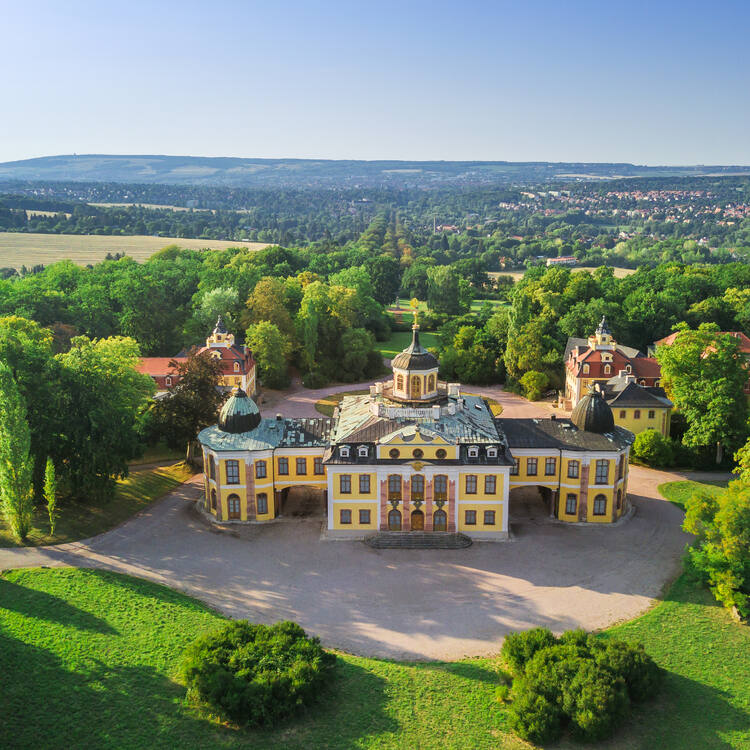 In the late 18th and early 19th century the small Thuringian town of Weimar witnessed a remarkable cultural flowering, attracting many writers and scholars, notably Goethe (1749-1832) and Schiller (1759-1805). This development is reflected in the high quality of many buildings and parks in the surrounding area.

It was in the lifetime of Duchess Anna Amalia (1739-1809) that Weimar’s Classical period began. She appointed the poet Christoph Martin Wieland (1733-1813) as tutor to her sons in 1772. It was after Carl August (1757-1828) had succeeded to the Duchy that Johann Wolfgang Goethe settled in the town (1775). Johann Gottfried Herder (1744-1803) came to Weimar in the following year. The high point of the town's cultural influence resulted from the creative relationship between Goethe and Friedrich Schiller that began in 1794 and was intensified when Schiller moved to Weimar in 1799.

Criterion (iii): The high artistic quality of the public and private buildings and parks in and around the town testify to the remarkable cultural flowering of the Weimar Classical Period.

Criterion (vi): Enlightened ducal patronage attracted many of the leading writers and thinkers in Germany, such as Goethe, Schiller, and Herder to Weimar in the late 18th and early 19th century, making it the cultural centre of the Europe of the day.

Classical Weimar includes all elements necessary to express the Outstanding Universal Value of one of the most influential cultural centres in Europe. It is of adequate size to ensure the features and processes which convey the significance of the property.

Despite the considerable degree of restoration and reconstruction required as a result of wartime damage, the level of authenticity of these properties is high. Every effort has been made to use the extensive documentation available to ensure the accuracy of reconstruction work, and there has been scrupulous attention to the use of authentic materials in most cases.

All components of the property, with the exception of the Historic Cemetery, are listed in the monuments list of the Free State of Thuringia (Denkmalbuch des Freistaates Thüringen), and are thus protected under the provisions of the relevant monuments protection law (Thüringer Denkmalschutzgesetz) of 7 January 1992. In addition, all except the City Church, Herder House, the Old High School, the Residence Castle, and the Historic Cemetery are covered by the law of 8 July 1994 establishing the Foundation Klassik Stiftung Weimar (Thüringer Gesetz über die Errichtung der Stiftung Weimarer Klassik). These laws impose strict controls over all activities in or around the components that may adversely affect their state of conservation or their surroundings.

The City Church and Herder House are church property, belonging to the Evangelical-Lutheran Congregation of Weimar (Evangelisch-lutherische Kirchgemeinde Weimar). The Old High School and the Historic Cemetery are owned by the City of Weimar. Part of the Residence Castle, theBastille  (Hofdamenhaus), is owned by the Foundation for Thuringian Castles and Gardens (Stiftung Thüringer Schlösser und Gärten). This body, like the Foundation Klassik Stiftung Weimar, which is the owner of the remaining components of the property, is a foundation under public law responsible for the management of public goods.

A management plan has been developed which prioritizes conservation measures and includes strategies for visitor management, risk prevention and development pressure. The management plan is given to local and regional government offices as a basis for planning and will serve as an implementation guide for the supervising administrations.