The List Studley Royal Park including the Ruins of ...
Print

In the 18th century a designed landscape of exceptional beauty was created around the ruins of the Cistercian Fountains Abbey, in Yorkshire. The spectacular ruins of the 12th century abbey and water mill, the Jacobean mansion of Fountains Hall, the Victorian masterpiece St Mary’s Church and one of the most magnificent Georgian water gardens ever created, make this a landscape of outstanding merit. 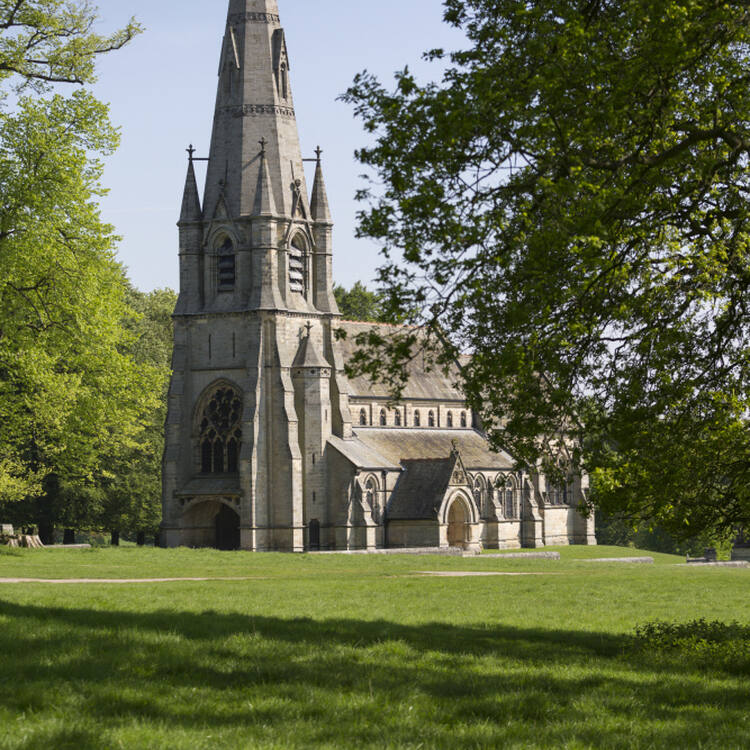 Situated in North Yorkshire, the 18th century designed landscape of Studley Royal water garden and pleasure grounds, including the ruins of Fountains Abbey, is one harmonious whole of buildings, gardens and landscapes. This landscape of exceptional merit and beauty represents over 800 years of human ambition, design and achievement.

Studley Royal Park is one of the few great 18th century gardens to survive substantially in its original form, and is one of the most spectacular water gardens in England. The landscape garden is an outstanding example of the development of the ‘English’ garden style throughout the 18th century, which influenced the rest of Europe. With the integration of the River Skell into the water gardens and the use of ‘borrowed’ vistas from the surrounding countryside, the design and layout of the gardens is determined by the form of the natural landscape, rather than being imposed upon it. The garden contains canals, ponds, cascades, lawns and hedges, with elegant garden buildings, gateways and statues. The Aislabies’ vision survives substantially in its original form, most famously in the spectacular view of the ruins of Fountains Abbey itself.

Fountains Abbey ruins is not only a key eye catcher in the garden scheme, but is of outstanding importance in its own right, being one of the few Cistercian houses to survive from the 12th century and providing an unrivalled picture of a great religious house in all its parts.

The remainder of the estate is no less significant. At the west end of the estate is the transitional Elizabethan/Jacobean Fountains Hall, partially built from reclaimed abbey stone. With its distinctive Elizabethan façade enhanced by a formal garden with shaped hedges, it is an outstanding example of its period.

Located in the extensive deer park is St Mary’s Church, a masterpiece of High Victorian Gothic architecture, designed by William Burges in 1871 and considered to be one of his finest works.

Criterion (i): Studley Royal Park including the ruins of Fountains Abbey owes its originality and striking beauty to the fact that a humanised landscape was created around the largest medieval ruins in the United Kingdom. The use of these features, combined with the planning of the water garden itself, is a true masterpiece of human creative genius.

Criterion (iv): Combining the remains of the richest abbey in England, the Jacobean Fountains Hall, and Burges’s miniature neo-Gothic masterpiece of St Mary’s, with the water gardens and deer park into one harmonious whole, Studley Royal Park including the ruins of Fountains Abbey illustrates the power of medieval monasticism and the taste and wealth of the European upper classes in the 18th century.

The Studley Royal Park was at its most extensive under the ownership of William Aislabie in the latter part of the 18th century. It is one of the few great 18th century gardens to survive substantially in its original form. The landscape design has been little altered by subsequent owners, who mainly respected and only modestly enhanced the original designs by their additions. However, many landscape features disappeared and the maintained part of the gardens contracted due to lack of maintenance. A number of decaying buildings and landscape features from the late 18th century were also removed and parts of the estate were sold to different owners. Despite the changes to the estate, the attributes, which express the Outstanding Universal Value, remain intact and evident today. The integrity and authenticity of the ruins of Fountains Abbey is high as is that of St Mary’s Church and Fountains Hall.

The property as a whole has high authenticity in terms of form, design, materials, function, location and setting of the features of the great 18th century designed landscape. However, in common with many other cultural sites, particularly those that develop in an organic way such as parks and gardens, both the fabric and design of the landscape at Studley Royal have been continually altered, first throughout the period of inception (up to c. 1781), and thereafter by a mixed process of maturity, modification, aging and decline. Natural growth, impact of climatic events and development can have both positive and negative impacts on the landscape, as can later design interventions and alterations to its physical fabric.

There have been numerous conservation interventions since inscription which were necessary to ensure the Outstanding Universal Value of the property is maintained. Conservation works in the garden, to the many garden buildings and to the Abbey and other buildings, have adhered to good conservation practice and have been thoroughly researched and documented. Fountains Hall, Porter’s Lodge and the Cistercian Water Mill have been sensitively reused to enhance visitor enjoyment of the site. The water garden has been affected by climatic events, such as flooding, but pragmatic modifications, such as the use of modern engineering technology, has enabled conservation of the water garden design.

The UK Government protects World Heritage properties in England in two ways. Firstly, individual buildings, monuments, gardens and landscapes are designated, under the Planning (Listed Buildings and Conservation Areas) Act 1990 and the 1979 Ancient Monuments and Archaeological Areas Act, and secondly, through the UK Spatial Planning system under the provisions of the Town and Country Planning Act 1990.

Since 1983, the Fountains Abbey and Studley Royal Estate has been owned and managed by the National Trust in partnership with English Heritage. English Heritage is responsible for conservation of the abbey under a guardianship agreement. St Mary’s Church is owned by the State and managed by the National Trust under a local management agreement. Whilst currently not within the World Heritage property boundary, later land additions to the National Trust estate hold significant historical features such as the Swanley Grange part of the monastic grange complex and How Hill, a scheduled monument, which also contains one of John Aislabie’s earliest 18th century eye catchers.

The property is important for its recreational values and has an unusually long history of tourism, beginning in the 17th century. Each year over 300,000 people come to the paying area and an estimated 150,000 people visit the deer park. Visitor income generated on the estate is retained on site and used for conservation and access projects. The National Trust monitors the number of visitors who come to the property and their physical impact on the landscape to inform access arrangements and ensure the necessary protection of the property. The main visitor facilities, services and car parking are provided at the Visitor Centre to protect the character of the historic area from intrusive modern developments and to minimise the impact of cars on the historic landscape.

There are a range of statutory and non-statutory designations on the property. Fifty four buildings and structures on the site have been listed under the Listed Buildings and Conservation Areas Act 1990 as buildings of special architectural and historical interest. The abbey and its surroundings is a scheduled monument. The whole site is Grade 1 on the English Heritage Register of Parks and Gardens in England. The majority of the site also lies within the Nidderdale Area of Outstanding Natural Beauty (AONB).

Protection of the estate’s artefacts and chattels collection is currently provided by various agencies. Other than the Trust, the main repositories are English Heritage and North Yorkshire County Council.

The World Heritage Site Management Plan for Fountains Abbey and Studley Royal was reviewed, involving a wide audience in developing the Plan. The key priorities set out in the plan include the restoration of the garden and parkland, the production of a Conservation Management Plan, the protection of the setting of the World Heritage property, implementing water management adapting to climate change, promoting sustainable management, improving environmental performance, and engaging people and partnerships. Implementation of the World Heritage Site Management Plan is monitored by a Steering Group, which includes the National Trust, English Heritage, Harrogate Borough Council and ICOMOS UK. The Steering Group also coordinates an annual stakeholder event involving a wider range of partners, including Natural England, Nidderdale AONB, the Environment Agency, local community groups and neighbouring landowners.

play_arrow Studley Royal Park including the Ruins of Fountains ... (UNESCO/NHK)