Litomyšl Castle was originally a Renaissance arcade-castle of the type first developed in Italy and then adopted and greatly developed in central Europe in the 16th century. Its design and decoration are particularly fine, including the later High-Baroque features added in the 18th century. It preserves intact the range of ancillary buildings associated with an aristocratic residence of this type. 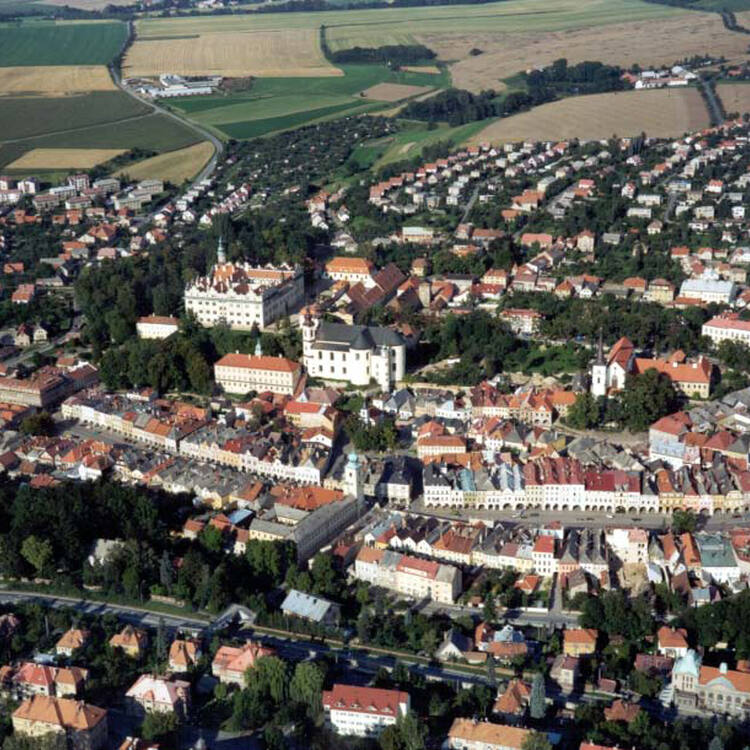 The Litomyšl Castle is an outstanding example of an arcaded Renaissance country residence, a type of structure first invented in Italy and then developed in the Czech Lands to create a mature form with special architectural value. Situated at an important communications junction on the main route between Bohemia and Moravia, in the Pardubice region, Litomyšl was a fortified centre on the hill where the castle now stands.

The work on the Renaissance building began in 1568 under the supervision of Jan Baptista Avostalis (Giovanni Battista Avostalli), who was soon joined by his brother Oldřich (Ulrico). Most of the work had been completed by 1580. The castle interior underwent alterations between 1792 and 1796, based on the designs of Jan Kryštof Habich, but he was careful to preserve the fine building’s Renaissance appearance with impressive gables.

The castle is a four-winged, three-storeyed structure with an asymmetrical disposition. The western wing is the largest, whereas the southern wing is a two-storeyed arcaded gallery, closing the second square courtyard (a feature that is unique to Litomyšl). The groin-vaulted arcading continues around the western and eastern sides of the courtyard. The south-eastern corner of the eastern wing contains the castle chapel. One of the most striking features in the interior of the castle consists in the fine neoclassical theatre from 1796-97 in the western wing. The original painted decoration of the auditorium, stage decorations and stage machinery have survived intact. The house has richly decorated interiors, basically Renaissance in form and with lavish late Baroque or neoclassical ornamentation in the form of elaborate plasterwork and wall and ceiling paintings.

The buildings associated with the castle were all built or rebuilt during the course of the modifications that the castle itself underwent over time, and this is reflected in their architectural styles. Among the ancillary buildings, the most interesting is the Brewery, the birthplace of Bedřich Smetana, one of the greatest Czech composers of all time. It lies to the south of the first courtyard. Originally constructed to complement the castle, with Renaissance sgraffito decoration, it was remodelled by the well-known architect František Maximilián Kaňka after the 1728 fire and received what is its present appearance. The ensemble also includes the former French formal garden with its saletta (pavilion) in the Baroque style and an 18th-century English-style park.

Criterion (ii): Litomyšl Castle is an outstanding and immaculately preserved example of the arcaded castle, a type of building first developed in Italy and modified in the Czech Lands to create an evolved form of special architectural quality.

Criterion (iv): Litomyšl Castle illustrates in an exceptional way the aristocratic residences of central Europe in the Renaissance and their subsequent development under the influence of new artistic movements.

All the key elements which the outstanding universal value of the property is based upon, e.g. the former aristocratic residence, the garden, the entrance courtyard and the outbuildings, are located within its boundaries. Its delimitation and size are appropriate. None of the physical attributes of the property are under threat. The castle has retained all of its original features (the integrity of the ensemble and the ground plan of the main building), its high artistic quality (the formal logic of the three-storeyed arcaded galleries, the scenic sgraffiti, the “Late Baroque Classical” interior decoration) and the relation of the ensemble to its urban setting. The vistas have also been preserved. The buffer zone is delimited; it consists of a declared urban heritage reservation and its protective zone, which both have stabilized urban structures.

The authenticity of the property is high. The individual components remain physically integrated with one another in their original state, whilst the complex retains its spatial relationship with its historic urban setting. The successive modifications and conservation works that have taken place over several hundred years have been respected. No attempt has been made to select a particular period to display, but instead the organic evolution is presented in its entirety. The current form and appearance, including the floors with open Renaissance arcades in the courtyard and sgraffito decorations on the facades and on the gables, are defined by the original design. Restoration works have been performed using the materials and historical techniques that complied with international standards for heritage conservation.

The property is protected under Act No. 20/1987 Coll. on State Heritage Preservation as amended as a designated national cultural heritage site. It thus enjoys the highest degree of legal protection. The buffer zone of the property consists of the historic centre of the town, which is designated as an urban heritage reservation and has a protective zone itself. On the territory of the property and of its buffer zone, no change in the urban area is planned.

Sustainable use of ancillary buildings is the main goal of the completed Castle Hill Revitalization project, which also includes some contemporary, however reversible, architectural interventions within the property. Key long-term issues of the main castle building (inadequate use or incipient deterioration of particular parts) are being addressed by newly drafted project reflecting also Castle Hill Revitalization experience.

Since 2000, annual monitoring reports have been prepared at the national level to serve the World Heritage site manager, the Ministry of Culture, the National Heritage Institute and other agencies involved.