In the 14th century, this city in the South of France was the seat of the papacy. The Palais des Papes, an austere-looking fortress lavishly decorated by Simone Martini and Matteo Giovanetti, dominates the city, the surrounding ramparts and the remains of a 12th-century bridge over the Rhone. Beneath this outstanding example of Gothic architecture, the Petit Palais and the Romanesque Cathedral of Notre-Dame-des-Doms complete an exceptional group of monuments that testify to the leading role played by Avignon in 14th-century Christian Europe. 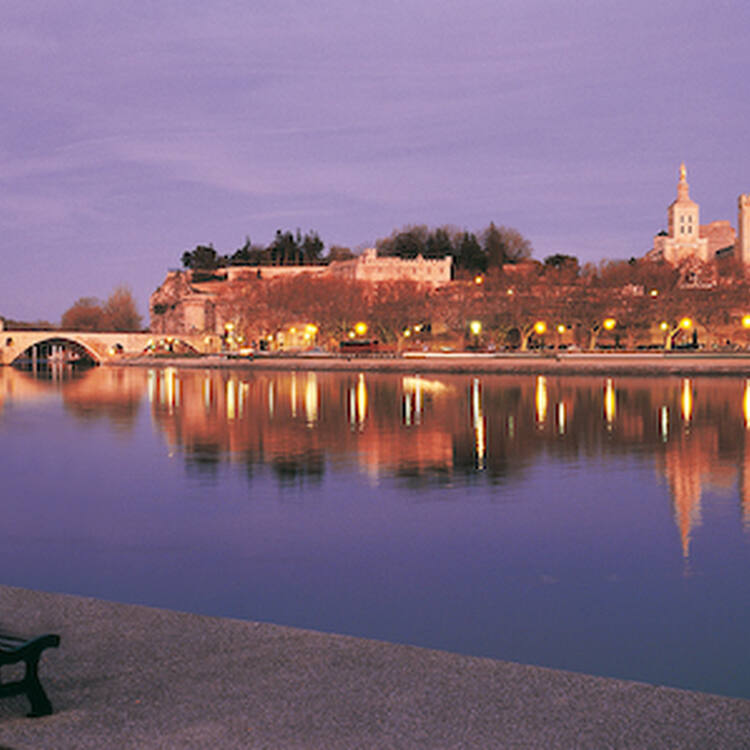 Located on the banks on the Rhône River in the Provence-Alpes-Côte-d’Azur region, Avignon is known as the City of the Popes. Its historic centre, comprising the the Papal Palace, the Episcopal ensemble and the Avignon Bridge, is an outstanding example of medieval architecture.  Resulting from an exceptional episode in history, which involved the seat of the Church leaving Rome for a century, it played a major role in the development and diffusion of a particular form of culture throughout a vast region of Europe, during a time of primordial importance in the establishment of sustainable relations between the papacy and the civil authorities.

The massive Papal Palace, “the most well-fortified house in the world” as described by the writer Froissart, forms with the city and the Rocher des Doms a homogeneous ensemble and outstanding landscape. Inside the Palace, the intricate painted decor of the 14th century reflects the brilliance of the papal court and its artistic ambitions.

The most characteristic elements of the Palais Vieux are the vast Consistory Hall leading to the Chapel of St John, decorated by Giovannetti, and above it the Tinel, or Feast Hall, decorated by the same artist. Two towers rise to the north of this wing of the palace, including the Trouillas Tower (at a height of 52 m), one of the highest medieval towers. The palace also houses the private papal apartments. The day room of Clement VI, the Stag Room, is decorated with very important frescoes representing rustic scenes. This room gives access to the Great Chapel of the Palais Neuf; its heavy vault is braced by a massive flying buttress that spans the neighbouring street. The west wing of the Palace, known as the Wing of the Great Dignitaries, is occupied by the Grande Audience (Great Audience Chamber) or Hall of Justice.

The Cathedral of Notre-Dame des Doms, lying to the north of the Papal Palace, dates from 1150. The Gothic chapels were added between the 14th and 17th centuries: the apse was demolished and rebuilt in an enlarged form in 1671-72, work which resulted in the destruction of the medieval cloister.

The Petit Palais (Small Palace), begun in 1317, was originally the residence of the bishops of Avignon. It was later expanded during the 14th and 15th centuries.

At the foot of the north side of the Rocher des Doms, the ramparts, the Tour des Chiens (Dog Tower), Châtelet (Gatehouse) constitute the defences of the city.

Only four of the twenty-two original arches that comprised the Saint Bénézet Bridge have survived. The Chapel of St Nicolas, partly Romanesque and partly 15th century, occupies part of the second pier.

Criterion (i): The ensemble of the monuments of the Historic Centre of Avignon offers an outstanding example of ecclesiastical, administrative and military medieval architecture.

Criterion (ii): The Historic Centre of Avignon testifies to an important exchange of influences that radiated throughout a wide area of Europe during the 14th and 15th centuries, in particular in the field of art and architecture.

Criterion (iv): The Historic Centre of Avignon is an outstanding group of late medieval buildings associated with an important episode in the history of the Papacy.

The monumental urban ensemble, located in the heart of the historic city, has retained its integrity despite the vicissitudes of history. The Papal Palace, which became the Legates’ and Vice-Legates’ Palace, was then tranformed into barracks after the Revolution, and reverted at the beginning of the 20th century to a use consistent with its dignity and its history. The Cathedral of Notre-Dame des Doms has conserved its function and its integrity. The Saint Bénézet Bridge, with its history closely linked to the humours of the river, still retains its gatehouse access and four arches sufficiently well preserved to testify to its history and its importance.

Overall, despite the accidents of history, the edifices that comprise the Historic Centre of Avignon have retained sufficient authenticity to enable the appreciation of the architectural coherence and to express the Outstanding Universal Value that it represents.

The Papal Palace, despite many alterations, has regained a certain authenticity thanks to various restoration campaigns that enabled, among others, the safeguarding of the priceless painted decor of the Papal apartments and the Saint-Martial Chapel. The Episcopal Palace had an identical destiny, while the cathedral, despite transformations during the Baroque period, has preserved its architectural integrity.

Requirements for management and protection

The Papal Square, the Small Palace, the ramparts, the St Bénézet Bridge, the garden and the Promenade des Doms belong to the commune; the Papal Palace is also municipal property, with the exception of the north-west part, including the Chapel of Benedict XII and the Trouillas Tower, which belong to the Department of Vaucluse. The Cathedral of Notre-Dame des Doms belongs to the State.

All the buildings of the property are protected under the Heritage Code, and some have already been included on the Historic Monuments List since 1840.

The Garden of the Rocher des Doms is a listed site since 1933. Avignon intra-muros is an exceptional heritage site, with its safeguarding and enhancement plan approved in 2007. The Papal Palace, the Episcopal ensemble and the St Bénézet Bridge are listed as Historic Monuments.

The management system of the property involves many actors, the State and the City being the principal managers according to their competences. The municipality coordinates this management in consultation with the management committee of the property, comprising these different actors.

A buffer zone and management plan project is under study.