These two large Etruscan cemeteries reflect different types of burial practices from the 9th to the 1st century BC, and bear witness to the achievements of Etruscan culture. Which over nine centuries developed the earliest urban civilization in the northern Mediterranean. Some of the tombs are monumental, cut in rock and topped by impressive tumuli (burial mounds). Many feature carvings on their walls, others have wall paintings of outstanding quality. The necropolis near Cerveteri, known as Banditaccia, contains thousands of tombs organized in a city-like plan, with streets, small squares and neighbourhoods. The site contains very different types of tombs: trenches cut in rock; tumuli; and some, also carved in rock, in the shape of huts or houses with a wealth of structural details. These provide the only surviving evidence of Etruscan residential architecture. The necropolis of Tarquinia, also known as Monterozzi, contains 6,000 graves cut in the rock. It is famous for its 200 painted tombs, the earliest of which date from the 7th century BC. 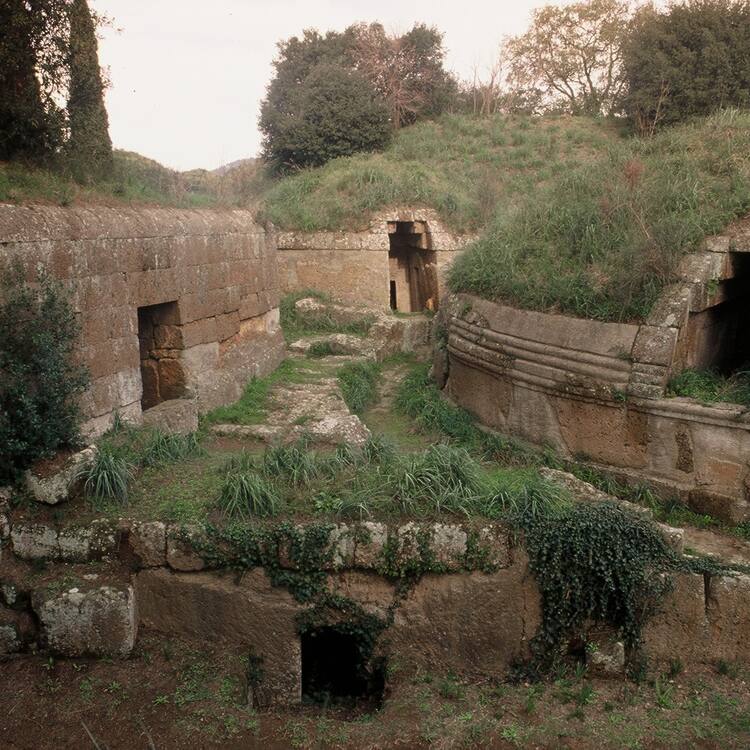 The property encompasses the two necropolises of the Banditaccia and the Monterozzi, the most important cemeteries of the ancient Etruscan city-states of Cerveteri and Tarquinia. These two cities were built near the western coast in central Italy, north of the city of Rome. Together, they have provided the majority of the most significant archaeological discoveries associated with this civilization over a period of nine centuries. The two necropolises and their buffer zones cover a large area – a whole property of 326.93 ha and a buffer zone of 4,932.11 ha.

The necropolis near Cerveteri, known as the Banditaccia, contains thousands of tombs organized in a city-like plan, with streets, small squares, and neighbourhoods. The 197.57 ha site dates from the 9th century BCE and contains very different types of tombs: trenches cut in rock; tumuli which often contain more than one tomb; and some, also carved in rock, in the shape of huts or houses with a wealth of structural details. The Banditaccia necropolis, among the largest in antiquity, reproduces the ‘city of the living’. Because there is little surviving written information on the Etruscans, this site provides exceptional testimony of Etruscan domestic architecture from archaic times to the Hellenic period.

The whole necropolis of Tarquinia, also known as Monterozzi, contains 6,000 graves cut into the rock. Covering 129.36 ha, it is one of the most extensive complexes known. Tarquinia is famous for its 200 painted tombs, the earliest of which date from the 7th century BCE. These paintings provide the only major testimony of classic artwork of pre-Roman times existing in the Mediterranean basin.

Together, the Etruscan cemeteries at Cerveteri and Tarquinia offer the sole important attestation of this population that created the first urban culture in the western Mediterranean, surviving for around 700 years, from the eighth to the first century BCE in central Italy, extending from northern Latium to Tuscany.

The necropolises have been known for centuries. Michelangelo visited Tarquinia during the Renaissance and a related sketch is held in Florence’s Buonarroti Archives.

Criterion (i): The necropolises of Tarquinia and Cerveteri are masterpieces of creative genius: Tarquinia's large-scale wall paintings are exceptional both for their formal qualities and for their content, which reveal aspects of life, death, and religious beliefs of the ancient Etruscans. Cerveteri exceptionally testifies in a funerary context the same town planning and architectural schemes used in an ancient city.

Criterion (iii): The two necropolises constitute a unique and exceptional testimony to the ancient Etruscan civilisation, the only urban type of civilisation in pre-Roman Italy. Moreover, the depiction of daily life in the frescoed tombs, many of which are replicas of Etruscan houses, is a unique testimony to this vanished culture.

Criterion (iv): Many of the tombs of Tarquinia and Cerveteri represent types of buildings that no longer exist in any other form. The cemeteries, replicas of Etruscan town planning schemes, are some of the earliest existing in the region.

The property and the buffer zone that encircles the necropolises of Cerveteri and Tarquinia, includes all the territory covered in ancient times by the two inhabited centres and the other numerous cemeteries surrounding them. The two archaeological sites cover a vast area, most of it already excavated. The property is in a good state of conservation and is continually monitored by the competent authorities of the ministry responsible for cultural heritage.

Several tombs at Cerveteri discovered at the beginning of the 20th century, including the Tomba dei Rilievi (Tomb of the Reliefs), and the tombs known as ‘dei Sarcofagi’, 'del Triclinio’ and ‘dell’Alcova’ had artefacts removed to the private collection of Marquis Campana and later to various museums in Italy and abroad (including the Louvre and the Hermitage). Although in the 1960s, some of the wall paintings from Tarquinia were removed and placed in museums, this practice is no longer happening. The archaeological museums, related to each of the necropolises, are situated adjacent to the sites and included within the buffer zone.

The necropolises cover a large area, extending into the buffer zone, including privately-owned lands. At Tarquinia, efforts are made to acquire these private parcels for the State.

Authorities are aware that the property is threatened by some illegal building within the buffer zone primarily on agricultural land at Cerveteri. Additionally, the impact of tourism on the fragile archaeological remains, particularly the painted tombs, is a concern.

The necropolises of Cerveteri and Tarquinia preserve our information relating to Etruscan civilization, both for its town planning and for its domestic architecture. The surviving topography is consistent with the design of the ancient Etruscan town sites on plateaus. Moreover, the authenticity of the property is confirmed by the permanency of the architectural structure of the tombs, whose interior safeguards painted decorations of inestimable value, which are still distinctly visible. Additionally, the preservation of the city-like plan at Banditaccia includes the preservation of the form, design, and materials of the structural tombs.

All conservation work has been carried out in compliance with the national Restoration Code and its stated principles including the use of local materials and craft techniques.

The entire Banditaccia archaeological site at Cerveteri was some time ago expropriated for public use and consequently the property is state owned and is part of the ‘cultural domain’. The Monterozzi necropolis at Tarquinia has been only partially expropriated (the Calvario area, the Scataglini necropolis, and the Doganaccia tombs), and is both state owned and privately owned. The national legislation, under Legislative decree, n. 42/2004 provides appropriate safeguarding measures, ensuring total control over archaeological assets, managed by the ministry responsible for cultural heritage. Referring both to the property and the buffer zone, national, regional and local legislation provides further regulation with reference to the protection of landscape interest and territorial governance.

In accordance with national legislation, the entire property and the buffer zone fall within the area declared by the State as a “zone of archaeological interest” and is under the strictest rules for protection, which ensure that any activity on the site must be authorized by the ministry responsible for cultural heritage. Excavation must be carried out or authorized by the ministry.

Many interdisciplinary studies have investigated the reasons for the decay of the property and the possible pre-emptive measures. The main identified threats affecting the necropolises are related to environmental factors. The main risks to the painted tombs result from the opening of these sites to visitors, whose presence negatively impact the thermal and humidity conditions. Fire risk is also present at the necropolises, due to summer drought.

Management of the property falls within the responsibility of the ministry responsible for cultural heritage that assures protection, conservation, and public and social enjoyment.

A fenced area within the property is open daily to visitors. (Two parking areas have been provided at the Banditaccia site for visitors and school groups.) In order to balance conservation and tourism, specific admission policy regulates the entrance of visitors to each tomb. (For example, controlled glass barriers preserve tombs at Tarquinia from micro-climatic variations.) Archaeological excavation, research, and conservation are ongoing processes on the sites.

The responsible ministry, through its peripheral branch, coordinates planning, implementation, as well as the coordination of management plan activities. Moreover, in 2003, the ministry responsible for cultural heritage, the Lazio regional government authority, and Cerveteri and Tarquinia municipalities signed a Memorandum of Understanding to work jointly towards the protection and rehabilitation of the areas surrounding the necropolises. Regular patrols by local wardens combat illegal building in the buffer zone.

The two municipalities also contribute to the Management Plan’s implementation and the improvement. Both Cerveteri and Tarquinia municipalities collaborate in a cultural promotion plan that provides specific educational activities in public schools.