The List Medici Villas and Gardens in Tuscany
Print

Medici Villas and Gardens in Tuscany

Medici Villas and Gardens in Tuscany

Twelve villas and two gardens spread across the Tuscan landscape make up this site which bears testimony to the influence the Medici family exerted over modern European culture through its patronage of the arts. Built between the 15th and 17th centuries, they represent an innovative system of construction in harmony with nature and dedicated to leisure, the arts and knowledge. The villas embody an innovative form and function, a new type of princely residence that differed from both the farms owned by rich Florentines of the period and from the military might of baronial castles. The Medici villas form the first example of the connection between architecture, gardens, and the environment and became an enduring reference for princely residences throughout Italy and Europe. Their gardens and integration into the natural environment helped develop the appreciation of landscape characteristic Humanism and the Renaissance. 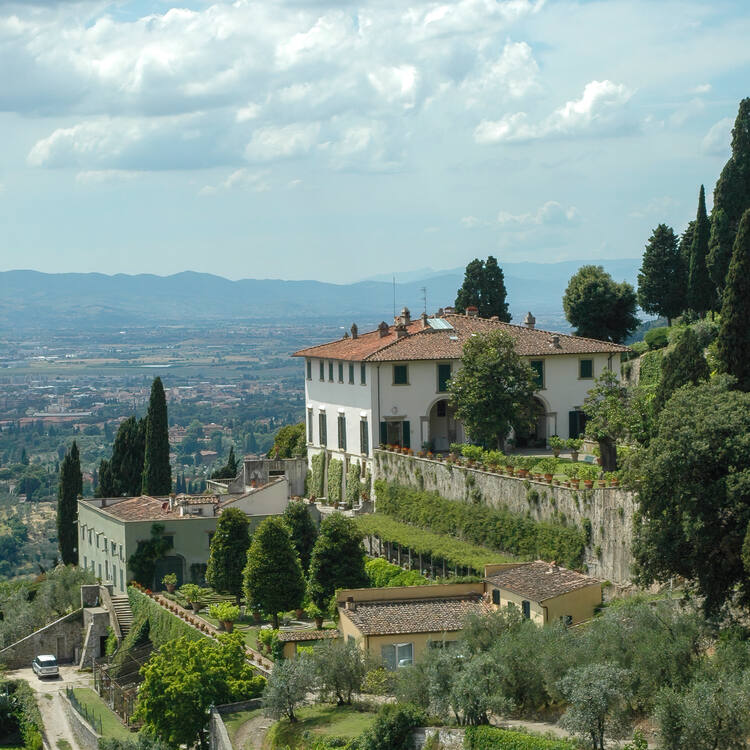 The economic, financial and political fortunes of the Medici were behind extensive patronage that had a decisive effect on the cultural and artistic history of modern Europe. Among the resulting architectural and aesthetic forms, the Medici villas in deep harmony with their gardens and rural environment are among the most original of the Italian Renaissance. The nominated property is a selection of twelve complete villas with their gardens and two additional pleasure gardens spread across the Tuscan countryside and near to Florence. The Medici villa and its gardens embody an ideal of the princely residence in the country where it was possible to live in harmony with nature, and dedicate as much to leisure pastimes as to the arts and knowledge.

Criterion (ii): The Medici villas and gardens in Tuscany are testimony to a synthesis of the aristocratic rural residence, at the end of the Middle Ages, which made material a series of new political, economic and aesthetic ambitions. Villas and gardens formed models that spread widely throughout Italy during the Renaissance and then to the whole of modern Europe.

Criterion (iv): The Medici baronial residences provide eminent examples of the rural aristocratic villa dedicated to leisure, the arts and knowledge. Over a period spanning almost three centuries, the Medici developed many innovative architectural and decorative forms. The ensemble is testimony to the technical and aesthetic organisation of the gardens in association with their rural environment, giving rise to a landscape taste specific to Humanism and the Renaissance.

Criterion (vi): The villas and gardens, together with the Tuscan landscapes of which they are a part, made an early and decisive contribution to the birth of a new aesthetic and art of living. They are testimony to exceptional cultural and artistic patronage developed by the Medici. They form a series of key locations for the emergence of the ideals and tastes of the Italian Renaissance followed by their diffusion throughout Europe.

Despite some reservations due to the changes made to certain of the sites and their environment, at times affected by changes in use and modern development, the serial nomination forms an ensemble with sufficient integrity to testify in a credible and satisfactory manner to its Outstanding Universal Value. The serial composition has been fully justified. A significant effort to preserve the characteristic landscapes associated with the sites, and still surviving today, has been announced by the State Party.

The serial property includes villas and gardens listed as national monuments. They are subject to Italian laws on the protection of historic monuments or as cultural sites of national value. These legislative texts are implemented under the Regional Orientation Plan of the Region of Tuscany, then within each municipality through approved structural plans. In addition to the buffer zones, a series of listed or protected landscape zones has been instituted for all the sites, except two (Nos 9 and 10).

An adequate individual management system is in place at each of the sites, together with technical coordination for conservation actions, under the aegis of the Region of Tuscany and the Ministry for Cultural Heritage and Activities. This cooperation for standardised and agreed management was recently extended and formalised in the Memorandum of Understanding, a deed shared by the property’s various partners (Ministry, Region, 4 provinces and 10 municipalities). It has led to the creation of a Steering Committee for the serial property that is scheduled to begin operation starting in fiscal year 2013. It is responsible for monitoring the implementation of the Management Plan, and coordinating the property’s protection, promotion and communication. The Committee will be supported by a Technical Bureau and an Observatory for the property and its conservation. However, their actual implementation needs to be specified. Furthermore, while the conservation of each of the sites is adequately organised, its overall planning should be better highlighted in the Management Plan.