The List Pre-Hispanic City and National Park of ...
Print

A prime example of a Mayan sanctuary of the classical period, Palenque was at its height between AD 500 and 700, when its influence extended throughout the basin of the Usumacinta River. The elegance and craftsmanship of the buildings, as well as the lightness of the sculpted reliefs with their Mayan mythological themes, attest to the creative genius of this civilization. 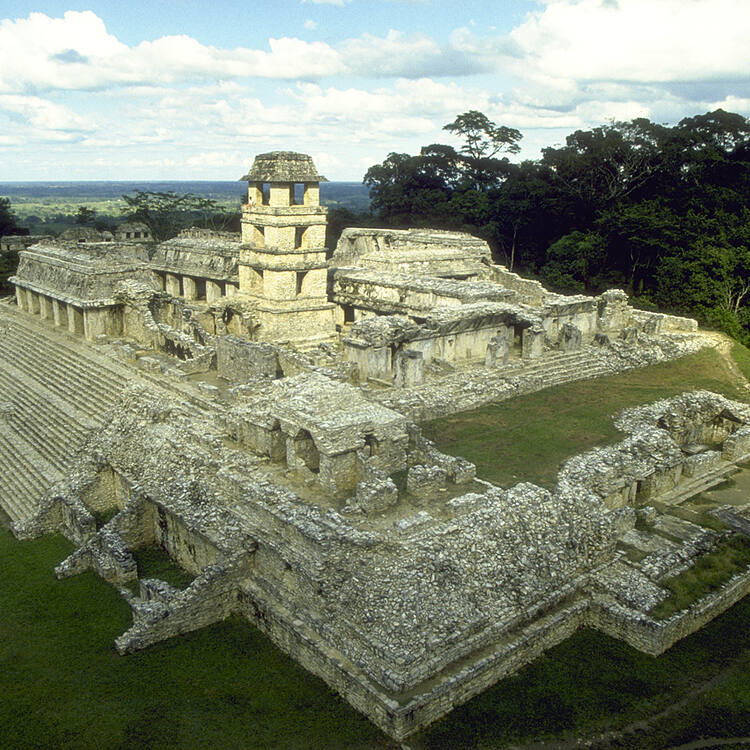 The archaeological site of Palenque in the state of Chiapas is one of the most outstanding Classic period sites of the Maya area, known for its exceptional and well conserved architectural and sculptural remains. The elegance and craftsmanship of the construction, as well as the lightness of the sculpted reliefs illustrating Mayan mythology, attest to the creative genius of this civilization.

The city was founded during the Late Preclassic, which corresponds to the beginning of the Christian era. Its first inhabitants probably migrated from other sites in the nearby region. They always shared the cultural features which define the Maya culture, as well as a level of development that allowed them to adapt to the natural environment. After several centuries, ca. 500 A.D., the city rose to be a powerful capital within a regional political unit. Without a buffer zone the total area of the archeological site is 1780 hectares, 09 areas and 49 square meters and 1,400 buildings have been recorded, of which only about 10% have been explored.

Palenque has been the object of interest of numerous travelers, explorers and researchers since the 18th century. It illustrates one of the most significant achievements of mankind in the American continent. The ancient city has a planned urban layout, with monumental edifices and some of the largest clearings found in all the Maya area. Numerous residential areas with habitation units, funerary, ritual and productive activity areas were placed around the administrative and civic ceremonial centre. The palencano style is unique for its high degree of refinement, lightness and harmony.  It includes buildings with vaulted roofs upon which pierced crestings emphasized its height. Its architecture is also characterized by its interior sanctuaries and modeled stucco scenes found on its freezes, columns, walls, crests, as well as ogival vaults, vaulted halls connecting galleries and T-shaped windows, among other unique architectural features. The sophisticated architectural designs and the rich decoration reflect the history and ideology of the ruling class and incorporate the writing and calendaric systems. The architecture of the site is integrated in the landscape, creating a city of unique beauty.

Criteria (i): Palenque is an incomparable achievement of Mayan art. The structures are characterized by a lightness which resulted from the new construction techniques and drainage methods that were developed in order to reduce the thickness of the walls. The expanded interior space, multiple openings, and the use of galleries give the architecture a rare elegance, richly decorated with sculptures and stucco of a type never previously seen.

Criteria (ii): The influence exerted by Palenque was considerable throughout the basin of the Usumacinta, extending even as far away as Comalcalco, on the western border of the Mayan cultural zone.

Criteria (iii): Palenque bears a unique testimony to the mythology and the rites of the Mayas, notably in the incredible number of sculpted reliefs on interior walls of the palaces and temples.

Criteria (iv): Older than the ensemble at Tikal, whose major monuments were constructed a hundred years later, the group of ceremonial buildings at Palenque is an outstanding example of a ceremonial and civic site corresponding to the middle of the Classic period in the Maya area.

Once the ancient city of Palenque was abandoned around the 9th century, the thick jungle surrounding it covered its temples and palaces. This vegetation largely protected the buildings and their elements from looting. Furthermore, the fact that the area remained uninhabited, from its abandonment until the Colonial period, aided the protection of the site’s integrity.

Residential areas, buildings with political and administrative functions, as well as those whose function was ritual are conserved in their original setting, turning the site with its exceptional artistic and architectural features into a living museum.

All elements to convey the Outstanding Universal Value of the property have been preserved. However, there are a number of threats to these conditions, including the decay of the material fabric and the presence of uncontrolled informal vending within the site and the growing number of visitors - which today reaches 600,000 per year. These threats require sustained attention so that the conditions of integrity are maintained and no additional impacts are derived from excessive use or inadequate infrastructure development to provide services.

As in the case of the site’s integrity, the authenticity of the site and its elements was protected by the dense vegetation and the fact that the city was abandoned already in pre-Hispanic times. Furthermore, factors like the choice of durable raw materials and high quality manufacturing techniques aided in the conservation of the material culture of Palenque and in conserving the form and design of the property.

Although exploration at the site had started much earlier, the first maintenance work on the monuments at Palenque was not undertaken until around 1940. Now maintenance has to be incessant in order to avoid negative impacts caused by climatic factors and/or vegetation, which pose constant threats. Conservation interventions that have largely utilized original materials have not compromised the overall authenticity of the property but care needs to be exercised to define the extent of interventions and the use of compatible materials.

The principal authority responsible for the protection of the archaeological site is the National Institute of Anthropology and History (INAH) and the National Commission for Protected Natural Areas (CONANP).  The latter is in charge of the conservation of the natural resources within the area of the National Park, which is protected since 1981.  In 1987 UNESCO recognized the archaeological site as World Heritage and in 1993 the site was declared an Archaeological Monument by the Mexican Federal Government, so as to be protected under the Federal Law on Archaeological, Artistic and Historic Monuments and Sites.

Nevertheless, much work remains to be done in order to effectively ensure the protection and conservation of the World Heritage property in the long term. Currently, measures regarding its protection are considered in the Planning project for the management of heritage sites, which seeks the participation of all the actors involved in the conservation, protection, research and promotion of the site, since it is they who live and act in its immediate context. This strategic planning incorporates a long-term view, attention to global issues in the future scenarios and the real possibilities of projecting the conservation beyond the daily activities in the operation and administration of the site.