The List Historical Centre of the City of Yaroslavl
Print

Situated at the confluence of the Volga and Kotorosl Rivers some 250 km north-east of Moscow, the historic city of Yaroslavl developed into a major commercial centre from the 11th century. It is renowned for its numerous 17th-century churches and is an outstanding example of the urban planning reform Empress Catherine the Great ordered for the whole of Russia in 1763. While keeping some of its significant historic structures, the town was renovated in the neoclassical style on a radial urban master plan. It has also kept elements from the 16th century in the Spassky Monastery, one of the oldest in the Upper Volga region, built on the site of a pagan temple in the late 12th century but reconstructed over time. 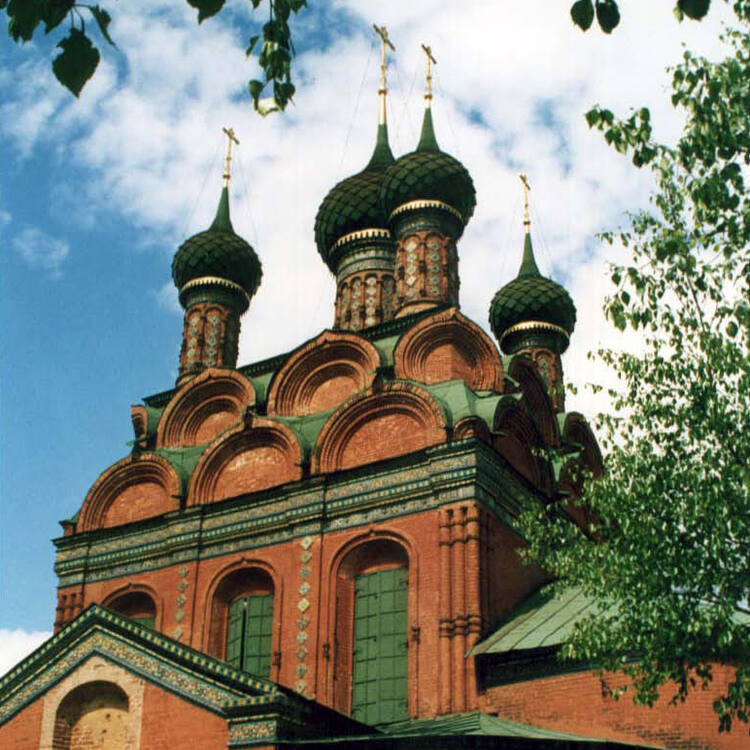 Church of Epiphany, Historical Centre of the City of Yaroslavl

The city of Yaroslavl is situated on the Volga River at its confluence with the Kotorosl River, some 250 km northeast of Moscow. It was founded by the Prince of Kievan Russia Yaroslav-the-Wise (988-1010) and consisted of a small wooden fortress. Until the 13th century, it had belonged to the territory of Rostov Principality and in 1218 it became the capital of Yaroslavl Principality. The city of Yaroslavl started developing in 1463 when Yaroslavl Principality joined the powerful Moscow state. After several fires, and starting from the 16th century, the original wooden town was gradually rebuilt in stone.

The Historical Centre of the City of Yaroslavl is the oldest part and the kernel of development of one of the most ancient, rich, and well preserved Russian cities. The historic centre is a representative example of the development of the planning structures of ancient Russian cities, which was subject to regular urban re-development as a part of unique town-planning reform pursued by Empress Catherine the Great at the end of 18th century. Solutions developed and implemented in Yaroslavl ensured preservation of the historical environment and spatial integrity in the central part of the city. The Historical Centre of the City of Yaroslavl became a recognised model in the art of town planning during the Neoclassical Age, which has organically incorporated ancient elements of the city’s historical structure.

The historical centre of Yaroslavl comprises a large number of town-planning elements representing the development of Russian architecture of the 16th to 18th centuries. The property consists of the historic centre of the city, the Slobody, forming roughly a half circle with radial streets from the centre. It is essentially Neoclassical in style, with harmonious and uniform streetscapes. Most residential and public buildings are two to three storeys high along wide streets and urban squares. A specific and unique feature of Yaroslavl is the existence of numerous 16th- and 17th-century churches and monastic ensembles with valuable mural paintings and iconostases, which are outstanding in terms of their architecture, as dominant town-planning elements and composition centres. The main merits of the town-planning structure and architectural face of Yaroslavl city centre are the rational approach to activation of artistic values of the past within the city system, and the subordination of further architectural constructions to them, using the contrast between picturesque ancient churches and distinctly regular, symmetrical, composed classical buildings of the later periods.

Another particularity is the organic use of the rich natural landscape at the junction of two rivers, with their picturesque banks and wide water expanses. They reveal marvellous sights of well-equipped embankments with the best buildings constructed there.

Criterion (ii): Historical Centre of the City of Yaroslavl with its 17th-century churches and its neoclassical radial urban plan and civic architecture is an outstanding example of the interchange of cultural and architectural influences between Western Europe and the Russian Empire.

Criterion (iv): Historical Centre of the City of Yaroslavl is an outstanding example of the town-planning reform ordered by Empress Catherine The Great in the whole of Russia, implemented between 1763 and 1830.

The vast majority of all the attributes and elements expressing the Outstanding Universal Value are within the property border. The property has adequate size (110 ha) to ensure the complete representation of the features and processes which convey the property’s significance. The 580 ha buffer zone provides also the protection to maintain the conditions of integrity.

All the attributes of the property are still present in good condition, and dynamic functions between them are maintained. The most significant monuments of cultural heritage in the historical centre of the city are architectural complexes of central streets, squares and embankments. In addition, among the most important architectural objects of the centre of Yaroslavl are the Spaso Preobrazhensky monastery founded in the 12th century with walls and towers of the 16th to19th centuries, and the 17th-century Church of the Epiphany.

The conditions of integrity are threatened by the violation of the historical horizontal skyline with dominating elements, in particular, the serious changes to the town-planning due to the construction of the Uspenskiy Cathedral. Other factors that require attention include the gradual change of the town-planning structure, new construction projects and restoration projects that adapt to modern functions.

From the town-planning point of view, the inscribed property has retained its authenticity. It is noted that, differing from many other renovation projects in the Soviet period, the banks and islands of the Kotorosl River have been preserved, retaining the historic town with its rare natural framework. Even the river port on the Volga built in the 1980s does not interfere excessively with the town-planning composition. In the Stalinist period, thousands of churches were demolished especially in larger cities in Russia. On the other hand, in Yaroslavl, out of some 80 churches and chapels, 56 have survived intact. This number has no comparison in other parts of Russia. Even though some churches were used as workshops or warehouses, they have usually retained their artistic finishes. Only a minimum of restoration is required and it has already been started with several buildings. The work done so far is considered to respond to required standards. The residential buildings, dating from 18th to early 20th centuries, have survived almost completely. Parts of the masonry fortifications have also been preserved in the northern and north-eastern section of the town, as well as the towers of the Virgin and Uglic, and the Volga Gates.

Within the management system, the process of licensing for construction and restoration works within the boundaries of the property and its buffer zone is arranged in accordance with the official legal instruments and regulations.

The Historical Centre of the City of Yaroslavl is included in the List of heritage properties of federal importance, which is managed by the Ministry of Culture of the Russian Federation.

The main management challenges that will warrant attention include the development of a methodology for assessment and exploration of the historical context of the city, and for the careful preservation of architectural and town-planning integrity. In addition, procedures for evaluation and licensing of new construction and development projects which might impact the property will need to be clarified. The mechanisms for the development of Heritage Impact Assessments prior to approval of projects will need to be defined. Finally, the enforcement of regulations to ensure that the city’s horizontal skyline is maintained, as well as the strict control of design quality, scales, materials and massing of projects of new buildings and constructions inside of the boundaries of the property and its buffer zone will also need to be adequately addressed.