Church of the Ascension, Kolomenskoye

Church of the Ascension, Kolomenskoye

The Church of the Ascension was built in 1532 on the imperial estate of Kolomenskoye, near Moscow, to celebrate the birth of the prince who was to become Tsar Ivan IV ('the Terrible'). One of the earliest examples of a traditional wooden tent-roofed church on a stone and brick substructure, it had a great influence on the development of Russian ecclesiastical architecture. 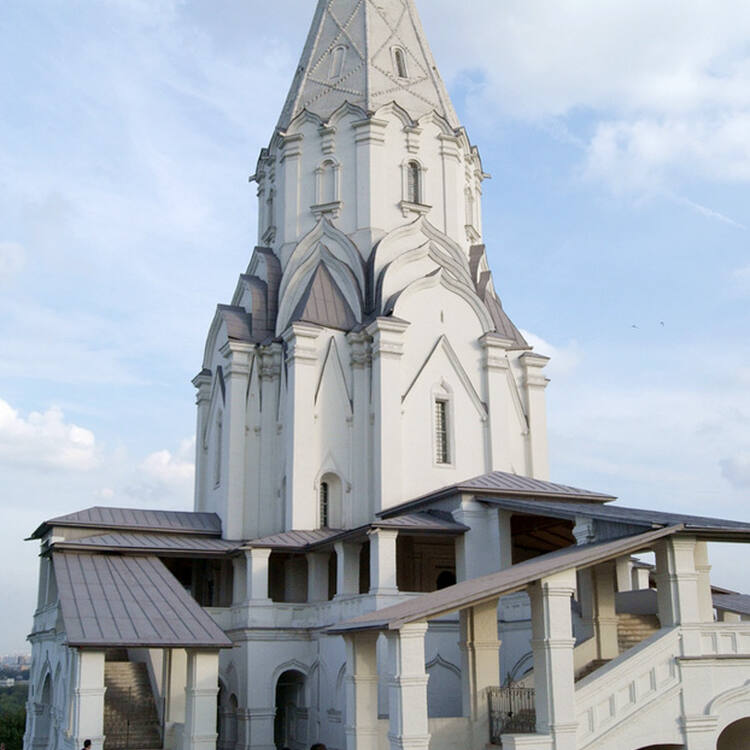 The Church of the Ascension was built in 1532, in the imperial estate of Kolomenskoye, near Moscow, to celebrate the birth of the prince who was to become Tsar Ivan IV "the Terrible". The church is now situated near the centre of Moscow on the steep slope that descends to the floodplain of the Moscow River. The church represented a new stage in Russian architecture. It is the first tent-roofed church to be built in stone. The remarkable tent roof rises from an octagonal base crowned by small kokoshniks; the base itself also rises from a larger base formed by a series of tiered kokoshniks. Galleries reached by steps at various levels surround the church. In the eastern altar part of the gallery, facing the Moscow River, there is a "royal pew" in the form of a throne with a white-stone ciborium above it. Because of this specific construction, the walls are 2.5 to 3 metres thick, making the interior very small, although the 41-metre high ceilings create a feeling of spaciousness.

The church is of great importance for town planning, dominates the surrounding architectural structures and landscape, and provides visual unity to all the elements of the estate. The Church of the Ascension is unsurpassed in its marvellous beauty and elegance of form and was built in spite of the strict canons of ecclesiastical architecture in the 16th century. Its one-pillar construction differed from the usual five-domed structure on four pillars, making it more like a memorial sculpture with architectural features that incorporated the best of the Byzantine, Greek, Roman, Gothic and ancient Russian traditions. The example of the Church of the Ascension in Kolomenskoye then became widespread all over the country until the middle of the 17th century. The tent-like style was important and decisive for Russian architecture, as it later became the embodiment of the Russian national architectural tradition.

Criterion (ii): The Church of the Ascension at Kolomenskoye represents an imaginative and innovative advance in Russian Orthodox Church design, which exerted a profound influence on developments in ecclesiastical architecture over a wide area of Eastern Europe.

The Church of the Ascension at Kolomenskoye is a single whole and all the attributes expressing its Outstanding Universal Value are within the inscribed boundaries. None of the attributes are threatened by contemporary development or neglect. All the attributes are still present and have maintained physical integrity as well as the dynamic functions between them. Both the exterior and the interior of the church vividly demonstrate the unity of structural and decorative intent that is typical of Russian architecture.

Over the course of the period from 1532 to 1920, there were six different iconostases in the Church of the Ascension. During the complex restoration of 2003-2007, a complete reconstruction was undertaken based on the 'Tsar's Gates' of the original 16th-century iconostasis.

The Church of the Ascension has undergone many alterations since it was built in 1532. However, changes have been limited to the roofs of porches and to the decoration due to the complete loss of white-stone carved capitals and portals on the second tier. Regarding its volume and forms, the temple is preserved in its original form. In the early 19th century, considerable areas of the damaged surface of the brickwork were refaced with bricks manufactured especially for that purpose. In the second row of galleries, new white-stone floors were made, as well as white-stone stairs and grounds were made for all the porches. The brick floors of the 18th century were dismantled. In the 1860s, the church was restored in accordance with historical detail and ornaments - this concerns mainly the upper part of the temple: the octagonal, the tent and the cupola. In the first half of the 20th century, restoration works based on scientific elaborations were carried out as follows: white-stone of the porches and parapets were renewed; facades were renovated by replacing damaged areas and coating them with white limestone; wood structures of the galleries' roofs were reconstructed; and the cross, the sphere and chains underneath were restored and gilded.

The meticulous research that was carried out in the 1980s and subsequent restoration have restored it to a high level of authenticity in form and materials whilst the setting within the imperial estate has been preserved.

In 1918, the Church of the Ascension was proclaimed state property as an outstanding cultural and historical monument. Its status was confirmed by the Decree of the Council of the People's Commissars "On registration and protection of art and antiquity monuments being in private, society and institutional property"(1918). At the time of inscription, the property was a part of the Architectural-Archaeological and Natural Complex of the Museum Zone Kolomenskoye. Today, the monument is owned and managed by the Moscow State United Art Historical-Architectural and Nature Landscape Museum-Reserve.

The main legal act that provides the necessary framework for protection is the Federal law of 25 June 2002 No. 73-FZ “On Cultural Heritage Properties (Monuments of History and Culture) of the Peoples of the Russian Federation”. The property is a national park that maintains religious use. At present the Church of the Ascension is the patriarchal town residence under the Patriarch of the Russian Orthodox Church. Divine services are carried out on major religious holidays while the rest of time it operates as a museum.

Operational control and management of the property is up to the Moscow State Art Historical-Architectural and Nature-Landscape Museum-Reserve, which reports directly to the Department of Culture Heritage of the City of Moscow.

As part of a long-term program on conservation of historical and cultural heritage and for the development of the museum-reserve Kolomenskoye for 2003-07, some necessary activities were taken to preserve and promote the property, including the installation of an information plaque on the memorial stone with the World Heritage emblem. The eastern facade of the church also has an information table with the UNESCO emblem set in 2012.

The museum, acting on the basis of laws and regulations of the Russian Federation and those of the city of Moscow, as well as on local programs and instructions, maintains an effective site management on a full-time basis.

Regular monitoring will be essential to ensure an adequate state of conservation and to control the observance of buffer zone regulations.