Many civilizations have inhabited this small Aegean island, near Asia Minor, since the 3rd millennium B.C. The remains of Pythagoreion, an ancient fortified port with Greek and Roman monuments and a spectacular tunnel-aqueduct, as well as the Heraion, temple of the Samian Hera, can still be seen. 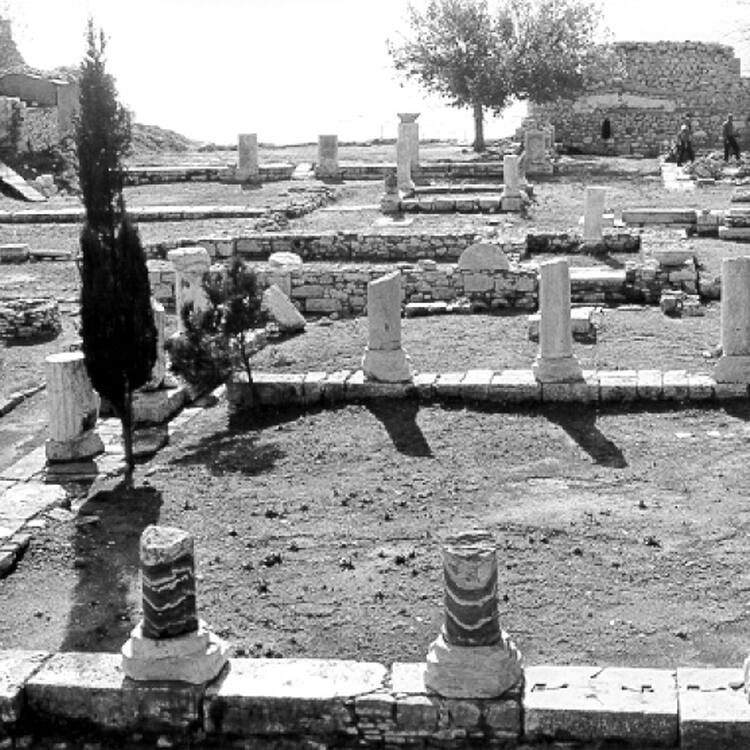 Samos, due to its geographical location in the eastern Aegean, securing easy communications with the coast of Asia Minor, was one of the most important centres of political and cultural developments from the prehistoric era (5th/4th millennium BC) until almost the Middle Ages. The site is an area on the north-east coast of the island that is clearly defined by the surrounding mountains. It consists of the fortified ancient city (Pythagoreion) and the ancient Temple of Hera (Heraion), which is situated about 6 km away from the city and indissolubly linked with it.

The earliest finds date back to the 5th/4th millennium BC, during the Neolithic period, but the main settlement began in the 10th century BC, when it was colonized by Ionians from Mainland Greece. By the 6th century BC, Samos had become a major nautical power in the eastern Mediterranean, with close trade links with Asia Minor and the Mainland Greece. It was strong enough to establish trading colonies on the coast of Ionia, in Thrace, and even in the western Mediterranean.

One of the most famous features is the Eupalinus’ tunnel dating from the 6th century BC, which runs 1036 m through the mountainside to bring water to the ancient city, the work of Eupalinus of Megara, Naustrofus’ son. Samos continued to be an important mercantile city throughout the Hellenistic and Roman periods.

The great Temple of Hera (Heraion) has its origins in the 8th century BC, when it was the first Greek temple to be one hundred feet in length (Hecatompedos). It is unknown if this temple was surrounded by a peristyle of columns; its 7th-century successor was also innovatory in that it was the first temple to have a double row of columns across the front. These were both surpassed by the temple begun around 570-560 BC by Rhoecus and Theodorus, who built a colossal structure measuring 52.5 m by 105 m, the earliest in the new Ionic order. It was supported by at least 100 columns, whose moulded bases were turned on a lathe designed by Theodorus. The works for the construction of a new temple, known as the Great Temple of the Goddess Hera, a colossal structure measuring 55.16 m by 108.63 m, and surrounded by a peristyle of 155 columns about 20 m high, were started during the reign of Polycrates (c. 535-522 BC).

The Heraion and the ancient city were adorned with splendid sculptures, making Samos one of the great centres of sculpture in the Ionic world. Offerings from all over the ancient world poured into the sanctuary of Hera. Samos is linked with great personalities of the ancient world, such as the philosopher and mathematician Pythagoras, the philosopher Epicurus, who was of Samian birth, and Aristarchus the Samian, who first established the theory of the planet system in the 4th century BC.

Pythagoreion and Heraion of Samos bear eloquent witness of the Ionian spirit. During its apogee in the 6th century BC the ancient city of Samos achieved exceptional technical and artistic progress and created innovative methods and works, thus representing a city with a high level of civilization, which merits its inclusion in the Ionian Dodekapolis.

Criterion (ii): The temple of Hera at Samos is fundamental to an understanding of classical architecture. The stylistic and structural innovations in each of its successive phases strongly influenced the design of temples and public buildings throughout the Greek world. The technological mastery of the Eupalineio similarly served as a model for engineering and public works.

Criterion (iii): Samos was the leading maritime and mercantile power in the Greek world in the 6th century BC, and this importance is reflected in the extent and richness of the archaeological remains, which are largely untouched by subsequent development.

The World Heritage property contains within its boundaries all the key attributes that convey the Outstanding Universal Value of the site. Its importance is reflected in the extent and richness of the archaeological remains, which are largely untouched by subsequent development. The remains of Samos are among the most impressive and complete in the Greco-Roman world. Threats to the integrity of the monuments, earth movement, humidity, the marine environment, illegal building and free grazing, are being dealt with.

Authenticity of the property is preserved through the implementation of conservation and restoration methods, which respect the original structures. The works carried out are aimed at the preservation of the ancient ruins, their enhancement and presentation without challenging their attributes. The interventions were minimal in order to preserve their original form as revealed after the excavations. All materials used were previously analysed in specialised laboratories in order to examine their compatibility to the ancient ones.

The property is protected under the provisions of Law No. 3028/2002, on the “Protection of Antiquities and Cultural Heritage in general”. The boundaries of the property and its buffer zone were established by Ministerial Decrees Nos. 11107/1963, 40292/ 1984, 25291/ 1968 and the Decrees published in the Official Gazette 798/D/11-11-1991 and 100/D/ 1995. Protection zones include in the case of Pythagoreion the intra-muros ancient city of Samos with a buffer zone 500 m wide and in the case of Heraion the area occupied by the ancient sanctuary with a buffer zone 2 km wide. By the ministerial decision No. YPPOT/GDAPK/ARX/A1/F21/46456/2315, published in Government Gazette no. 209/AAP/14 June 2012, the archaeological site of Heraion has been designated again as an Archaeological Site in accordance to the provisions of article 13 of Law 3028/2002.

The property is under the jurisdiction of the Ministry of Culture Education and Religious Affairs, through the Ephorate of Antiquities of Samos-Icaria, its competent Regional Service, who is responsible for the management and protection of the site. During the past decade, important restoration and visitor management works, funded by the Greek state and the European Union were implemented both in Heraion and Pythagoreion, including the creation of a new Museum at Pythagoreion.

Some of the factors that could affect the property are illegal building, free grazing of animals, earth movement and the marine environment. The competent Ephorate through its constant monitoring of the area and its interventions when necessary has addressed successfully these threats, maintaining the physical and visual integrity of the site. Furthermore, it endeavours through informative and educational activities to raise awareness of local community on site’s protection issues, especially among young people.

Regarding Heraion, particular issues have to be dealt with, such as uncontrolled vegetation growth and standing waters, both linked to the high humidity and precipitation level of the area. These negative factors are addressed through continuous removal of the vegetation and channelling of the water to the sea. Within a project for the enhancement of Heraion, carried out the period 2004-2007, visitors’ facilities and itineraries were created, while informative signs have been placed in order to familiarise visitors with the history, architecture and use of the property.

Several projects regarding the conservation and presentation of both sites are scheduled in a perspective to render accessible and ‘legible” an important part of the urban fabric in the centre of the ancient and the modern city. Conservation works on the Eupalinus’ tunnel have also been scheduled. Concurrently, the Ephorate carries out archaeological research in order to investigate the ancient topography and reveal building ensembles, so as the creation of an archaeological park would be possible in the future.