On the banks of the Zambezi, great cliffs overhang the river and the floodplains. The area is home to a remarkable concentration of wild animals, including elephants, buffalo, leopards and cheetahs. An important concentration of Nile crocodiles is also be found in the area. 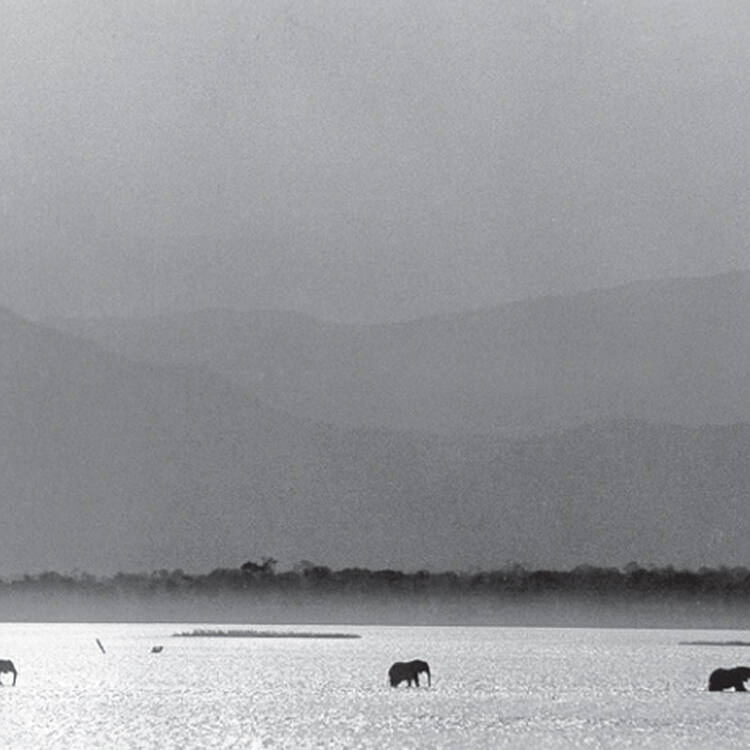 The Mana Pools National Park, Sapi and Chewore Safari Areas World Heritage Site is an area of dramatic landscape and ecological processes. Physically protected by the Zambezi River to the north and the steep escarpment (which rises to over 1,000 m from the valley floor) to the south, this substantial property of 676,600 ha provides shelter for immense congregations of Africa’s large mammal populations which concentrate in its flood plains. The Mana Pools are former channels of the Zambezi River, and ongoing geological processes present a good example of erosion and deposition by a large seasonal river including a clear pattern of plant succession on its alluvial deposits. While black rhino has disappeared since the property’s inscription, huge herds of elephant and buffalo, followed by zebra, waterbuck and many other antelope species and their associated predators including lion and hyena migrate to the area each year during the dry winter months. The river is also famous for its sizeable numbers of hippopotamus and Nile crocodile. Resident and migratory birdlife, with over 450 species recorded, is also abundant. Controlled hunting on quota is permitted in the safari areas.

Criterion (vii): The annual congregation of animals in riparian parkland alongside the broad Zambezi constitutes one Africa's outstanding wildlife spectacles.

Criterion (ix): The 'sand-bank' environment constitutes a good example of erosion and deposition by a large seasonal river (despite changes in river flow due to the Kariba Dam). There is a clear pattern of vegetation succession on the alluvial deposits. Seasonal movements of large mammals within the valley are of great ecological interest both because of interspecies and intraspecies differences.

Criterion (x): At time of inscription the justification for this criterion was that the area is one of the most important refuges for black rhino in Africa as well as a number of other species considered threatened at that time. Today, the black rhino has now disappeared from the reserve although the property still contains important populations of threatened species including elephant and hippopotamus, as well as other threatened species such as lion, cheetah and wild dog. Leopard and brown hyena, classified as near threatened, and a large population of Nile crocodile, are also protected within the property. The area is also considered an important refuge for a number of plants and birds.

The property is composed of three contiguous protected areas comprising the Mana Pools National Park (219,600 ha), Sapi Safari Area (118,000 ha) and Chewore Safari Area (339,000 ha) covering an entire area of 676,600 ha. Three other contiguous conservation areas, although not included in the property, include the Urungwe Safari Area (287,000 ha), Dande Safari Area (52,300 ha) and the Doma Safari Area (76,400 ha). In addition the Lower Zambezi National Park in Zambia (409,200 ha) is contiguous on the opposite bank of the river. It is considered that the property is relatively intact and adequately sized to maintain natural and functional ecological processes as well as to capture its natural and aesthetic values. Natural barriers created by the Zambezi River to the north and the steep escarpment to the south protect the property from environmental damage and alternative land uses. There is no permanent human habitation within the property.

The greatest threat to the integrity of the property is that the ecology of the river is dominated by the regulating effect of the Kariba Dam. There is also continued threat of the construction of another dam along the Zambezi River in the Mapata Gorge, which would effectively negate the major value of the area. The possibility of oil prospection within the reserve has also been raised.

When the property was inscribed in 1984 it contained about 500 black rhino, although due to poaching by the end of 1994 only ten animals remained. These were removed for safekeeping elsewhere, but poaching remains a problem for rhino re-introduction as well as for other species such as elephant.

The property is legally managed by the Lower Zambezi Valley Parks and Wildlife Area Policy and the Zimbabwe Parks and Wildlife Act Cap. 20: 14 of 2008 (revised). This principal legislation provides for legal protection of the resources within the property. The property has a well-defined and buffered boundary which requires physical demarcation. Each of the three areas has functional Park Integrated Management Plans which require adequate staffing and resources for their implementation. A system of regular monitoring of the natural values of the property and on-going programmes to maintain habitats and landforms in their natural state, avoid disturbance and other impacts on wildlife, and to preserve the aesthetic values are in place.

The property requires a World Heritage Property Integrated Management Plan to ensure long term priority for the protection of the natural values and to guard against encroachments and impacts from sport hunting (Sapi Safari Area), poaching, boating along the Zambezi, fishing, campsites/chalets for tourists and other inappropriate development. Management of visitor use to both prevent negative impacts and provide opportunities to experience the value of the property in a sustainable manner is a long-term requirement for the property. Plans are underway to declare the Mana Pools (Zimbabwe) and the Lower Zambezi National Park (Zambia) as a Transfrontier Park which will strengthen the management of the entire area.