The List Temple and Cemetery of Confucius and the Kong ...
Print

The temple, cemetery and family mansion of Confucius, the great philosopher, politician and educator of the 6th–5th centuries B.C., are located at Qufu, in Shandong Province. Built to commemorate him in 478 B.C., the temple has been destroyed and reconstructed over the centuries; today it comprises more than 100 buildings. The cemetery contains Confucius' tomb and the remains of more than 100,000 of his descendants. The small house of the Kong family developed into a gigantic aristocratic residence, of which 152 buildings remain. The Qufu complex of monuments has retained its outstanding artistic and historic character due to the devotion of successive Chinese emperors over more than 2,000 years. 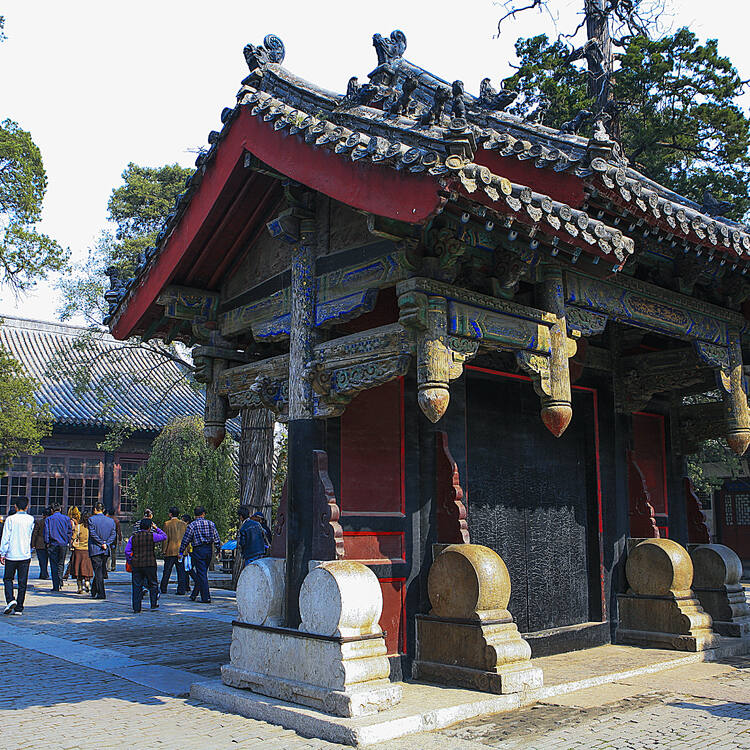 Confucius, a renowned philosopher, politician and educator in ancient China whose system of belief involving philosophy, politics and ethics (subsequently known as Confucianism) has exerted profound influence on Chinese culture, was revered as the Sacred Model Teacher for Ten Thousand Generations by Chinese emperors. Located in his birthplace, Qufu City of Shandong Province, China, the Temple of Confucius was built to commemorate and offer sacrifices to Confucius in 478 BC. Having been destroyed and reconstructed over the centuries, it now covers 14 hectares, with 104 buildings dating from the Jin to Qing dynasties including the Dacheng Hall, Kuiwen Pavilion and Xing Altar, and over 1,250 ancient trees. The Temple houses more than 1,000 stelae made at different times, and precious objects such as Han stone reliefs, carved pictures depicting the life of Confucius, and the stone dragon carvings of the Ming and Qing dynasties. The Temple is the prototype and model for all the Confucius temples widely distributed in countries in East Asia and Southeast Asia, particularly in terms of layout and style.

Located 1,100 meters to the north of Qufu City, the Cemetery of Confucius covers an area of 183 hectares. It contains Confucius’ tomb and more than 100,000 graves of his descendants.

Lying to the east of the Temple, the Kong Family Mansion developed from a small family house linked to the temple into an aristocratic mansion in which the male direct descendants of Confucius lived and worked.Following a fire and rebuilding of the temple with an enclosure wall on the model of an imperial palace in the 14th century, the mansion was rebuilt a short distance from the temple. Subsequently expanded, then destroyed again by fire and rebuilt in the late 19th century, it now covers 7 hectares with a total of some 170 buildings. Over 100,000 collections are kept in the Mansion; among them the ten ceremonial utensils of the Shang and Zhou dynasties, the portraits of Confucius made in different periods and clothes and caps dating to the Ming and Qing dynasties are the most famous. Furthermore, the more than 60,000 files and archives of the Ming and Qing dynasties collected in the Mansion not only provide a credible record of all kinds of activities in the Mansion for more than 400 years, but are highly valuable for studying the history of the Ming and Qing period.

The buildings were designed and built with meticulous care according to the ideas of Confucianism regarding the hierarchy of disposition of the various components. In the Ming period many outstanding artists and craftsmen applied their skills in the adornment of the temple, and in the Qing period imperial craftsmen were assigned to build the Dacheng Hall and Gate and the Qin Hall, considered to represent the pinnacle of Qing art and architecture.

Confucianism has exerted a profound influence not only in China but also on the feudal societies of Korea, Japan and Vietnam and had a positive influence on the Enlightenment of 18th century Europe. The Temple of Confucius, the Cemetery of Confucius, and the Kong Family Mansion are not only outstanding representatives of oriental architectural skills, but they also have a deep historical content and are an important part of the cultural heritage of mankind.

Criterion (i): The group of monumental ensembles at Qufu is of outstanding artistic value because of the support given to them by Chinese Emperors over two millennia, ensuring that the finest artists and craftsmen were involved in the creation and reconstruction of the buildings and the landscape dedicated to Confucius.

Criterion (iv): The Qufu ensemble represents an outstanding architectural complex which demonstrates the evolution of Chinese material culture over a considerable period of time.

Criterion (vi): The contribution of Confucius to philosophical and political doctrine in the countries of the East for two thousand years, and also in Europe and the west in the 18th and 19th centuries, has been one of the most profound factors in the evolution of modem thought and government.

As a heritage site embodying the core value of traditional Chinese culture—Confucianism, incorporating the Temple and Cemetery of Confucius and the Kong Family Mansion, the property area covers all the necessary elements for demonstrating its historical values and setting. The Temple reflects the paramount position of Confucianism in traditional Chinese culture. The Cemetery, as a graveyard for Confucius and his descendants, provides integral and most important material evidence for the development of the Kong Clan. The Kong Family Mansion, as the office and residence for the direct descendants of Confucius, testifies to the eminent status enjoyed by the Kong family in traditional Chinese society because of Confucianism.

The maintenance and protection of the property, which was never disrupted in Chinese history due to the property’s great significance, reflect traditional Chinese conservation intervention methods. The property possesses high authenticity in terms of design of the building complex, building materials used, continuity in construction technology, preservation of historical condition and as deliverer of spiritual values, which are all faithful expressions of traditional Chinese culture. Qufu, as the hometown of Confucius, has always been the most congregated inhabitation of his descendants, and today, the surroundings of the property still provides the most important residence for the offspring of Confucius. This social phenomenon and situation also contributes to the authenticity of the property.

The Temple and Cemetery of Confucius and the Kong Family Mansion were included in the first group of State Priority Protected Sites in 1961 and the property is protected under the Law of the People's Republic of China on the Protection of Cultural Relics. The official institution responsible for the protection and management of the property is Qufu Cultural Heritage Management Committee. A multi-source and stable fund guarantee system has been established, with specific funds allocated for heritage conservation each year. The enactment and efficient implementation of relevant national and local laws and regulations provides strong legal protection to the property.

The property boundaries and buffer zone were clearly designated in 1986. In 2003, the Master Plan for Qufu City was drawn up, and the Regulatory Plan for the Ming City of Qufu was made in 2007, regulating protection of the setting of the property. These documents provide legal, institutional and management guarantees for safeguarding the authenticity and integrity of the property. Now the protection of the heritage has been integrated into the social and economic development plan, the urban and rural construction plan, the fiscal budget, the system reform and the leadership accountability system of Qufu.

Systematic periodic and daily monitoring has been carried out, while the complete heritage monitoring system and documentation database of the property are being developed. Survey, design and implementation of intervention projects are conducted strictly in accordance with relevant laws, regulations and technical specifications, while charters relating to world cultural heritage protection have also been observed. Further measures will be taken to ensure the authenticity and integrity of the heritage and its setting, and to strive for rational use and sustainable development of the property.