Van Nellefabriek was designed and built in the 1920s on the banks of a canal in the Spaanse Polder industrial zone north-west of Rotterdam. The site is one of the icons of 20th-century industrial architecture, comprising a complex of factories, with façades consisting essentially of steel and glass, making large-scale use of the curtain wall principle. It was conceived as an ‘ideal factory’, open to the outside world, whose interior working spaces evolved according to need, and in which daylight was used to provide pleasant working conditions. It embodies the new kind of factory that became a symbol of the modernist and functionalist culture of the inter-war period and bears witness to the long commercial and industrial history of the Netherlands in the field of importation and processing of food products from tropical countries, and their industrial processing for marketing in Europe. 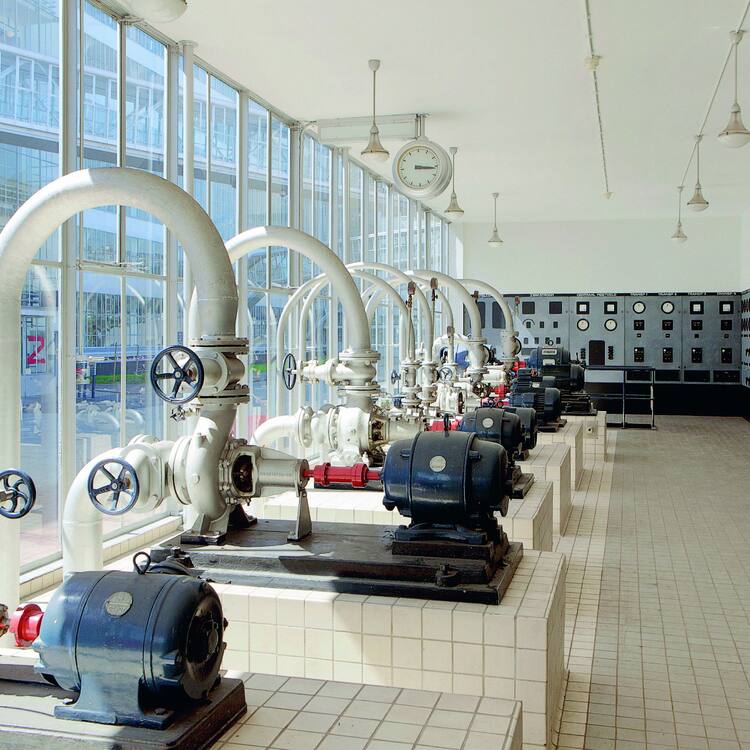 Designed and built in the 1920s, the Van Nellefabriek demonstrates an extremely accomplished industrial architecture. It comprises a complex of buildings consisting of several factories aligned along the perspective of a large internal roadway, and close to several means of transport (canals, roads, railway lines). Supported on an internal structure of reinforced concrete, the facades of the main buildings consist essentially of steel and glass, making large-scale use of the curtain wall principle. Via a common purpose agreed between the entrepreneur and the project architects and engineers, the Van Nellefabriek embodies an ideal factory, open to the outside world, whose interior working spaces are progressive, and in which daylight is used to provide pleasant working conditions. It embodies the accomplished realisation of a new kind of factory that has become a symbol of the modernist and functionalist culture of the inter-war period. Lastly it bears witness to the long port-related economic tradition of the Netherlands, in the processing of imported food products (coffee, tea and tobacco) and their marketing in Europe.

Criterion (ii): The Van Nellefabriek brings together and makes use of technical and architectural ideas originating from various parts of Europe and North America in the early 20th century. It is exceptionally successful both in terms of its industrial setup and its degree of architectural and aesthetic accomplishment. It represents an exemplary contribution by the Netherlands to the Modernism of the inter-war years, and has since its construction become an emblematic example and an influential reference throughout the world.

Criterion (iv): In the context of industrial architecture in the first half of the 20th century, the Van Nellefabriek is an outstanding illustration of the values of relationships with the environment, the rational organisation of production flows, and dispatch via the nearby communication network, maximum admission of daylight to the internal spaces via the widespread use of a glass curtain wall with metal frames, and open interior spaces. It expresses the values of clarity, fluidity and the opening up of industry to the outside world.

Throughout a long industrial history devoted to the same activity of industrial processing and packaging of food products, the various factories and their functional relationships with the logistical spaces (warehousing, dispatching, transport) have remained unchanged. The ensemble of buildings was preserved when the premises underwent an economic conversion in the late 1990s. The conditions of integrity in terms of composition (location and organisation of territory, functional relationships, panoramic views, etc.), and in architectural terms in its various aspects, have been met.

The restructuring and restoration of the property undertaken for economic reasons from 2000 to 2006 was carried out on a property which had been generally well maintained, and had never undergone reconstruction or conversion after its original construction at the end of the 1920s. The works have been carried out with great care, as part of a model project. The property’s authenticity has thus been appropriately preserved in each of its aspects, and this is clearly perceptible both to the visitors and to the new business users of the Van Nellefabriek.

The Van Nellefabriek enjoys the highest level of state protection as it has been a listed national monument since 1985. A large buffer zone has been established to ensure good visual expression of the property in an open environment. The overall protection of the whole ensemble will be guaranteed by the new Municipal urban development plan, whose drawing up is nearing completion, and by the inclusion of environmental preservation measures in the urban development plans for the five zones of its urban environment.

The property is managed by its current owner and operator, the private group Van Nelle Design Factory. The management of the conservation of the property’s architectural, urban and environmental values is based on the cooperation between the heritage departments of the City of Rotterdam and the Cultural Heritage Agency of the Netherlands. They jointly drew up the property’s management plan (January 2013) and their cooperation has been made permanent in the form of a Joint Management Committee which has been enlarged to include new experts. The property’s prime purpose is to accommodate economic activities in industrial, commercial and service fields. It is already open for visits, but this is seemingly not a major objective; frequency of visits could however increase over the coming years, giving rise to a need for specific facilities, which in turn must not be allowed to adversely affect the property’s integrity and authenticity.