The city's history of battles between Moors and Christians is reflected in its architecture, which is a blend of Roman, Islamic, Northern Gothic and Italian Renaissance styles. Of the 30 or so towers from the Muslim period, the Torre del Bujaco is the most famous. 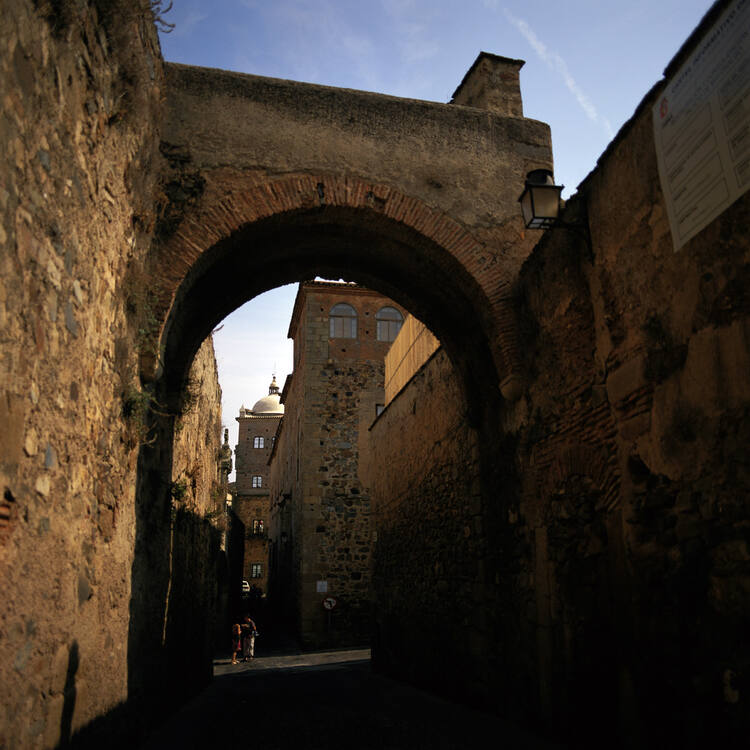 The Old Town of Cáceres is an urban ensemble of 9ha surrounded by a wall of 1,174m, located in the Autonomous Community of Extremadura in the southwest of the Iberian Peninsula.

Cáceres has been a trade route city and a political centre of the local nobles for many centuries. Since prehistoric times, people from different cultures have gathered in Cáceres and have shaped its strong historical roots. Pre-Roman settlements occupied the original plot followed by the Roman, Arab, Jewish and Christian people.

The influence and remains of these cultures can be observed and studied in the walled ensemble of Cáceres, with a wide typological and constructive variety ranging from popular architecture to palace-houses, with their characteristic sobriety and towers of the nobility of Gothic and Renaissance times. The city's history of battles between Moors and Christians is also reflected in the architecture, which is a blend of Roman, Islamic, Northern Gothic and Italian Renaissance styles. This property also includes noteworthy religious buildings such as churches, hermitages and convents.

Cáceres is an outstanding example of a city that was ruled from the 14th to 16th centuries by powerful rival factions, reflected in its dominant spatial configuration of fortified houses, palaces and towers. This city in Extremadura bears the traces of highly diverse and contradictory influences. The urban design in the area inside the walls is an example of a medieval city, which has shaped its current aspect over centuries.

Multidisciplinary research of the last decades has allowed to gain a better understanding of the evolution and substantial transformations of Cáceres, documented construction techniques in the walled city and identified a rare structural unity in the west of the historic ensemble.

Criterion (iii): The walls of Cáceres bear exceptional testimony to the fortifications built in Spain by the Almohades. Frequently compared to Torre de Espantaperros in Badajoz and to Torre del Oro in Seville, Torre Mochada in Cáceres is part of an ensemble of walls and towers, which has been largely conserved and which is representative of a civilisation.

Criterion (iv): Cáceres is an outstanding example of a city ruled during the 14th to 16th centuries by powerful rival factions, so that fortified houses, palaces and towers dominate its spatial configuration. This city in Extremadura is unique because of its historic features, which - from the Middle Ages to the classical period - bear the traces of highly diverse and contradictory influences, such as Northern Gothic, Islamic, Italian Renaissance and arts of the New World.

All the necessary elements to convey the Outstanding Universal Value of the property are located within its boundaries. The architectural ensemble and surrounding walls, characterised by the presence of fortress-houses, palace-houses and towers, retain a high level of material integrity. The defensive circle is an element of significant physical and visual power.

The property does not face major threats to its attributes that convey the Outstanding Universal Value. Public-private actions in favour of the preservation and maintenance of the property are strong, and the Special Revitalisation and Protection Plan for the Architectural Heritage of the City of Cáceres ensure that the conditions of integrity and authenticity continue to be met.

The authenticity of the property is largely maintained in the Gothic-Renaissance city, with a large amount and quality of nobility constructions (fortress-houses) from the 15th century and palace-houses from the 16th century, with a significant amount of granite masonry still preserved. Cáceres still maintains a considerable number of buildings that bear witness to the noble battles and the peace generated by the unification of the different kingdoms by the Catholic King and Queen; these can be easily interpreted thanks to the conservation of layout, form and design.

The wall of Cáceres expresses the influence of the different cultures that settled in this place from late republican Roman times to Christian domination, through the wall’s different designs and materials used by each. For example the Muslim poliorcetis, mainly during the Almohade phase when the pre-existing wall was refurbished, added the characteristic defensive towers. New towers (Púlpitos) were added and others (Bujaco) were modified during medieval Christian time.

The management of the property is the responsibility of the relevant Public Administrations, the City Council of Cáceres and the Regional Government of Extremadura. The Revitalization and Protection Special Plan of the Archaeological Heritage of the City of Cáceres (in force since 1990), Law 2/99 of Historic and Cultural Heritage of Extremadura and the Act 16/1985 of Spanish Historic Heritage constitute the legal and regulatory framework applicable for the protection of the property.

The Special Protection Plan, as an urban planning tool, regulates the urban regime of the affected plots, apart from the building conditions and the conservation of the built heritage, including the archaeological heritage, which defines the historical evolution of urbanism since Roman times. The Special Protection Plan covers an area larger than the inscribed property, therefore placing special emphasis on the protection of the unique ensemble.

Law 2/99, as a sectorial regulation in terms of culture, specifies, defines and regulates those aspects related to heritage conservation, material or not, aimed at their transmission to future generations.

The implementation of the Special Revitalization and Protection Plan of the Archaeological Heritage of the City of Cáceres will require systematic monitoring and review to respond to different conditions. The plan will also need to be adapted to meet regulations at the national and international levels and to define a coherent and global project for the city, establishing guidelines and priorities with the objective of a physical and functional rehabilitation of the historic city.

In addition, the Management Plan will need to define a buffer zone and protection mechanisms to ensure the conservation of the setting of the property. This plan will also include a Traffic, Mobility and Accessibility Plan, as well as a Steering Plan of Interventions in Public Spaces.

The creation of a Consortium of the Monumental City, comprised of the City Council of Cáceres, the Regional Government of Extremadura and the Central Government of Spain, will also be crucial. The Consortium will function as a financial and technical body with a specialized administration focused on necessary coordination and cooperation among those entities.