Tsingy de Bemaraha Strict Nature Reserve comprises karstic landscapes and limestone uplands cut into impressive 'tsingy' peaks and a 'forest' of limestone needles, the spectacular canyon of the Manambolo river, rolling hills and high peaks. The undisturbed forests, lakes and mangrove swamps are the habitat for rare and endangered lemurs and birds. 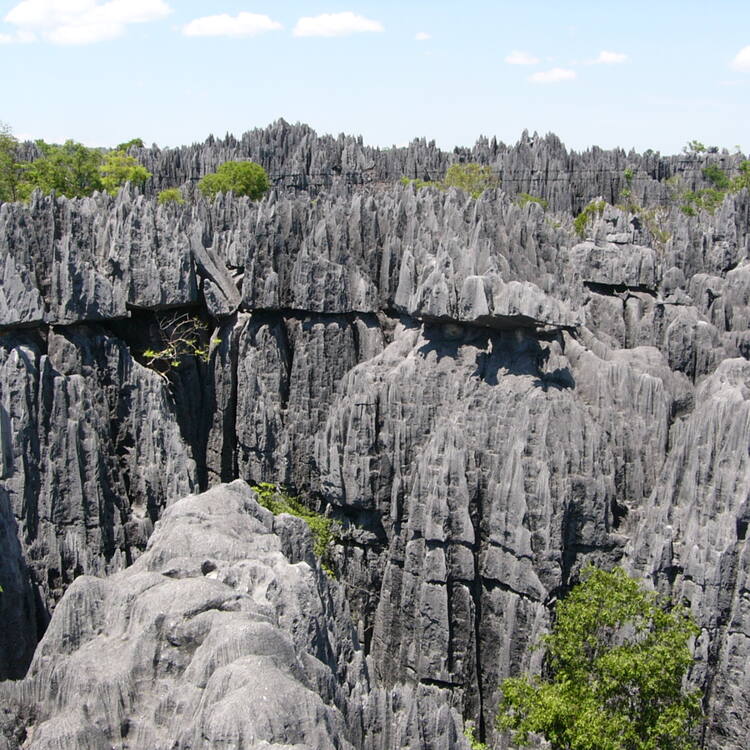 The Tsingy de Bemaraha Integral Nature Reserve is located in the District of Antsalova and in the region of the central west part of Madagascar. It is part of the Melaky region, in the autonomous province of Mahajanga, and localized between 44°34’ to 44°57’ longitude east and 18°12’ to 19°09’ latitude south. Its total area is 152,000 ha.

The Reserve offers a wide variety of geomorphological structures. It is a veritable cathedral of limestone and offers one of the most spectacular natural landscapes of the Grand Island and even of the world. The western part of the plateau presents a very dissected or ‘lapiezée’ relief, most of which is covered by a dense, dry and deciduous forest. In its eastern part, the forest is interspersed by savannas.

The Tsingy of Bemaraha is considered a centre for endemism by its wealth in faunal and floral species.

Criterion (vii): The Tsingy de Bemaraha Integral Nature Reserve represents rare or eminently remarkable geological phenomena and of exceptional beauty. It presents impressive geological elements including karstic scenery with a highly dissected limestone massif, crossed by a deep river gorge  which is the spectacular expression of a stage of evolution of the earth in the form of a « forest of sharp stones » with high limestone pinnacles rising up to 100 metres, forming veritable cathedrals, offering a grandiose, spectacular natural landscape. Further, « the Tsingy » of the limestone plateau forms an unusual feature of outstanding beauty, unique in the world, universally recognized by the effect created by the shades of forest green on metallic reflections of the grey karst “bristles”.

Criterion (x): The Tsingy de Bemaraha Integral Nature Reserve contains communities of rare and/or threatened animal species. In addition to a forestry cover of more than 85,000 ha and excellent examples of principal types of ecosystem from rainforest habitats to very dry ones, the property contains a very rich biological diversity on a world level, due to its faunal and floral species, their rarity and containment presenting spectacular adaption and insular characteristics, enabling the conservation in situ of endemism and biological diversity. The same applies to the habitats of very rare species all threatened with extinction, which are either endemic or subordinate: 11 species of Lemur; 6 bird species; 2 local endemic amphibian species; 17 endemic reptile species including the famous miniscule chameleon, Brookesia perarmata; as well as a species of rodent, Nesomys lambertoni, that only exists in the Reserve. Linked to the diversity of habitats, systematic research will without doubt shortly enable the addition of new species to this list. Furthermore, certain surrounding lakes, also dependent on the hydrological system of the property, have been listed as Ramsar sites.

Since its national listing in 1927, the protection of the Reserve is partially assured due to the very difficult access formed by the karst barriers and vegetation formations still intact. Currently, the dense, dry forest covers an area of 80,000 ha, that is a little more than half of the Reserve. It still constitutes a suitable habitat for the conservation of animal and plant species. Another part of the property is composed of karst system (limestone), forming an exceptional landscape. The savanicole formation occupies nearly all the other half of the Reserve (47.6%). This entire zone, that contains botanical characteristic elements of the landscape, provides favourable natural conditions for livestock breeding. Consequently, each year, anthropogenic fires cover some areas of the savanna and affect a part of the borders and the forests. Human and cattle disruption to the integrity must be part of the elements to monitor in the Reserve.

The Reserve has the status of « Integral Natural Reserve » representing the strongest protection at the national level, since 1927. Until 1990, apart from the presence of a Chief of the Reserve, staff from the Ministry of Water and Forests assures the protection in situ, the property has not had any organized management structure. However, the Government, UNESCO and WWF were willing to allocate funds to improve management and conservation. To this end, a document which is at the same time a strategic management plan for the Reserve, was prepared to constitute an overall planning reference. Presently, the Reserve has a management and conservation plan, including bush fire control, and the implementation of this plan was already undertaken during this decade.

Since 1991, an institution mandated by the Malagasy State assures the management and conservation of this site, the « National Association for the Management of Protected Areas », that has become the « Madagascar National Parks ». Moreover, a change in the status from the Integral Nature Reserve to National Park is envisaged to redefine physically and legally the boundaries as well as the eventual promotion of ecotourism, in permanent consultation with the neighbouring communities and the State.

In the border areas of the property, the management of wild fires in grazing lands with the communities remains one of the major management concerns especially in the northern part. At the same time, developing tourism impacts shall be monitored to use as a socio-economic integration tool which does not negatively affect the integrity of the property in the mid- or long-term, whist being a stimulant for local development. The financial income resulting from the development of ecotourism is beginning to have its positive impacts on conservation activities. 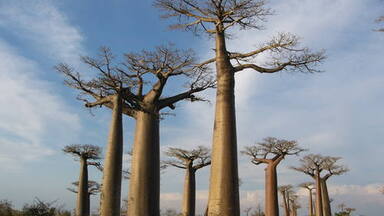 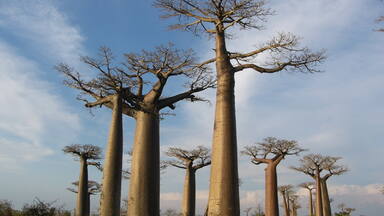 In memoriam: Guy Suzon Ramangason
7 May 2020