The walled city of Jaipur, in India’s north-western state of Rajasthan was founded in 1727 by Sawai Jai Singh II. Unlike other cities in the region located in hilly terrain, Jaipur was established on the plain and built according to a grid plan interpreted in the light of Vedic architecture. The streets feature continuous colonnaded businesses that intersect in the centre, creating large public squares called chaupars. Markets, shops, residences and temples built along the main streets have uniform facades. The city's urban planning shows an exchange of ideas from ancient Hindu and early modern Mughal as well as Western cultures. The grid plan is a model that prevails in the West, while the organization of the different city sectors (chowkris) refers to traditional Hindu concepts. Designed to be a commercial capital, the city has maintained its local commercial, artisanal and cooperative traditions to this day. 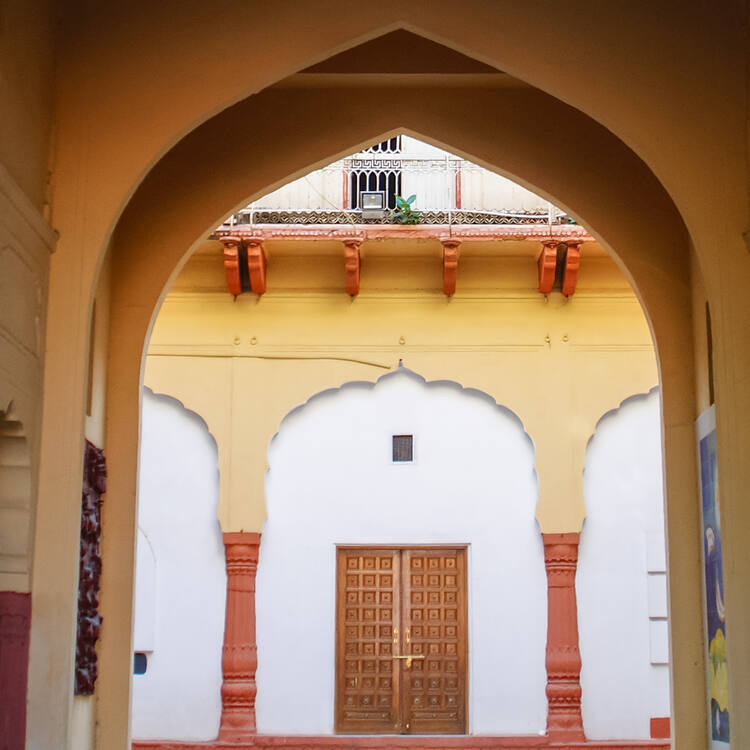 The City of Jaipur is an exceptional example of indigenous city planning and construction in South Asia. In a remarkable difference from the existing medieval practices where settlements developed in a more organic manner (that grew over a longer period of time, in layers, in response to local geography, topography, climate and socio-cultural systems including caste system and occupation), Jaipur was conceived and developed in a single phase in the 18th century CE with a grid-iron model inspired from the Prastara plan of the Vastu Shastra, a treatise of traditional Hindu architecture. This town plan later became a trendsetter for many 19th century CE towns in Rajasthan State and India. Built under the patronage of Sawai Raja Jai Singh II (ruled 1700 – 1743 CE), a project approach was taken towards the city construction where most of the city infrastructure, public and royal spaces were completed within a span of four years, from 1727 – 1731 CE along with special royal invitations to several traders inviting them to settle in this newly envisaged trade and commerce city.

Unlike other medieval cities of the region, Jaipur was deliberately planned as a new city located on the plains and open for trade, as opposed to cities on hilly terrain and military cities of the past, though its planning still responded to the surrounding hill tops in all topography. The site selected within the valley that lay to the south of the Amber hills was comparatively flat and undeveloped. It was also adequately protected, nestled within hills having an array of forts and defence posts. Thus, the new city could be planned as an inviting trade and commerce city with an ambitious vision of the ruler Sawai Jai Singh II and his architect- planner Vidyadhar.

The design of the new city was a breath-taking departure from the prevalent practices in city development in the sub-continent. Its urban morphology reflected the coming together of cultural elements from eastern and western planning, expressing a culture of a ‘trade and commerce city’ and townscape that is unparalleled anywhere in South Asia. Envisaged as a trade capital, the main avenues of the city were designed as markets, which still remain as characteristic bazaars of the city. Chaupar, or designed large public squares at the intersection of roads, is another feature that is distinct to Jaipur as are its single and multicourt havelis and haveli temples. Besides an exemplary planning, its iconic monuments such as the Govind Dev temple, City Palace, Jantar Mantar and Hawa Mahal excel in artistic and architectural craftsmanship of the period.

Jaipur is an expression of the astronomical skills, living traditions, unique urban form and exemplary innovative city planning of an 18th century city from India.

Criterion (ii): Jaipur is an exemplary development in town planning and architecture that demonstrates an amalgamation and important interchange of several ideas over the late medieval period. It shows an interchange of ancient Hindu, Mughal and contemporary Western ideas that resulted in the customised layout of the city. It is believed that Raja Jai Singh arrived at the final layout after a thorough analysis of several town plans sourced from across the globe. Following the grid-iron plan prevalent in the west but with traditional zoning, superimposed by the desire to rival Mughal cities, Jaipur reflected new concepts for a thriving trade and commerce hub that became a model for the later towns in the adjoining Shekhawati region and others parts of Western India.

Criterion (iv): Jaipur represents a dramatic departure from extant medieval cities with its ordered, grid-like structure – broad streets, crisscrossing at right angles, earmarked sites for buildings, palaces, havelis, temples and gardens, neighbourhoods designated for particular castes and occupations. The main markets, shops, havelis and temples on the main streets were constructed by the state, thus ensuring that a uniform street facade was maintained in Jaipur. The city planning of Jaipur remains a unique response to the terrain that amalgamates ideas from an ancient Indian treatise to contemporary global town plans and Imperial Mughal architecture to finally produce a monumental urban form, unparalleled in its scale and magnificence for its times. While the grid iron pattern of planning has been used historically in city planning, its application at such a monumental scale for a planned trade city, along with its particular urban form, makes it an important example in the history of urban planning of the Indian subcontinent. The continuity of the architecture and urban form is enhanced by the functions of trade and craftsmanship that reflect the living heritage character of this innovative urban settlement.

Criterion (vi): Historically, the city is said to have housed “chattis karkhanas” (36 industries), the majority of which included crafts like gemstones, lac jewellery, stone idols, miniature paintings, each with a specified street and market some of which continue to exist. During 19th century, the local crafts received further momentum with British period influences in special exhibitions held in United Kingdom, establishment of institutions such as the Rajasthan School of Arts and Albert Hall Museum. While the local traditions of guilds continued, formal institutions for crafts, policies and programmes by Government and the private sector further contributed to national and international recognition of Jaipur crafts in the 20th and 21st centuries. There are 11 surviving crafts, and continuing building crafts of Jaipur contribute much to the conservation works of the city, and the renowned craftsmen from Jaipur continue to conserve and restore historic structures across many cities in India.

The inscribed area of the historic walled city of Jaipur within the walls and gates includes all of the attributes of the property (18th century town plan with its grid iron plan, chaupars, chowkris, city wall and nine city gates; urban form with 11 bazaar facades, shop typology along bazaars, havelis and haveli temples along bazaars and at chaupars, iconic monuments, gates leading to inner streets; craft streets and bazaar areas). The inner areas of chowkris and the related old havelis are not attributes of the property.

The city gates and associated sections of walls, all major monuments and bazars remain in generally good condition despite increasing development pressures. Aspects such as underground Metro lines have been incorporated on the East West axis with due consideration that the architectural icons and urban character of the walled city area remain unchanged, although there has been the loss of mature trees in several chaupars.

The boundaries of the property conform to the original 18th century plans of Sawai Jai Singh II and relate to the surrounding topography as well as the original vision for the planned city. The size and scale of all town planning elements such as width of roads, hierarchy of public spaces, open spaces, waterbodies, built form all are intact as per the original plan. The iconic built heritage structures retain their original form, character and architectural style. Though some areas of bazars and inside havelis in chowkris are undergoing major changes, but most are still intact form and location.

Issues include unauthorised new constructions and additions, some affecting parts of the city wall, new construction affecting the upper facades of some bazaars, communication towers, and the development of open spaces for carparks.

The detailed heritage inventory for all attributes should be completed for the property.

The buffer zone includes the natural terrain and surrounding peaks that governed the set out and alignment of the town plan. The surrounding peaks and skyline outside the property are protected from the visual impacts of development by urban controls.

The spatial organization of the historic walled city of Jaipur continues to reflect the 18th century grid-iron plan. The architectural components like the gates and city walls, bazaars, chaupars and chowkris, historic structures, havelis, religious buildings, and water structures reflect the urban ensemble of the walled city of Jaipur as conceived from the 18th to the early 20th centuries. The materials and substance are largely original, primarily lime and stone. The bazaars (market areas) have been recently conserved using traditional materials. In some cases, 20th century structures use cement concrete but recreate the original architectural vocabulary.

The use and function of most royal and public spaces and monuments are now adapted as contemporary public monuments. Shops, temples and private houses largely retain their original use.

The Municipalities Act of 2009 (amendment) and Jaipur Building Byelaws 1970 guide the architectural control on the urban character of Jaipur which has helped in retaining the original architectural form of the bazaars. As per the Jaipur Master Plan 2025, the walled city area is a specially designated heritage zone and any work related to heritage conservation is guided by detailed heritage management plans and project reports implemented through mandated government agencies. The development and implementation of a Special Area Heritage Plan will include conservation measures and enhance the state of conservation.

Architectural control guidelines and other measures are needed to improve legal protection, and otherwise to improve the coordination and effectiveness of protection for all attributes.

The extension and enhancement of the management system is needed, to cover all attributes and provide for a coordinated management supporting administrative tools and decision mechanisms. The management system shall include a detailed monitoring program and an overall interpretation and presentation policy and program.