The List Archaeological Border complex of Hedeby and ...
Print

The archaeological site of Hedeby consists of the remains of an emporium – or trading town – containing traces of roads, buildings, cemeteries and a harbour dating back to the 1st and early 2nd millennia CE. It is enclosed by part of the Danevirke, a line of fortification crossing the Schleswig isthmus, which separates the Jutland Peninsula from the rest of the European mainland. Because of its unique situation between the Frankish Empire in the South and the Danish Kingdom in the North, Hedeby became a trading hub between continental Europe and Scandinavia and between the North Sea and the Baltic Sea. Because of its rich and well preserved archaeological material, it has become a key site for the interpretation of economic, social and historical developments in Europe during the Viking age. 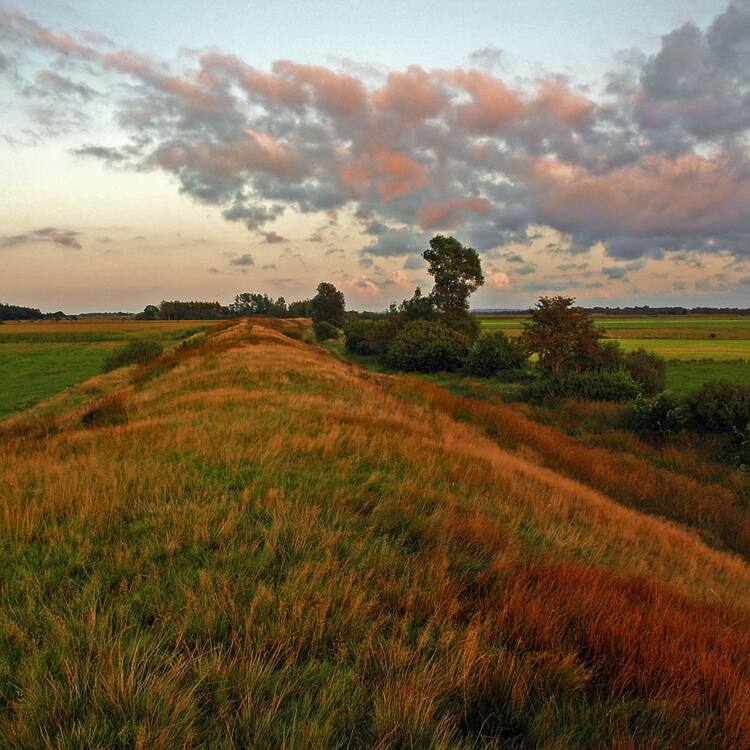 The Crooked Wall of the Danevirke © Archäologisches Landesamt Schleswig-Holstein

The trading centre of Hedeby and the defensive system of the Danevirke consist of a spatially linked complex of earthworks, walls and ditches, a settlement, cemeteries and a harbour located on the Schleswig Isthmus of the Jutland Peninsula during the 1st and early 2nd millennia CE. This singular geographic situation created a strategic link between Scandinavia, the European mainland, the North Sea and the Baltic Sea. A Baltic Sea inlet, rivers and extensive boggy lowlands constricted the north-south passage to the peninsula while, at the same time, providing the shortest and safest route between the seas across a narrow land bridge.

Because of its unique situation in the borderland between the Frankish Empire in the South and the Danish kingdom in the North, Hedeby became the essential trading hub between continental Europe and Scandinavia as well as between the North Sea and the Baltic Sea. For more than three centuries – throughout the entire Viking era – Hedeby was among the largest and most important among the emporia – the new trading towns that developed in Western and Northern Europe. In the 10th century, Hedeby became embedded in the defensive earthworks of the Danevirke which controlled the borderland and the portage.

The importance of the border and portage situation is showcased by large quantities of imports from distant places among the rich assemblages in Hedeby. The archaeological evidence, including large amounts of organic finds, provides an outstanding insight into the expansion of trading networks and cross-cultural exchange as well as into the development of northern European towns and the Scandinavian elites from the 8th to 11th centuries.

Attributes of the property include the archaeological remains of Hedeby including traces of roads, structures and cemeteries. In the harbour adjacent to the town are the archaeological deposits related to jetties that extended over the water and four known shipwrecks. Hedeby is surrounded by a semi-circular rampart and overlooked by a hill fort. Three runestones have been found nearby. Attributes related to the Danevirke include sections of the Crooked Wall, the Main Wall, the North Wall, the Connection Wall, the Kovirke, the offshore works, and the East Wall with either above ground vestiges or archaeological remains below the ground or underwater.

Criterion (iii): Hedeby in conjunction with the Danevirke were at the centre of the networks of mainly maritime trade and exchange between Western and Northern Europe as well as at the core of the borderland between the Danish kingdom and the Frankish empire over several centuries. They bear outstanding witness to exchange and trade between people of various cultural traditions in Europe in the 8th to 11th centuries. Because of their rich and extremely well preserved archaeological material they have become key scientific sites for the interpretation of a broad variety of economic, social and historic developments in Viking Age Europe.

Criterion (iv): Hedeby facilitated exchange between trading networks spanning the European continent, and – in conjunction with the Danevirke – controlled trading routes, the economy and the territory at the crossroads between the emerging Danish kingdom and the kingdoms and peoples of mainland Europe. The archaeological evidence highlights the significance of Hedeby and the Danevirke as an example of an urban trading centre connected with a large-scale defensive system in a borderland at the core of major trading routes over sea and land from the 8th to 11th centuries.

Hedeby and the Danevirke encompass archaeological sites and structures of the 6th to 12th centuries which represent a trading town and an associated defensive wall complex. The area includes all elements that represent the values of the property – the monuments and ramparts, locations of significance, and all the archaeological remains that embody the long history of the Hedeby-Danevirke complex. The components representing the Danevirke reflect the stages of construction and the evolution of the defensive works, as sections were reconstructed and new portions of walls were built. The buffer zone is a protective and managerial entity that preserves important viewsheds and ensures that the core elements of the area will be maintained for the future.

The conditions of authenticity of the property regarding the form, design, materials and substance of the monuments has been met. Hedeby has not been inhabited or otherwise built upon since it was abandoned, ensuring the authenticity of its archaeological deposits. Some 95% of the town remains unexcavated and the other 5% has been studied using established archaeological methods and analyses. The Danevirke has also been thoroughly documented and has only seen rebuilding at the 19th century bastions, the remains of which are clearly distinguishable from the older sections of the wall.

The property, its buffer zone and its wider setting are protected by the legal systems in place (e.g. listed monuments, nature protection areas, landscape protection areas). In addition, the majority of sites are owned by public bodies. The values of the sites are also considered and respected in public planning processes. The various protection and planning mechanisms and acts which apply directly to the landscape are sufficient to guarantee the protection and preservation of the Outstanding Universal Value of the property. Funding for the site management of the property is provided by the Federal State of Schleswig-Holstein and other public owners.

A site management plan was implemented in 2014. All the important stakeholders have committed to the aim of protecting, preserving, monitoring and promoting the Outstanding Universal Value of the property. The values, attributes, integrity and authenticity of the property are safeguarded and managed within the plan. In the long run, the core management issues are to increase awareness of the value of Hedeby and the Danevirke as an archaeological landscape and to retain that value by all important stakeholders participating in its management. The management plan aims at further integrating Hedeby and the Danevirke into their cultural, social, ecological and economic settings and to increase their social value to promote sustainable development in the region. Future threats to the landscape, such as wind turbines, land use, housing developments and visitor impact, as well as natural agents such as plants and animal activities, need to be tackled collaboratively. Some specific threats such as damage to Valdemar’s Wall due to exposure or damage require monitoring and mitigation at regular intervals.
News