Himeji-jo is the finest surviving example of early 17th-century Japanese castle architecture, comprising 83 buildings with highly developed systems of defence and ingenious protection devices dating from the beginning of the Shogun period. It is a masterpiece of construction in wood, combining function with aesthetic appeal, both in its elegant appearance unified by the white plastered earthen walls and in the subtlety of the relationships between the building masses and the multiple roof layers. 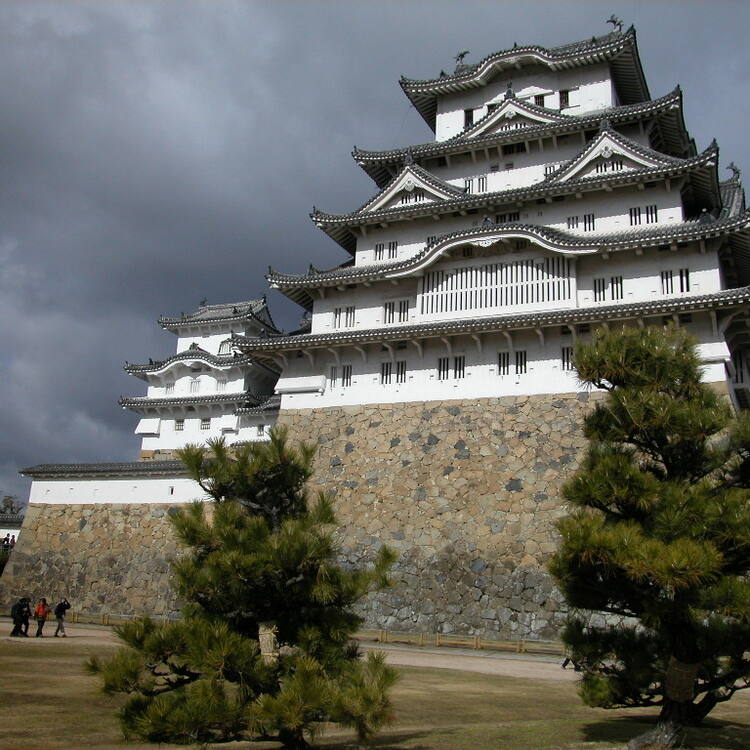 Himeji-jo is the finest surviving example of early 17th-century Japanese castle architecture. It is located in Himeji City, in the Hyogo Prefecture, an area that has been an important transportation hub in West Japan since ancient times. The castle property, situated on a hill summit in the central part of the Harima Plain, covers 107 hectares and comprises eighty-two buildings. It is centred on the Tenshu-gun, a complex made up of the donjon, keeps and connecting structures that are part of a highly developed system of defence and ingenious protection devices dating from the beginning of the Shogun period. The castle functioned continuously as the centre of a feudal domain for almost three centuries, until 1868 when the Shogun fell and a new national government was created.

The principal complex of these structures is a masterpiece of construction in wood, combining function with aesthetic appeal, both in its elegant appearance unified by the white plastered earthen walls – that has earned it the name Shirasagi-jo (White Heron Castle) – and in the subtlety of the relationships between the building masses and the multiple roof layers visible from almost any point in the city.

Criterion (i): Himeji-jo is a masterpiece of construction in wood. It combines its effective functional role with great aesthetic appeal, both in the use of white-painted plaster and in the subtlety of the relationships between the building masses and the multiple roof layers.

Criterion (iv): It represents the culmination of Japanese castle architecture in wood, and preserves all its significant features intact.

The property, a single entity zone of 107 ha, is almost coincident with the overall castle grounds, which are divided into the inner walled zone and the outer walled zone. The property boundaries follow the moats around the outer walled zone, except in the southeast. In the property zone, the eighty-two buildings that include the donjon complex, ramparts, gates, and stone walls have fully retained their original composition and condition dating back to the early 17th century, although some of the buildings of Himeji-jo were lost in the process of historical change.

The feudal masters of the castle kept it in good order with regular repair campaigns in the 17th, 18th, and 19th centuries. There has been some loss of buildings over time. After the national government took over the site, part of the west bailey and samurai houses were replaced by military buildings. These buildings were removed in 1945 and replaced by public buildings. In 1882, fire destroyed the castle lord’s residential compounds. However, these losses can be considered minor one, and total integrity has been kept.

Thus, Himeji-jo perfectly preserves the interior and exterior characteristics of a 17th century Japanese castle, and integrity is ensured in the contexts of both wholeness and intactness.

A series of conservation projects since 1934 have been carried out using techniques developed in Japan for conservation of wooden structures and in conformity with established principles of authenticity in terms of form/design, materials/substance, traditions/techniques and location/setting. The use of new materials is rigorously controlled, and all important proposals should be discussed and approved by the council. Buildings added to the site in the 19th or 20th centuries have been removed.

The only modern intrusion has been the insertion of the reinforced concrete foundation raft, which was justified on the grounds that the process of deformation of the structures due to the weakness of the subsoil would inevitably lead to catastrophic collapse in a region of high seismic activity. Incompatible interventions, such as doors and windows, that occurred in earlier work, have been replaced with appropriate elements when enough information was available on the form and substance of the originals.

Since the beginning of the Japanese Modern period in 1868, the national government has protected the property in close cooperation with local governments.

Its eighty-two buildings and the site area of 107 ha are protected as National Treasures, Important Cultural Properties and a Special Historic Site under the 1950 Law for the Protection of Cultural Properties. Under the law, proposed alterations to the existing state of the property are restricted, and any alteration must be approved by the national government.

Development pressure in the 143 hectare buffer zone is controlled by the 1987 Himeji City Urban Design Ordinance, the regulatory power of which was reinforced in 2008 under the 2004 Landscape Law. According to the 2004 Landscape Law, Himeji City also amended the 1988 Urban Design Master Plan and newly developed the Landscape Control Guideline in 2007. Himeji City must be notified of any proposed projects along streets with scenic views of Himeji-jo, and any proposed large-scale projects in the surroundings of Himeji-jo, in order to confirm that the proposed structures will fit in with the character of the historic environment.

All the buildings and most of the site area are owned by the national government. Ownership of the remaining area is divided among Hyogo Prefecture, Himeji City, and private companies. Under the 1950 Law, Himeji City is appointed as the official custodial body for managing the legally protected Himeji-jo site and buildings. The city carries out its responsibilities through the Management Office for the Himeji-jo Area, and according to the 1964 City Ordinance for the Management of Himeji-jo, the 1986 Management Plan for the Himeji-jo Historic Site (final revision in 2008), and guidance by the national government. The efforts cover activities including daily maintenance, cleaning, regular inspection, traffic restriction, disaster prevention, and site arrangement and interpretation.

As fire and earthquakes are the greatest risk to the property, the buildings are equipped with automatic fire alarms, security cameras, fire hydrants, and lightning arresters. All information from these facilities is monitored by the Himeji-jo Disaster Control Centre. With regard to earthquakes, Himeji City established an expert committee in 2006 to study, analyze, develop, and implement a necessary seismic strengthening scheme for the main donjon of Himeji-jo.