The List Kutná Hora: Historical Town Centre with the ...
Print

Kutná Hora: Historical Town Centre with the Church of St Barbara and the Cathedral of Our Lady at Sedlec

Kutná Hora: Historical Town Centre with the Church of St Barbara and the Cathedral of Our Lady at Sedlec

Kutná Hora developed as a result of the exploitation of the silver mines. In the 14th century it became a royal city endowed with monuments that symbolized its prosperity. The Church of St Barbara, a jewel of the late Gothic period, and the Cathedral of Our Lady at Sedlec, which was restored in line with the Baroque taste of the early 18th century, were to influence the architecture of central Europe. These masterpieces today form part of a well-preserved medieval urban fabric with some particularly fine private dwellings. 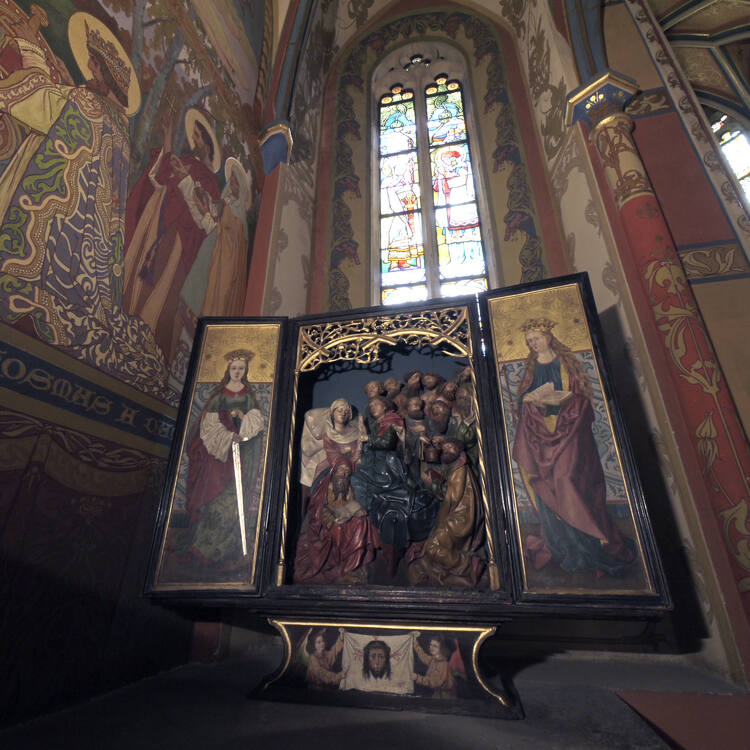 Kutná Hora: Historical Town Centre with the Church of St Barbara and the Cathedral of Our Lady at Sedlec © OUR PLACE The World Heritage Collection

The historic town centre of Kutná Hora with the Church of St Barbara and the Church of Our Lady at Sedlec are located in Central Bohemian Region of the Czech Republic. Kutná Hora has developed as a result of the discovery and exploitation of the rich veins of silver ore since the end of the 13th century. In the 14th century, it became a royal city endowed with buildings that symbolized its enormous prosperity. The Church of St Barbara and the former Cistercian monastery church of Our Lady and St. John the Baptist in Sedlec, located at a distance of approximately 1.5 km to the north-east of the historic centre, were to influence considerably the architecture of Central Europe. Today, these masterpieces, representing cathedral architecture, form the dominants of a well-preserved medieval town-planning structure filled with Gothic and Baroque urban fabric.

The most striking of Kutná Hora is the church of Saint Barbara, the Gothic jewel whose interior is decorated with frescoes depicting the secular life of the medieval mining town of Kutná Hora. This piece of art had a major influence on the architecture of central Europe. The former Cistercian cathedral, Our Lady of Sedlec, which is at a distance of 1.5 km northeast of the historic centre, was restored in the Baroque style in the early 18th century by Jan Blazej Santini. For the first time, he used his conception of the Baroque Gothic style which strongly influenced the history of architecture.

The oldest neighbourhoods Vlassky dvur (Italian courtyard which includes the southeast tower) are dating back to the early 14th century. The royal chapel is Gothic and boasts a remarkable interior design. Attached to the Italian court, we find the church of St Jacob from the 14th century whose furniture date back mostly to the end of the Gothic period. The Hradek (little castle) is an interesting example of Gothic palazzetto of Central Europe which has kept both inside and outside in its original condition.

Throughout its extensive area, the historic centre of Kutná Hora reflects a very specific medieval structure of the city ground plan, which is determined by mining, later with only isolated partial corrections. In spite of its long dynamic development, the town retains an earlier pattern of communications predating the city's actual origin. Moreover, the historic built-up area, formed by the finest architectural works from Gothic and Baroque periods and the specific breathtaking Kutná Hora panorama, is impressively linked to a picturesque surrounding landscape.

Criterion (ii): The urban fabric of Kutná Hora was endowed with many buildings of high architectural and artistic quality, notably the Church St Barbara, which had a profound influence on subsequent developments in the architecture of Central Europe.

Criterion (iv): The historic town centre of Kutná Hora, with the Church of St Barbara and the Church of Our Lady at Sedlec, constitutes an outstanding example of a medieval town whose wealth and prosperity was based on its silver mines.

All key elements defining the Outstanding Universal Value of the property are situated within the inscribed area. The property is also protected by a buffer zone that is clearly defined and adequate. Since the inscription of the property on the World Heritage List, no significant changes have been made within its perimeter, and there are no planned modifications for the future. So far, minor changes that have been carried out on the housing stock had neither a significant influence on its character, nor any significant impact on the urban fabric and the overall layout of the town. Nevertheless, increasing pressure to develop the attics of the houses or to add floors might have a negative impact on the visual integrity of the roofscape of the town, which is very well preserved. However, these risks are kept under control by the state heritage preservation authority. There will obviously be, in the future, partial building arrangements without significant impact on the overall character and urban structure of the town.

The property is of high authenticity; it is a proof that the original ground plan organism developed as a result of the exploitation of the silver mines. Very few of the old fortifications have survived; as regards the rest of the historic town centre, the richness of private homes is of major interest. Most of the urban fabric is intact and preserves the evidence of its organic development. Individual buildings survive with a remarkable authenticity degree of design and materials. The facades of a number of houses feature numerous Gothic elements, while others reflect an inclination to the Baroque and to the 18th century. Nevertheless, the structures of these houses are, on the whole, medieval as confirmed by a detailed scientific study that uncovered cellars with barrel vaults and lower floors in Gothic style. The authenticity of the ensemble, of the town layout and the architectural Kutná Hora features are attested by the systematic surveys that have been carried out since the end of the Second World War. The future of this level of authenticity is assured by the provisions of legislation which have strict standards designed to ensure the respect for authenticity.

Conservation works are being carried out in accordance with strict internationally recognized conservation criteria and with consistent use of historical materials and technological procedures.

Under the law mentioned above, the Church of St Barbarba is classified as a national cultural monument and as such it has the highest level of heritage protection at the expense of the state. The Italian Court (the former royal palace with the Mint) has the same level of protection. The Cathedral of Our Lady at Sedlec is, under the law mentioned above, classified as a cultural monument, as well as most other historic buildings in the historic centre of Kutná Hora.

The responsibility for the property management is shared between the Roman Catholic Church and the City of Kutná Hora, which are responsible for the maintenance, conservation and presentation of the property. Any actions that might affect it must be authorized by the appropriate state or local authorities.

The rehabilitation of the property is carried out with the support of public funding; for example the city has a good quality Programme for the Regeneration of Urban Heritage Reservations and Zones.

The Management Plan of the property, which is coordinated by the Municipality of Kutná Hora, is in place and is scheduled to be updated regularly. Due to the extent of the property and the complicated structure of ownership inside the property, maintenance and conservation works is subject to individual programmes that are coherent with the Programme for the Regeneration of Urban Heritage Reservations and Zones.

Financial instruments for the conservation of the property mainly include grant schemes and funding through the programme of the Ministry of Culture of the Czech Republic allocated to the maintenance and conservation of the immovable cultural heritage and of areas under heritage preservation, as well as financial resources allocated from other public budgets.