The List Incense Route - Desert Cities in the Negev
Print

The four Nabatean towns of Haluza, Mamshit, Avdat and Shivta, along with associated fortresses and agricultural landscapes in the Negev Desert, are spread along routes linking them to the Mediterranean end of the incense and spice route. Together they reflect the hugely profitable trade in frankincense and myrrh from south Arabia to the Mediterranean, which flourished from the 3rd century BC until the 2nd century AD. With the vestiges of their sophisticated irrigation systems, urban constructions, forts and caravanserai, they bear witness to the way in which the harsh desert was settled for trade and agriculture. 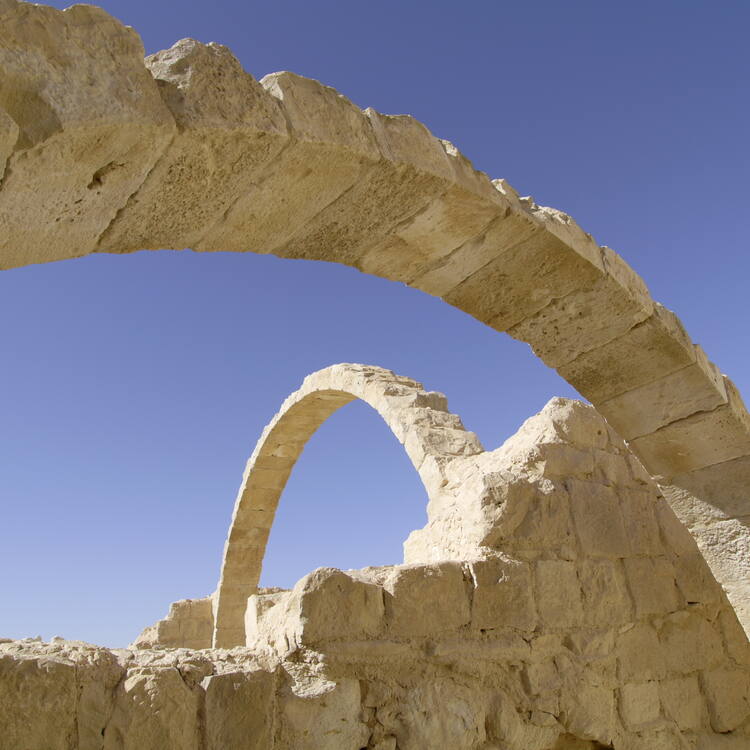 The Incense Route was a network of trade routes extending over two thousand kilometres to facilitate the transport of frankincense and myrrh from the Yemen and Oman in the Arabian Peninsula to the Mediterranean.

The four Nabatean towns of Haluza, Mamshit, Avdat and Shivta, with their associated fortresses and agricultural landscapes linking them to the Mediterranean are situated on a segment of this route, in the Negev Desert, in southern Israel. They stretch across a hundred-kilometre section of the desert, from Moa on the Jordanian border in the east to Haluza in the northwest. Together they reflect the hugely profitable trade in Frankincense from south Arabia to the Mediterranean, which flourished from the third century BCE until the second century CE, and the way the harsh desert was colonised for agriculture through the use of highly sophisticated irrigation systems.

Ten of the sites (four towns - Haluza, Mamshit, Avdat and Shivta; four fortresses - Kazra, Nekarot, Makhmal, and Grafon; and the two caravanserai of Moa and Saharonim) lie along, or near to, the main trade route from Petra, capital of the Nabatean Empire in Jordan, to the Mediterranean ports. The town of Mamshit straddles the northern parallel route. Combined, the route, and the desert cities along it, reflect the prosperity of the Nabatean incense trade over a seven hundred year period, from the 3rd century BCE to the 4nd century CE.

The towns were supported by extremely sophisticated systems of water collection and irrigation that allowed large-scale agriculture. These included dams, channelling, cisterns and reservoirs. Evidence of all these features is widespread around Avdat and central Negev, as are the remains of ancient field systems strung along riverbeds and hill slopes.

The property displays an all-embracing picture of Nabatean town planning and building technology over five centuries. The combination of towns, and their associated agricultural and pastoral landscapes, present a complete fossilized cultural environment.

The remains of the Nabatean desert settlements and agricultural landscapes presents a testimony to the economic power of frankincense in fostering a long desert supply- route from Arabia to the Mediterranean in Hellenistic-Roman times, which promoted the development of towns, forts and caravanserais to control and manage that route. They  also display an extensive picture of Nabatean technology over five centuries in town planning and building and bear witness to the innovation and labour necessary to create an extensive and sustainable agricultural system in harsh desert conditions, reflected particularly in the sophisticated water conservation constructions.

Criterion (iii): The Nabatean towns and their trade routes bear eloquent testimony to the economic, social and cultural importance of frankincense to the Hellenistic-Roman world. The routes also provided a means of passage not only for frankincense and other trade goods but also for people and ideas.

Criterion (v): The almost fossilized remains of towns, forts, caravanserais and sophisticated agricultural systems strung out along the Incense Route in the Negev desert, display an outstanding response to a hostile desert environment and one that flourished for five centuries.

The towns and forts combined with their trade routes and their agricultural hinterland, in all they provide a very complete picture of the Nabatean desert civilisation strung along a trade route. Remains of all the elements that comprised the settlements - towns, forts, caravanserais, and agricultural landscapes are within the boundaries. The limited development of the region has given the sites considerable protection from development. None of the attributes are under threat.

The remains of the towns, fortresses and caravanserais and landscapes mostly express well the outstanding universal value of the property as reflecting and exemplifying the prosperity of the Nabatean incense trade.

It is acknowledged that the cities of Mamshit and Haluza have previously been subjected to earlier interventions that threatened their authenticity. As part of the current management action, the inappropriate reconstructions in Mamshit, which were based on a scenographic intention rather than a scientific approach, were removed in 2005. And, excavations at Haluza, partly left without sufficient post-excavation consolidation, were backfilled during 2005 - 2006.

All of the nominated property is State owned. It is protected by national legislation, with all the component parts either being within designated national parks or nature reserves.

All finance comes from the Israel Nature and Parks Authority budget, supported by site income, sales and government subsidy. The four towns each have specifically designated allocations. In low-income years, funds are spent only on maintenance and protection, with conservation subsequently taking place as external funding becomes available.

There is a need for a continuing comprehensive archaeological strategy for the whole property and also for each of the major towns to cover archaeological research, non-destructive recording and approaches to stabilization and repair.