Following his defeat of the Mughal emperor Humayun in 1541, Sher Shah Suri built a strong fortified complex at Rohtas, a strategic site in the north of what is now Pakistan. It was never taken by storm and has survived intact to the present day. The main fortifications consist of the massive walls, which extend for more than 4 km; they are lined with bastions and pierced by monumental gateways. Rohtas Fort, also called Qila Rohtas, is an exceptional example of early Muslim military architecture in Central and South Asia. 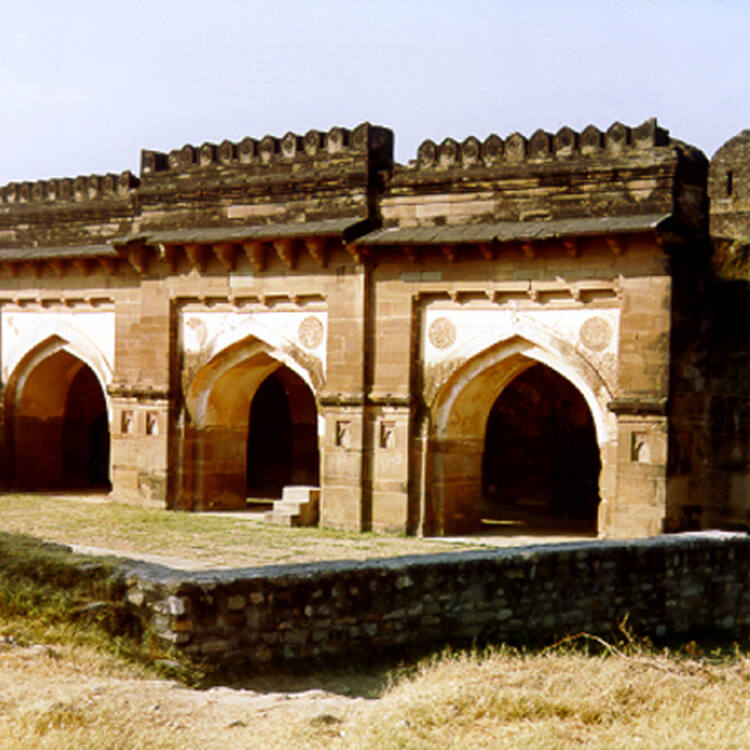 Rohtas Fort, built in the 16th century at a strategic site in the north of Pakistan, Province of Punjab, is an exceptional example of early Muslim military architecture in central and south Asia. The main fortifications of this 70-hectare garrison consist of massive masonry walls more than four kilometres in circumference, lined with 68 bastions and pierced at strategic points by 12 monumental gateways. A blend of architectural and artistic traditions from elsewhere in the Islamic world, the fort had a profound influence on the development of architectural style in the Mughal Empire.

Sher Sha Suri, founder of the Suri dynasty, commenced construction of Rohtas Fort (also called Qila Rohtas) in 1541. Irregular in plan, this early example of Muslim military architecture follows the contours of its hilltop site. An interior wall partitions the inner citadel from the remainder of the fort, and an internal water supply in the form of baolis (stepped wells) gave the fort’s garrison self-sufficiency in water. A beautiful mosque known as Shahi Masjid is situated near the Kabuli Gate, and the Haveli (Palatial House) Man Singh was constructed later in the Mughal period. Rohtas Fort represented a new form of fortification, based essentially on Turkish military architecture developed in reaction to the introduction of gunpowder and cannon, but transformed into a distinct style of its own.

Rohtas Fort blended architectural and artistic traditions from Turkey and the Indian subcontinent, thereby creating the model for Mughal architecture and its subsequent refinements and adaptations (including the European colonial architecture that made abundant use of that tradition). Most noteworthy are the sophistication and high artistic value of its decorative elements, notably its high- and low-relief carvings, its calligraphic inscriptions in marble and sandstone, its plaster decoration, and its glazed tiles.

The garrison complex was in continuous use until 1707, and then reoccupied under the Durrani and Sikh rulers of the 18th and 19th centuries respectively. A village grew within the walls, and exists day. Rohtas Fort is unique: there are no surviving examples on the subcontinent of military architecture of this period on the same scale and with the same degree of completeness and preservation.

Criterion (ii): Rohtas Fort blends architectural and artistic traditions from Turkey and the Indian subcontinent to create the model for Mughal architecture and its subsequent refinements and adaptations.

Criterion (iv): Rohtas Fort is an exceptional example of the Muslim military architecture of central and south Asia during the 16th century.

Within the boundaries of the property are located all the elements and components necessary to express the Outstanding Universal Value of the property, including its massive defensive walls, monumental gateways, irregularly spaced semi-circular bastions, and, within the enclosure, the cross wall that defines the inner citadel, the baolis (stepped wells), the Haveli Man Singh, and the Shahi Masjid mosque. The physical fabric of most of these elements and components is in a reasonable state of conservation. The fortification wall, however, has collapsed at some places, and the monument is threatened by encroachment, which has disturbed the original drainage system of the fort.

The main historic features of Rohtas Fort are authentic in form, setting, and materials. The limited restoration that has been carried out has been minimal and discreet, avoiding the use of inappropriate modern materials. The fortification wall is nevertheless vulnerable to rainwater flooding and choking the original drainage system.

Rohtas Fort is a protected antiquity in terms of the Antiquities Act, 1975, passed by the Parliament of the Islamic Republic of Pakistan. The Constitution (18th Amendment) Act 2010 (Act No. X of 2010), bestowed the Government of the Punjab with full administrative and financial authority over all heritage sites located in its province. The Directorate General of Archaeology and Museums, Government of Punjab, is responsible for the management and protection of Rohtas Fort. The land inside the fortification wall occupied by the modem village is also Government-owned, and is administered by the Directorate General of Archaeology and Museums. There is strict control over any form of building or alteration in and around the village (there is an internal buffer zone around the village). The buffer zone around the perimeter wall of the fort varies between 750 m and 1500 m in breadth and provides excellent protection for the setting and integrity of the monument. The Rohtas Fort Conservation Programme was initiated by the Archaeology and Museums department and the Himalayan Wildlife Foundation in 2000 to help protect the fort and develop it as a heritage site conforming to international standards of conservation and tourism. A steering committee created in 2003 oversees the conservation and development work.

Sustaining the Outstanding Universal Value of the property over time will require taking measures to enhance the management, conservation, and presentation of the property, particularly regarding the drainage system in the fort and encroachments. Completing, approving, and fully implementing the master conservation plan prepared under the Rohtas Fort Conservation Programme and establishing a regular monitoring regime, among other activities, would conform to international standards of conservation.