The houses in Telc, which stands on a hilltop, were originally built of wood. After a fire in the late 14th century, the town was rebuilt in stone, surrounded by walls and further strengthened by a network of artificial ponds. The town's Gothic castle was reconstructed in High Gothic style in the late 15th century. 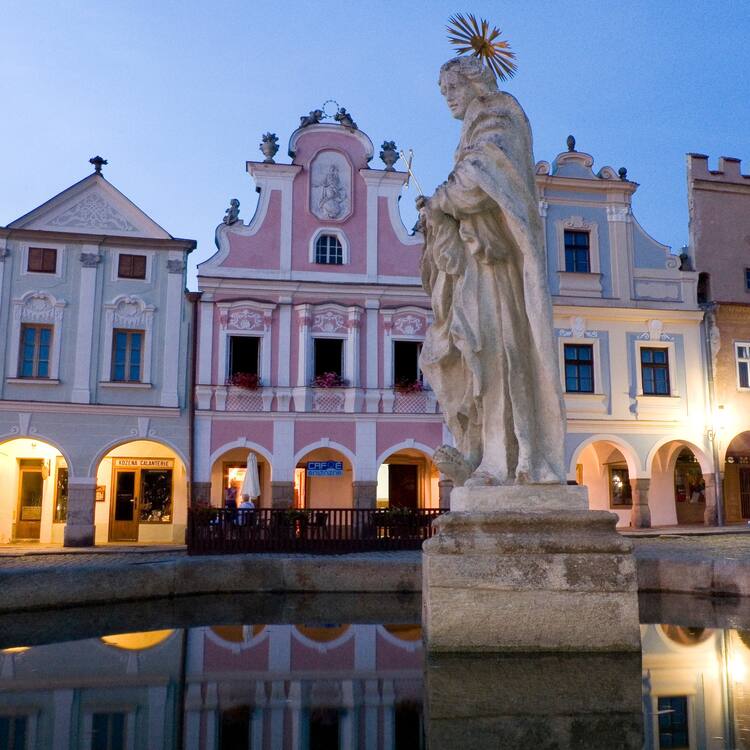 Historic Centre of Telč © OUR PLACE The World Heritage Collection

The town of Telč is located near the southwestern border between Moravia and Bohemia, in the Vysočina Region of the Czech Republic. It is situated in a region which was thickly forested until the 13th century. The property consists of the historic town centre, with the castle situated in the middle, and of two bodies of water, originally having a defensive function.

The origins of the settlement are unclear: there was an early medieval settlement at Staré Město to the south-east of the present town, but there is no mention of Telč in documentary records before 1333-1335, when reference is made to the existence there of an important castle (and presumably also a church and settlement). The town of Telč, whose area covers 36 ha, was probably founded in the mid 14th century. The town itself is of special importance since it was founded on purpose to gain political and economic control over an area where there were deep forests in the 13th and 14th centuries.

The outstanding nature of Telč, in terms of the quality and authenticity of its cultural elements, the tangible evidence of its origins and evolution represented by its original layout and architecture, and its picturesque setting is unquestionable. The Renaissance castle forms the centre of the city. It is a major component of the urban townscape and it retains obvious traces of its Gothic precursor. The castle represents a unique authentic complex with its original material substance and decorations. Its original interior is imbued with Italian art.

The Historic Centre of Telč features a triangular market square surrounded by Renaissance and Baroque burgher houses (but whose origins are medieval). These houses are linked by a continuous arcade. Their facades are characterized by a great diversity as regards the choice of decorative elements. In the middle of the market square, there is a fountain and a plague column. A little further, there is the town hall, the Church of the Holy Spirit, the Jesuit College and the Gothic St. James parish church. Finally, the evidence of the origins and historical development of the city is provided by the city walls built of stone whose functioning was enhanced by a system of fishponds, originally built for its strategic security.

Criterion (i): Telč is an architectural and artistic ensemble of outstanding quality. Its triangular market place possesses great beauty and harmony as well as great cultural importance surrounded as it is by intact and well preserved Renaissance buildings with a dazzling variety of facades.

Criterion (iv): The later Middle Ages in Central Europe saw the “plantation” of planned settlements in areas of virgin forest for reasons of political control and economic expansion. Telč is the best surviving example.

All the key elements necessary to convey the Outstanding Universal Value of the property are situated inside the inscribed area. Its delimitation and size are appropriate. The buffer zone of the Historic Centre of Telč is delimited too; its boundaries are identical to the boundaries of the protective zone of the urban heritage reservation. The urban fabric of the property and its buffer zone is dense, and its spatial organization is stabilised. No change is expected in the spatial development of the territory. So far, minor improvements of the buildings that have been carried out had no important negative impact either on their character or on the overall layout of the town. Nevertheless, the increasing development pressure on the roofscape might have a negative impact on the visual integrity of the town, which is very well preserved. However, these risks are kept under proper control by heritage preservation authorities and by the fact that the seat of the Regional Department of the National Heritage Institute is situated specifically in Telč.

The Historic Centre of Telč is of high authenticity because it escaped the mania for over-restoration of the 19th century. So, both the individual buildings and the townscape have been preserved; the same applies to the authenticity of materials and designs in their historical evolution. Restoration work is carried out in compliance with the international standards for heritage preservation and historical materials and techniques are used.

The property is protected by Act No. 20/1987 Coll. on State Heritage Preservation as amended and is designated as urban heritage reservation. The castle has been designated a national cultural heritage site, hence it enjoys the highest degree of legal protection with regard to heritage preservation. A number of other buildings situated within the boundaries of the property are designated cultural heritage sites. The buffer zone of the property is identical to the protective zone of the urban heritage reservation. In the long term, risks related to the development will have to be taken into account and building regulations will need to be strengthened. There is increased pressure for transforming attic spaces (loft) into living spaces. Therefore it is necessary to correct any loft, not to disturb the roofscape. Loft conversions are not permitted in the event that the truss structure is historically valuable and worthwhile to be preserved. In the case of authorized loft, a concerned authority has control over the number, size, location and shape of roof lights.

The property Management Plan is currently in the process of finalisation. The responsibility for the property management is shared by the National Heritage Institute, a state-funded institution which is responsible for maintenance, conservation, functioning and development of the Renaissance castle, and of the Municipality of Telč which is in charge of the maintenance, conservation, functioning and development of the remaining part of the property. Due to the extent of the property and its complicated ownership structure, maintenance and restoration of the various properties are subject to individual programmes that are coherent with the Programme for the Regeneration of Urban Heritage Reservations and Zones. Financial instruments for the conservation of the property mainly include grant schemes, funding through the programme of the Ministry of Culture of the Czech Republic allocated to the maintenance and conservation regeneration of the immovable cultural heritage and of areas under heritage preservation, as well as financial resources allocated from other public budgets.

The property is in good condition and is subject to regular maintenance. Since 2000, annual monitoring reports have been prepared at the national level to serve the World Heritage property manager, the Ministry of Culture, the National Heritage Institute and other agencies involved.