Gammelstad, at the head of the Gulf of Bothnia, is the best-preserved example of a 'church village', a unique kind of village formerly found throughout northern Scandinavia. The 424 wooden houses, huddled round the early 15th-century stone church, were used only on Sundays and at religious festivals to house worshippers from the surrounding countryside who could not return home the same day because of the distance and difficult travelling conditions. 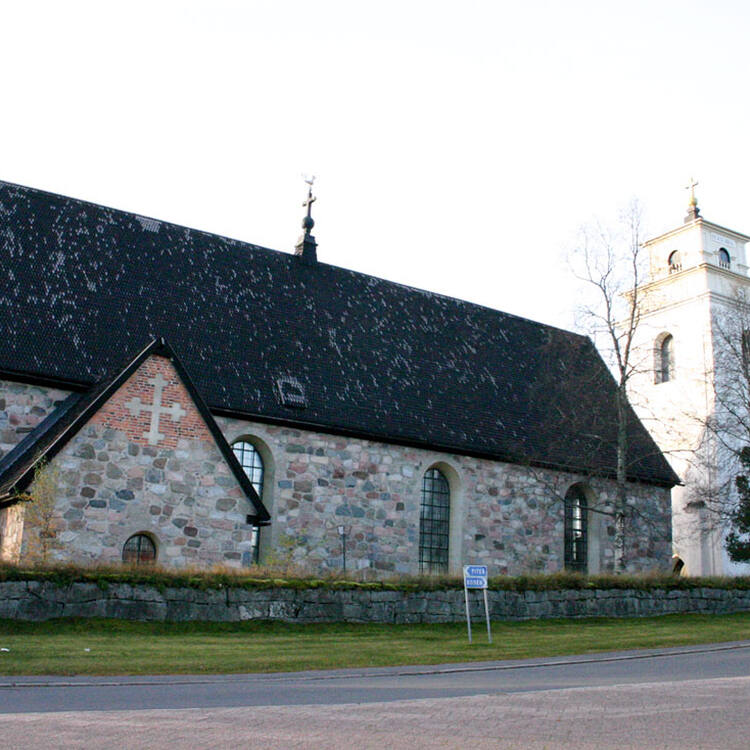 The remarkable Church Town of Gammelstad, Luleå, at the head of the Gulf of Bothnia in northern Sweden is the best-preserved example of a unique type of settlement once found throughout northern Scandinavia. The wooden houses of the church town, huddled around the late 15th-century stone church, were used only on Sundays and in conjunction with religious festivals as temporary overnight housing for worshippers from the surrounding countryside, whose journeys home involved travelling long distances under difficult climatic conditions in a harsh natural environment.

Beginning as trading settlements, church towns became the focus of religious observances among the widely scattered farming communities in this thinly populated region. The Church Town of Gammelstad, Luleå is an exceptionally well preserved example of this type of settlement, shaped by people’s religious and social needs rather than by economic and geographical forces. That Gammelstad developed into a church town rather than a mercantile town is a direct result of a progressive, natural land upheaval that had by the 17th century made the harbour unusable, thus forcing citizens to relocate the community’s commercial centre. The new settlement took the name of Luleå, also known as Nystan (New Town), the earlier church site being renamed Gammelstad (Old Town). The relocation of the commercial centre left Gammelstad untouched by the later 19th-century industrialization of the region.

The town plan of Gammelstad, which is preserved in its entirety, grew organically over several centuries, with radial approaches to the church and roads circling it along the sides of the hill. A gridiron plan was appended in the 17th century, and a wall with gates was built around the church (the wall now in place is a reconstruction). Development effectively halted after the middle of the 17th century. Today there are a total of 520 protected buildings within the World Heritage property, comprised of 404 church cottages divided into about 552 separate chambers, and 116 other buildings. Church cottages used as short-term housing for worshippers are juxtaposed against larger, more conventional houses for the officials and merchants who lived permanently in the settlement. Both types of housing are clustered around the late 15th-century church, the district’s only stone building, whose size testifies to the prosperity of the region. Other notable buildings are the Chapel of Bethel, the Cottage of the Separatists, the Parish House, the Tithe Barn, the Mayor’s Residence, the Captain’s Residence, and the Guest House. Gammelstad, which is still operating as a church town, is the oldest, most complete, and best preserved of this kind of settlement, a type that has now nearly disappeared.

Criterion (ii): The Church Town of Gammelstad, Luleå, admirably illustrates the adaptation of conventional urban design to the special geographical and climatic conditions of a hostile natural environment. The town plan, which grew up organically over several centuries, is preserved in its entirety.

Criterion (iv): Gammelstad is an outstanding example of the traditional “church town” of northern Scandinavia. It is the foremost representative of Scandinavia’s church towns, a type of town-like milieu that has been shaped by people’s religious and social needs rather than by economic and geographical forces. Gammelstad, which is still operating as a church town, is the oldest, most complete, and best preserved of these settlements.

Criterion (v): The Church Town of Gammelstad, Luleå, where the custom of staying close to the church throughout the weekend has created a way of life and style of building whose main features have been preserved unchanged for four hundred years, thus combining rural and urban life in a remarkable way, represents a type of Nordic settlement that has nearly disappeared.

The entire church town is included within the boundaries of the property, and all of the important buildings and other characteristics exhibiting its Outstanding Universal Value are preserved, including the church cottages, the church, the public and private houses, the radially laid out medieval roads, and the 17th-century gridiron plan. Its boundaries thus adequately ensure the complete representation of the features and processes that convey the property’s significance. The 16.402 ha property, which has a 243.474 ha buffer zone, does not suffer from the adverse effects of development and/or neglect.

The authenticity of the Church Town of Gammelstad, Luleå, is very high. The town plan, which developed organically over several centuries, is preserved in its entirety. The buildings are authentic in form, and measures are in place to ensure their authenticity. There is also a strong consciousness regarding authenticity in materials. This is reflected in the town planning regulations, which contain strict provisions relating to restoration and conservation works. The parish church, cottages, Chapel of Bethel, Cottage of the Separatists, Parish House, Tithe Barn, and road network all show a high level of authenticity, as do several of the private houses, including the Mayor’s Residence, Captain’s Residence, and Guest House. Other protected buildings – mainly the more modest ones – have witnessed minor negative changes to their authenticity, but without significant consequences for the property as a whole. A 48-m tall communication mast built within the buffer zone in 2006 has a negative impact on the setting, as is visible when approaching the property from the north. Identified threats and risks to the property include fire and a decrease in traditional use.

The majority of the buildings and land in the Church Town of Gammelstad, Luleå, are privately owned. The parish church and ancient remains, among other attributes, are protected under Historic Environment Act (1988:950).The cultural environment is also protected to a degree under the national Environmental Code as an Area of National Interest. A detailed local development plan developed in 1995 includes protection regulations for the buildings in the World Heritage property in accordance with the Planning and Building Act (1987). In addition, several other local ordinances and control documents regarding the Church Town of Gammelstad, Luleå have been adopted. Since 2000, a well-functioning information and cooperation forum – the Church Town Council – regularly assembles representatives drawn from authorities and management. A joint management plan, produced in a process that included parties with various interests in the World Heritage property, sets out how the attributes that sustain the Outstanding Universal Value of the property are to be protected, conserved, and managed, while at the same time allowing the property to be developed into an attractive visitor destination. The Municipality of Luleå is responsible for supervising the implementation of this plan. The Municipality Planning Office follows up and implements the planning ordinances that apply to the area, and drafts new plans when necessary.

The church cottages are inspected annually: the state of each church cottage is checked, and a report is sent to the owners. Knowledge about the Church Town of Gammelstad, Luleå, leads to understanding and boosts participation, which can increase a sense of responsibility. Activities for people of all ages and interests encourage church cottage owners to attend events and church services and stay overnight in their cottages, thereby passing this tradition on to new generations. The long-term challenge is to address moderate changes which in themselves do not constitute any threat individually but which collectively could threaten the authenticity of the property over time.