The Villa d'Este in Tivoli, with its palace and garden, is one of the most remarkable and comprehensive illustrations of Renaissance culture at its most refined. Its innovative design along with the architectural components in the garden (fountains, ornamental basins, etc.) make this a unique example of an Italian 16th-century garden. The Villa d'Este, one of the first giardini delle meraviglie , was an early model for the development of European gardens. 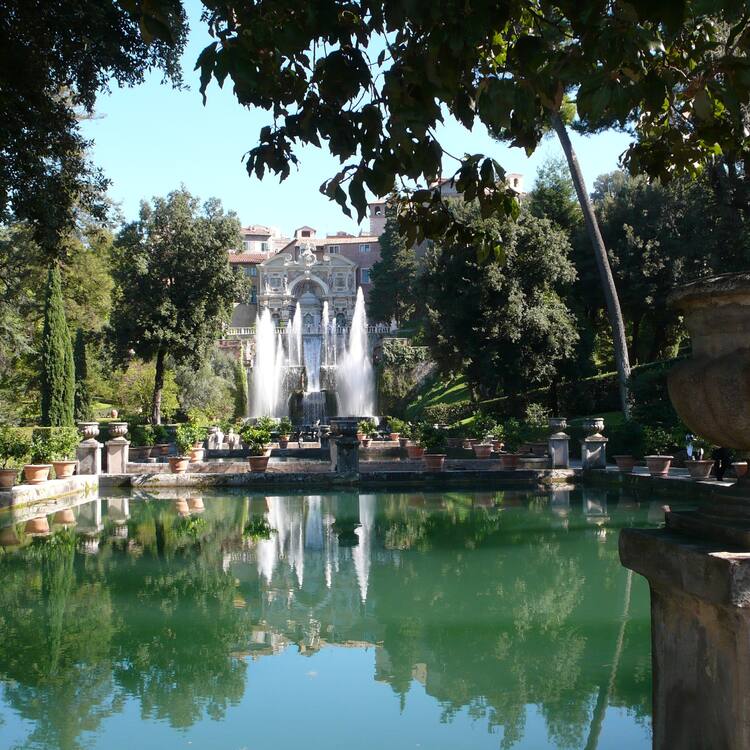 The palace and the gardens of Villa d’Este in Tivoli, in the centre of Italy, were laid out by Pirro Ligorio (1500-1583) on behalf of Cardinal Ippolito II d’Este of Ferrara (1509-1572), who, after being named governor of Tivoli in 1550, desired the realization of a palace adequate to his new status. The ensemble composed of the palace and gardens forms an uneven quadrilateral and covers an area of about 4.5 ha.

The Villa d’Este in Tivoli is one of the most remarkable and comprehensive illustrations of Renaissance culture at its most refined. Owing to its innovative design and the creativity and ingenuity of the architectural components in the gardens (fountains, ornamental basins, etc.), it is a true water garden and a unique example of an Italian 16th century garden. The Villa d’Este, one of the first giardini delle meraviglie, served as a model for and had a decisive influence on the development of gardens in Europe.

The plan of the villa is irregular because the architect was obliged to make use of certain parts of the previous monastic building. On the gardens’ side, the architecture of the palace is very simple: a long main body of three storeys, marked by bands, rows of windows, and side pavilions that barely jut out. This uniform facade is interrupted by an elegant loggia in the middle, with two levels and stair ramps. Starting in 1560 great efforts were made to supply the water needed for the numerous fountains that were intended to embellish the gardens. Once the water supply had been ensured and its flow made possible by the natural gravity created by the different levels of the garden, work started on constructing the fountains, ornamental basins, and grottoes and on laying out the landscape.

The Villa d’Este gardens stretch over two steep slopes, descending from the palace down to a flat terrace in the manner of an amphitheatre. The loggia of the palace marks the longitudinal and central axis of the gardens. Five main transversal axes become the central axis from the fixed point of view created by the villa, as each of these axes terminates in one of the gardens’ fountains. This arrangement of axes and modules was adopted to disguise the irregular outline of the gardens, to rectify by means of an optical illusion the relationship between the transversal and longitudinal dimensions, and to give the palace a central position, even though it is in fact out of alignment in relation to the whole.

The most striking effect is produced by the big cascade flowing out of a krater perched in the middle of the exedra. Jets of water were activated whenever unsuspecting people walked under the arcades. The Fontana del Bicchierone (Fountain of the Great Glass), built according to a design by Bernini (1660-61) was added to the decoration of the central longitudinal axis in the 17th century. This fountain is in the shape of a serrated chalice, from which a high jet of water falls into a conch shell. The gardens with the fountains, is a masterpiece of hydraulic engineering, both for the general layout of the plan and the complex system of distribution of water as well as for the many water plays with the introduction of the first hydraulic automatons ever built.

Criterion (i): The Villa d’Este is one of the most outstanding examples of Renaissance culture at its apogee.

Criterion (ii): The gardens of the Villa d’Este had a profound influence on the development of garden design throughout Europe.

Criterion (iii): The principles of Renaissance design and aesthetics are illustrated in an exceptional manner by the gardens of the Villa d’Este.

Criterion (iv): The gardens of the Villa d’Este are among the earliest and finest of the giardini delle meraviglie and symbolize the flowering of Renaissance culture.

Criterion (vi): The Villa d'Este, with its palace and gardens, bears exceptional testimony to the Italian Renaissance and has been a source of artistic inspiration ever since its creation.

The property includes all the fundamental elements that contribute to justify its exceptional universal value and is of adequate size to convey its significance. The interventions made over the centuries have preserved the integrity of the structure and the spatial relationship between the villa and the gardens themselves, as well as the ones between the architecture complex and the landscape. The link between the villa and the water – key element of the places using the peculiar shape of the Tiburtine territory – remains integral.

The degree of authenticity of both the palace and of the gardens is very high, and the different periods of the ensemble are clearly visible and recognizable. The remains of the Roman villa and the monastery on which the palace was built are still visible. Moreover, a large part of the spatial and ornamental structure of the gardens has been preserved. The restoration of the murals is methodical and rigorous. Other notable Baroque works, such as those by Bernini, have been well conserved and restored.

In the last years, the Villa d’Este has benefited of several restoration campaigns in conformity with the principles laid down in the Venice Charter, also because of micro-climatic conditions that have caused rapid deterioration in the decoration, of the finishing materials and in the fountains with their distribution system.

The Villa d’Este is protected as national monument under the Decreto Legislativo 42/2004, Codice dei beni culturali e del Paesaggio. It has been the property of the Italian government since 1920 and falls under the responsibility of the Ministry of Cultural Heritage and Activities and Tourism which takes care of the safeguarding, maintenance, restoration and preservation works.

A wide area around the Villa is protected as landscape by the same Decreto n.42/04: a safeguarding measure which is applied in areas declared by a law decree to be of interest for their landscape resources. Authorization for any form of intervention is granted or denied by the relevant authority (the Municipality and the Soprintendenza, a peripheral office of the Ministry for Cultural Heritage and Activities and Tourism). This area includes the World Heritage property’s buffer zone. The safeguarding dispositions introduced by the Piano Territoriale Paesaggistico Regionale adopted by the Regione Lazio according to Regional Law 24/1998 also apply to Villa d’Este.

The management of the Villa d’Este falls under the responsibility of the competent offices of the Ministry of Cultural Heritage and Activities and Tourism which has a head office within Villa d’Este dedicated to the preservation, management and valorization of the monument. To achieve these goals, programmes for the maintenance, preservation and improvement of the services to the visitors are drafted on an annual basis.

Province of Rome, Region of Latium