The List University and Historic Precinct of Alcalá de ...
Print

Founded by Cardinal Jiménez de Cisneros in the early 16th century, Alcalá de Henares was the world's first planned university city. It was the original model for the Civitas Dei (City of God), the ideal urban community which Spanish missionaries brought to the Americas. It also served as a model for universities in Europe and elsewhere. 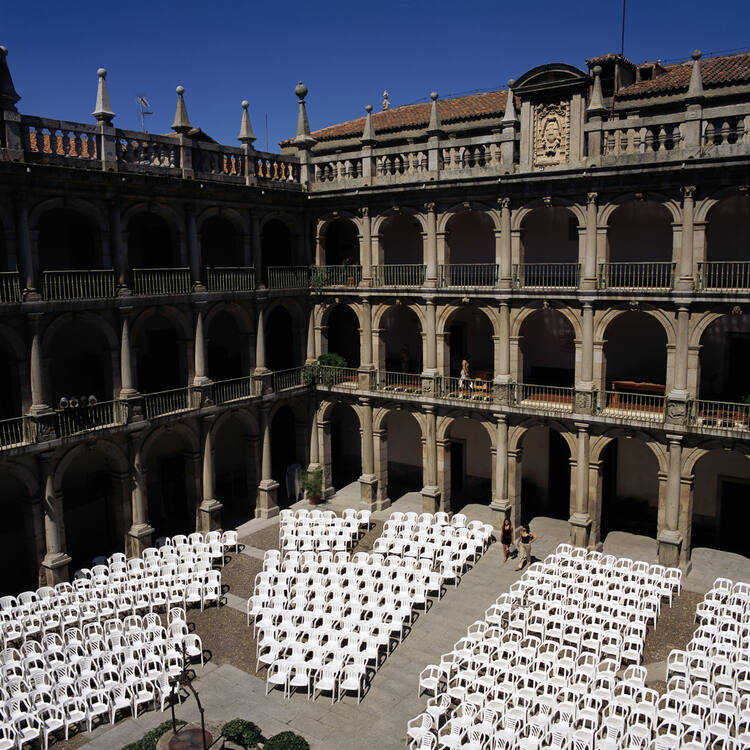 University and Historic Precinct of Alcalá de Henares is located in the Autonomous Community of Madrid, 30 km from the capital city of Madrid. The property covers an area of 79 ha and includes a magnificent complex of historic buildings, such as the exceptional Colegio Mayor de San Idelfonso or the Monastery of St Bernard. The University Precinct begins at the Plaza Cervantes (the former Plaza Mayor) and extends to the east of the medieval city. It was enclosed by demolishing part of the earlier medieval walls and prolonging them around the new urban development. The layout is based on humanist planning principles, with two main axes and a central place (nowadays Plaza de San Diego) where the main University buildings are located. The walled medieval precinct has the Iglesia Magistral (Cathedral) at its core, from which the street network radiates, merging into the former Jewish and Arab quarters. To the north-west is the ecclesiastical precinct, surrounded by its own walls; at its heart is the Archbishop’s Palace. Within the historic centre there are several protected buildings under the Spanish legislation.

The city has its origins in the Roman town of Complutum. It expanded during the Middle Ages and flourished in the 16th century thanks to the foundation of the University. The concept of this city, its planning and provisions, belong to the project designed by the University’s founder, Cardinal Cisneros. He had bought land in the east of the medieval city with the aim of providing the necessary infrastructures to carry out his university project, a project that included colleges, halls of residence, hospitals and printers, all of which contributed to the University of Alcalá’s outstanding intellectual achievement for hundreds of years. Juxtaposed with the medieval town, this new city was converted into an exceptional model that embodied the Augustinian model of the City of God, as well as to the way it was planned and the buildings it was endowed with. The dream of the Civitas Dei became a reality, reaching the highest levels of intellectual achievement of the era in the sciences, language and literature, personified by its most illustrious son, Miguel de Cervantes through his universal work ‘Don Quixote’.

Alcalá de Henares was designed with the strict purpose of being the seat of a university. It was the first city of this kind in history and it became a University City model for the Americas and Europe. Alcalá exported its prestige and its form of organization: a microcosm where religious orders, the town citizens, the academic world, education and knowledge all lived together. It is also a unique example of the architecture pertaining to the House of Austria, characteristic in the centre of Spain during the Baroque period.

Criterion (ii): Alcalá de Henares was the first city to be designed and built solely as the seat of a university, and was to serve as the model for other centres of learning in Europe and the Americas.

Criterion (iv): The concept of the ideal city, the City of God (Civitas Dei), was first given material expression in Alcalá de Henares, from where it was widely diffused throughout the world.

Criterion (vi): The contribution of Alcalá de Henares to the intellectual development of humankind finds expression in its materialization of the Civitas Dei, in the advances in linguistics that took place there, not least in the definition of the Spanish language, and through the work of its great son, Miguel de Cervantes Saavedra and his masterpiece Don Quixote.

The University and Historic Precinct of Alcalá de Henares have maintained the values that made Alcalá a creation to be imitated for centuries.

The grid-like urban layout and design of the university, the medieval city street networks with its Calle Mayor as the main artery, as well as the Baroque archways, are all in an exemplary state of conservation. More importantly, most of the buildings that were constructed when the university was created have maintained or recovered their original uses, whether academic, religious, civil or residential.

The property appropriately reflects the importance of the creation of the first planned University City in history and the representation of the Civitas Dei in the Baroque period. In addition, the precinct has a total of 785 buildings of which 465 are protected within the urban plan, that is to say, 60% of the buildings are listed and are declared to be of historic interest.

Therefore, in spite of the closure of the University between 1836 and 1976, the damage suffered during the Civil War, and the lack of protection during part of the 20th century until it was declared by the Spanish state to be of Historic Value in 1968, Alcalá has conserved the integrity of the precinct as a whole.

In spite of the many vicissitudes that it has undergone in the past 160 years the property has retained a substantial degree of authenticity in its urban fabric and in many of its historic buildings, including representative institutional buildings as well as protected residential buildings, authenticity has been retained as far as materials and form are concerned.

When the University was closed in 1836, most of its buildings were used for different purposes such as barracks, prisons and administrative offices. However, as they were used and occupied continuously over the years, these buildings were conserved without suffering major alteration.

The legal protection of the property and the re-opening of the University also triggered an intensive process of recuperation that allowed for the recovery of its authenticity of function after a century and a half. Most of the buildings of historic significance are once again being used to house the academic institutions, for which they were originally built. In addition, the city’s convents are still being used for religious purposes, as are certain welfare institutions.

Alcalá’s historic city centre has the highest degree of legal protection since it was declared to be of Historic Value in 1968. Both the 1985 Ley de Patrimonio Histórico Español (the Spanish State’s Heritage Law), as well as the 1998 Ley de Patrimonio Histórico de la Comunidad de Madrid (the Autonomous Community of Madrid’s Heritage Law), protect the historic precinct as a whole, as well as individual buildings that have special listings.

Additionally in 1984, the city council established protection regulations that were complemented in 1991 by the Plan General de Ordenación Urbana (Town Planning Act) and which culminated in the Plan Especial de Protección del Casco Histórico (Special Protection Act for the Historic City Centre) passed in 1998.

The Plan Especial lays down regulations regarding works of consolidation, restoration, refurbishment and re-structuring according to the level of protection of the building: monumental, comprehensive, structural and environmental, and, in each case, the type of construction and materials of the building must be respected. In addition, the regulations regarding the construction of new buildings depend on the historic constructions that are to be recovered, and restrictions regarding height, the given use of the building and aesthetic conditions as well as the position of advertising and other installations on the constructions. Provisions are also included to carry out a methodical archaeological study of every intervention in the historic precinct.

For the financing of interventions in the historic precinct, Alcalá has a Consortium constituted by the City Council, the University and the Autonomous Community of Madrid. It also has its own financial resources as well as those that come from regional administrations and European funds.

The Management Plan for the Historic Precinct will also take into consideration aspects regarding mobility, tourism, amenities, infrastructures and the urban pattern, integrating interventions that have already been carried out. The regulation of these actions aims to prevent the potential threats posed by urban mobility, overexploitation and the depopulation of the historic precinct. Project proposals are set according to an investment scheme and will be monitored through a programme based on a precise group of indicators. In addition there is a plan to reform many of the inappropriate constructions built in the 1970s.