Mount Etna is an iconic site encompassing 19,237 uninhabited hectares on the highest part of Mount Etna, on the eastern coast of Sicily. Mount Etna is the highest Mediterranean island mountain and the most active stratovolcano in the world. The eruptive history of the volcano can be traced back 500,000 years and at least 2,700 years of this activity has been documented. The almost continuous eruptive activity of Mount Etna continues to influence volcanology, geophysics and other Earth science disciplines. The volcano also supports important terrestrial ecosystems including endemic flora and fauna and its activity makes it a natural laboratory for the study of ecological and biological processes. The diverse and accessible range of volcanic features such as summit craters, cinder cones, lava flows and the Valle de Bove depression have made the site a prime destination for research and education. 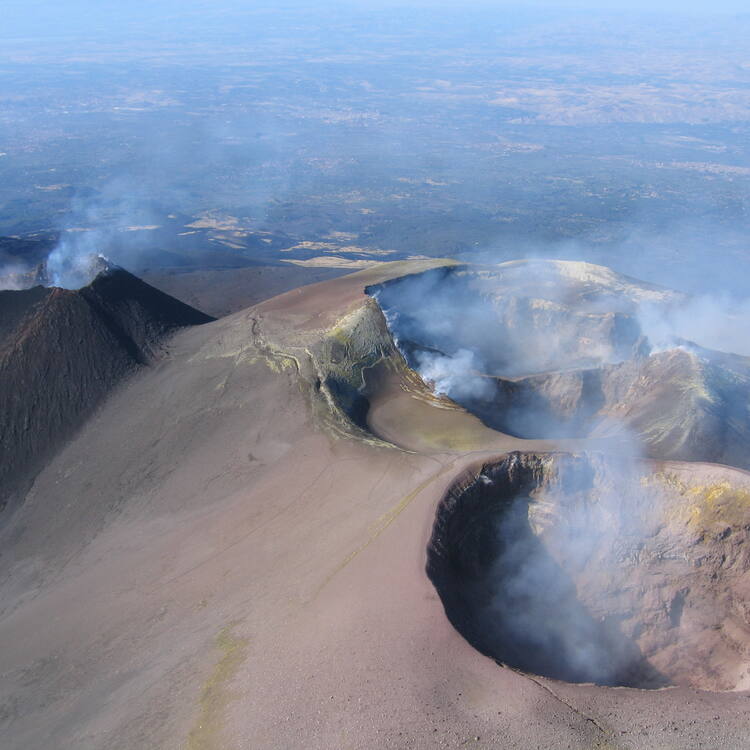 Mount Etna World Heritage Site (19,237 ha) comprises the most strictly protected and scientifically important area of Mount Etna, and forms part of the Parco dell’Etna Regional Nature Park. Mount Etna is renowned for its exceptional level of volcanic activity, and the documentation of its activity over at least 2,700 years. Its notoriety, scientific importance, and cultural and educational value are of global significance.

Criterion (viii): Mount Etna is one of the world’s most active and iconic volcanoes, and an outstanding example of ongoing geological processes and volcanic landforms. The stratovolcano is characterized by almost continuous eruptive activity from its summit craters and fairly frequent lava flow eruptions from craters and fissures on its flanks. This exceptional volcanic activity has been documented by humans for at least 2,700 years – making it one of the world's longest documented records of historical volcanism. The diverse and accessible assemblage of volcanic features such as summit craters, cinder cones, lava flows, lava caves and the Valle de Bove depression have made Mount Etna a prime destination for research and education. Today Mount Etna is one of the best-studied and monitored volcanoes in the world, and continues to influence volcanology, geophysics and other earth science disciplines. Mount Etna’s notoriety, scientific importance, and cultural and educational value are of global significance.

The boundaries of the property are clearly defined and encompass the most outstanding geological features of Mount Etna. The property includes very little infrastructure: a few forest / mountain tracks, a number of basic mountain shelters along the main forest tracks, and over 50 small seismic monitoring stations and a scientific observatory.

The Parco dell’Etna (Etna Park) was established as a Regional Nature Park by Decree of the President of the Sicilian Regional Authority in May 1987. The property includes part of this Park, comprising the zone defined as an integral reserve. In addition, nine Natura 2000 sites overlap the property to various degrees, providing additional protection for 77% of the area under European legislation.

The regulations provided within the Decree provide for adequate protection of the key values of the property. Since the completion of a land acquisition process in 2010, 97.4% of the property’s area is in public ownership (region or communities). In contrast, 56.6% of the buffer zone is privately owned.

The management of the property is coordinated by Ente Parco dell’ Etna, established as the managing authority of Etna Park by Decree of the President of the Sicilian Regional Authority in May 1987, working in close cooperation with the Regional Authority of State Forests and the Regional Corps of Forest Rangers (Corpo Forestale). Management is guided by a long-term management plan and Triennial Intervention Programmes.

The property has no permanent population, is free of roads, and its use restricted to research and recreation. Vehicle access to the limited network of forest and mountain tracks appears to be strictly controlled (e.g. through gates and fences) and is only permitted for park management purposes and authorized activities such as research and organized 4x4 drives on the main track from the tourism facilities in the buffer zone to the INGV observatory. Except for possible maintenance of the observatory, no construction projects are permitted or planned within the property. Public access to the top of Mount Etna may be officially prohibited for safety reasons, although this regulation has been difficult to enforce. Organized recreational activities such as mountain biking and horse / donkey riding require advance authorisation. Although they appear to be limited at present, they need to be well monitored and managed to avoid negative impacts such as erosion and disturbance of wildlife. No dogs are allowed in the property and illegal hunting appears to be under control. Low-intensity grazing is permitted and occurs in parts of the property in the summer season. Limited silvicultural interventions are implemented in the property to reduce the risk from forest fires and maintain access routes. Climate change has the potential to increase the risk of forest fires in the region and impact the species and communities on Mount Etna. Natural hazards resulting from the volcanic activity of the property will always pose a risk to certain features and facilities of the park and beyond. Strengthened park visitor facilities are needed, taking into account best practice and lessons learned at other comparable World Heritage properties.