This huge 1.5 million-ha park has successive tiers of vegetation rising from 150 to 4,200 m above sea-level. The tropical forest in the lower tiers is home to an unrivalled variety of animal and plant species. Some 850 species of birds have been identified and rare species such as the giant otter and the giant armadillo also find refuge there. Jaguars are often sighted in the park. 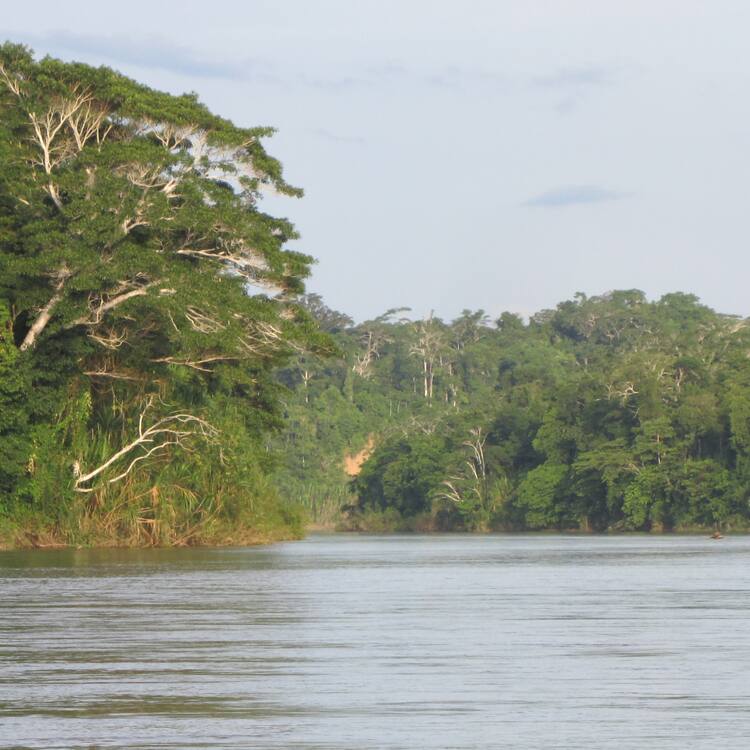 On the Manu River © Marc Patry

Manu National Park is a globally renowned haven of terrestrial biodiversity at the meeting point of the Tropical Andes and the Amazon Basin in Southwestern Peru. As a vast, geographically and economically isolated watershed, the still roadless property has been spared from most human impacts and is difficult to access to this day. The originally inscribed area was extended to 1,716,295 hectares in 2009, spanning the complete altitudinal gradient of the Eastern slope of the Andes from around 350 to above 4,000 m.a.s.l. The in some places precipitous transition includes high Andean Puna grasslands, mountain cloud forests, Yunga forests and lowland rainforest. Fed from numerous whitewater creeks in the mountains, the Manu River meanders through the lowland forests, before it joins the mighty Madre de Dios River at the Southern edge of the property. As evidenced by Incan and Pre-Incan ruins and petroglyphs, there is a long history of indigenous occupation. The local legend of Paititi, according to which the "Lost City of the Incas" is located within what is today the property, has lured researchers and adventurers alike. Today, various indigenous peoples are the only permanent inhabitants. Some of them are sedentary and in regular contact with the “modern world”, while others maintain a semi-nomadic lifestyle as hunter-gatherers in so-called "voluntary isolation" or “initial contact”, respectively.

The immense variety of Manu National Park in terms of altitude, microclimate, soils and other ecological conditions results in a complex mosaic of habitats and niches. There is a broad spectrum of plant communities, ranging from the seemingly homogenous but highly diverse Andean grasslands to a range of mostly pristine forest types. Estimates of plant diversity range between 2,000 and 5,000, with some scientists even assuming considerably higher numbers. Records of fauna are similarly impressive with well over 1000 vertebrate species, including at least 200 species of mammals and more than 800 species of birds. Among the mammals are the Giant Otter, 13 different species of primates and eight felids, including Jaguar, Puma and the elusive and endangered Andean Mountain Cat. The wide range of estimates in various taxonomic groups of fauna and flora illustrates how little is known, let alone understood about the diversity of life in the property. In the medium and longer term developments in the surroundings of Manu National Park such as gas extraction and road construction may affect the still mostly pristine property in various ways. Careful planning and management is needed to balance development needs with the integrity of a global conservation gem.

Criterion (ix): Manu National Park has a remarkable location at the meeting point of the Tropical Andes and the Amazonian lowland forests. The massive altitudinal gradient has favoured an extremely broad range of ecological conditions and the evolution of highly diverse species and ecological communities. The landscape diversity ranges from high Andean grasslands to various forests types, including pristine montane cloud forests and lush lowland rainforest. The combination of topography, ecological conditions and isolation have permitted the almost undisturbed and ongoing evolution of an extraordinary diversity of life at all levels and a high degree of endemism. In addition to the diversity of life, Manu National Park is also known for an unusually high abundance of fauna across many taxonomic groups.

Criterion (x): The extraordinary biodiversity combined with the large size and excellent conservation state makes Manu National Park a protected area of major and global biodiversity conservation importance. More than 200 species of mammals, 800 species of birds, 68 species of reptiles, 77 species of amphibians and impressive numbers of freshwater fish imply a diversity of vertebrates matched only in very few places of the World. Numbers in other taxonomic groups are at least as impressive, for example the more than 1,300 recorded species of butterflies out of probably several hundreds of thousands of arthropods. Thousands of higher plant species are distributed across the diverse ecosystems, habitats and niches. Hundreds of tree species have been identified, often jointly growing within very small areas. For decades, the property has been among the foremost references for scientific research in tropical ecology. As such the property has significantly helped our understanding of tropical forest ecosystems. Even seasoned researchers are overwhelmed not only by the diversity of life but also by the impressive abundance of vertebrates, including mammals. Despite the major record of research, even today taxonomic studies invariably reveal species unknown to science, including vertebrates, clear evidence that Manu continues to hold many of its biodiversity secrets.

The property benefits from a natural protection at a relatively large scale due to its remote location and is considered to be one of the most pristine areas of the Peruvian Amazon. The presence of large top predators in natural population densities, such as Jaguar, Puma, Giant Otter and Harpy Eagle, provides evidence of the near-pristine overall state of Manu National Park. Unlike other parts of the Amazon Manu National Park is believed to be still largely free of alien invasive species. The property is today embedded in a much broader conservation complex comprised of different categories of protected areas and indigenous communal areas, including the contiguous including Alto Purus National Park, Megantoni National Sanctuary, adding another layer of protection. There are functional corridors extending all the way to the Brazilian and Bolivian Amazon. Since the extension of the property, the watershed of the Manu River, a major tributary to the Madre de Dios, is protected in its entirety. Direct human use and interference is minimal and mostly restricted to small numbers of indigenous residents. Provided that they maintain a lifestyle compatible with conservation objectives, their presence is not believed to negatively affect the conservation values of Manu National Park. The integrity of the property could be compromised by inappropriate developments in its vicinity, implying a need to strongly consider the surrounding buffer zone in protection and management efforts.

The geographic isolation and longstanding protection have saved Manu National Park from changes that have been occurring elsewhere in the Peruvian Amazon. The formal conservation history started in 1968, when Manu Nature Reserve was declared. Owing to the dedication of a group of Peruvian conservationists and international supporters the national park was formalized by Supreme Decree in 1973. In 1977, Manu National Park was recognized by UNESCO as the core zone of an even larger biosphere reserve. Both the national park and the biosphere reserve are today under the authority of Peru's national protected areas agency SERNANP under the Ministry of the Environment. The zonation of the government-owned park distinguishes various zones. The by far largest is the Restricted Zone, consisting mostly of undisturbed forests and dedicated exclusively to conservation with controlled access for researchers and de facto accepted indigenous subsistence resource use. Other, smaller zones are a Special Use Zone, two distinct Recreational Zones, a Cultural Zone and a Recuperation Zone covering relatively small Andean areas impacted by livestock and related use of fire. The smallest zone is a so-called Service Zone around Cocha Cashu Biological Station and the various control posts manned by rangers. The management of the property is guided by a Master Plan with a committee comprised of various stakeholders set up to ensure local participation in and contributions to management.

Needs identified in Master Plans in terms of staff numbers, resources and programme activities reveal implementation and funding gaps. The population near the property is scattered into small communities engaged in subsistence and small-scale commercial agriculture and animal husbandry. Both the farming communities and the indigenous residents have a localized but manageable impact on the property. Despite the lack of acute pressures a number of concerns stemming from broader developments in the region are well-documented. New roads across the Andes and smaller roads in the vicinity of the property are likely to induce change by opening access. Indirect impacts from the Camisea Gas Field and exploration near the property require careful monitoring. The development in the buffer zone, while formally not part of the inscribed property, may well be decisive for the future of the property. One particularity of the property is that it protects indigenous residents from external pressures and undesired attempts to contact them. There is a need to define a clear policy for their future. 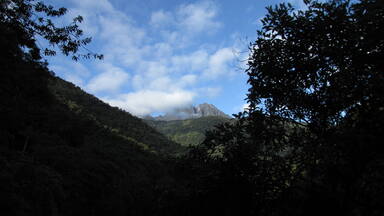