The New Zealand Sub-Antarctic Islands consist of five island groups (the Snares, Bounty Islands, Antipodes Islands, Auckland Islands and Campbell Island) in the Southern Ocean south-east of New Zealand. The islands, lying between the Antarctic and Subtropical Convergences and the seas, have a high level of productivity, biodiversity, wildlife population densities and endemism among birds, plants and invertebrates. They are particularly notable for the large number and diversity of pelagic seabirds and penguins that nest there. There are 126 bird species in total, including 40 seabirds of which five breed nowhere else in the world. 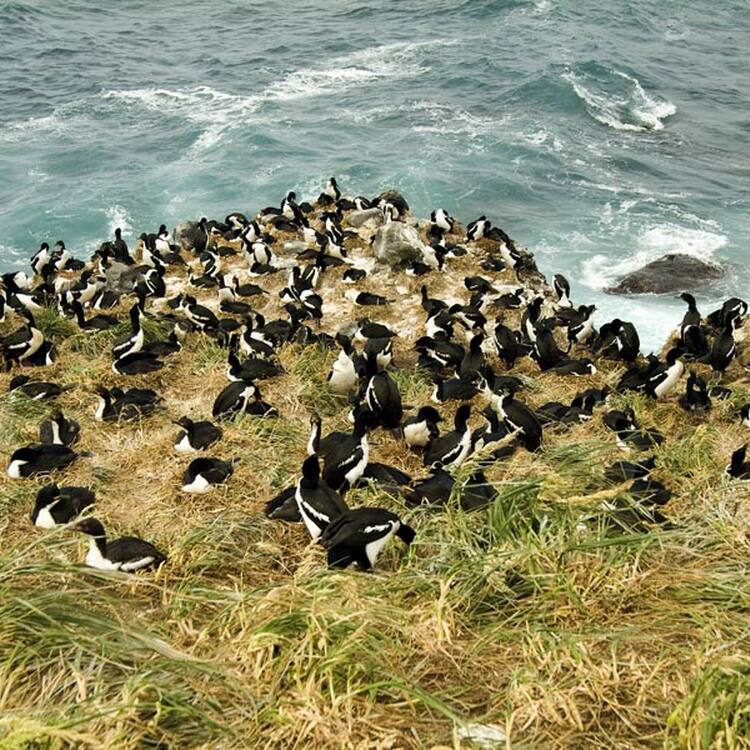 The New Zealand Sub-antarctic Islands (NZSAI) encompasses five island groups that lie between latitudes 47o and 53o south; Snares Islands/Tini Heke, Bounty Islands, Antipodes Islands, Auckland Islands/Motu Maha and Campbell Island/Motu Ihupuku and the islands surrounding it. The World Heritage status also applies to the marine environment out to 12 nautical miles from each group. Including a total land area of 76,458ha, the marine area takes in 1,400,000 ha and constitutes one of New Zealand’s remotest protected natural areas, including some of the world’s least-modified islands.

The property lies between the Antarctic and Subtropical Convergences and the seas have a high level of productivity, biodiversity, wildlife population densities and endemism. While the NZSAI’s are all located on the Pacific Tectonic Plate, the different geological history and age of each island group, and their geographical isolation from mainland New Zealand and from each other, has shaped the unique and remarkable biodiversity of the islands including distinctive plants, birds, invertebrates, marine mammals, fish and marine algae assemblages. The biota contains numerous endemic and/or rare elements, and some extraordinary examples of adaptation.

Particularly notable is the abundance and diversity of pelagic seabirds and penguins that utilise the islands for breeding. The property supports the most diverse community of breeding seabirds in the Southern Ocean. There are 126 species of birds, including 40 seabirds, eight of which breed nowhere else in the world. The islands support major populations of 10 of the world’s 22 species of albatross and almost 2 million sooty shearwaters nest on Snares Island alone. Land birds also display a surprising diversity, considering the limited land area available, with a large number of threatened endemics including one of the world’s rarest ducks. More than 95% of the world’s population of New Zealand sea lion (formerly known as Hooker’s sea lion) breed here and the marine environment provides critical breeding areas for the southern right whale.

The plant life of the NZSAI is notable for its diversity, special forms and unique communities, yet another outstanding example of the biological and ecological processes significant in the property. The Snares Islands and two islands in the Auckland group (Adams and Disappointment), are among the last substantial areas in the world harbouring vegetation essentially unmodified by humans or alien species. Another notable feature about the NZSAI is the land-sea interface and the close inter-dependence of both environments for many of the species – the inclusion of the marine environment out to 12 nautical miles in the world heritage property recognises this.

Criterion (ix): Isolation, climatic factors, and seven degrees of latitudinal spread have combined to significantly influence the biota of the islands. Consequently they provide scientific insights into the evolutionary processes affecting widely-spread oceanic islands, varying from relatively mature endemic forms to relatively immature taxa, constituting a fascinating laboratory for the study of genetic variation, speciation and adaptation, particularly in the insulantarctic biogeographic province.

Evolutionary processes, such as the loss of flight in birds and invertebrates, offer unique opportunities for research into island dynamics and ecology. Another outstanding feature is the preponderance of ‘megaherbs’ within the plant biodiversity. These large herbs, often with brightly coloured flowers are considered to display unique evolutionary adaptation to the distinctive sub-antarctic climate – with its cloud cover (and lack of solar radiation), lack of frosts, strong winds, and high nutrient levels (derived from seabird transference of nutrients).

Criterion (x): The NZSAI, and the ocean that surrounds and links them, support an extraordinary and outstanding array of endemic and threatened species among the marine fauna, land birds, and invertebrates. As a group they are distinct from all other island groups, having the highest diversity of indigenous plants and birds. Of particular significance: the most diverse community of seabirds in the world with eight species endemic to the region; including four species of albatross, three species of cormorants (one of which, the Bounty Island Shag, is the world’s rarest cormorant) and one species of penguin; 15 endemic land birds including snipe, parakeets and teal; breeding sites of the world’s rarest sea lion (the New Zealand (or Hooker’s) sea lion); and a significant breeding population of the southern right whale.

Together with neighbouring Macquarie Island, the NZSAI represent a Centre of Plant Diversity and have the richest flora of all the sub-antarctic islands with 35 endemic taxa. The “megaherbs’ are unique to the NZSAI and Macquarie Island.  The Snares Group and two of the Auckland Islands are of particular biodiversity conservation significance due to the absence of any human and exotic species modification.

The NZSAI have benefited from their remoteness providing them with a high degree of natural protection. With their geographical isolation from mainland New Zealand and from each other, the NZSAI include some of the world’s most unmodified islands. In particular; the Snares and two islands in the Auckland group (Adams and Disappointment), are among the last substantial areas in the world harbouring vegetation essentially unmodified by human impacts. Many of the islands remain in virtually pristine condition, being rat and cat free and rarely visited by humans. The Antipodes group have undergone minimal modification from a pristine state despite sealers once being active there. The boundaries of the property include all land area of these island groups and are sufficient to protect the core natural values of the property. The geological and biological integrity of the terrestrial component of the NZSAI is considered high with conservation actions underway to reduce the impact of exotic species.

One of the island groups (Auckland Islands) is surrounded by an overlapping no-take marine reserve and marine mammal sanctuary out to 12 nautical miles.  In 2008, a stakeholder forum was convened to consider additional marine protection measures in the Sub-Antarctic region.  As a result of that process, three new marine reserves have been approved and are awaiting implementation.  These reserves will protect 100% of the territorial sea surrounding Antipodes Island, approximately 58% of the territorial sea around the Bounty Islands and approximately 39% of the territorial sea around Campbell Island.  In addition, restrictions on fishing methods will be in place in the remaining territorial sea areas around these island groups.  These protection measures significantly enhance the integrity of the islands' marine environments, and complement the protection afforded to the islands themselves. Bycatch of pinnipeds and seabirds remain important issues in the Subantarctic marine environment, and the fishing industry, New Zealand Government and environmental groups continue to work together to address these issues.

Managed by the Department of Conservation on behalf of the Government and the people of New Zealand the comprehensive application of legal, administrative and management systems in place ensure the areas of the NZSAI that are above mean high water have the highest level of protection under New Zealand legislation, being classified as Nature Reserves under the Reserves Act 1977. In addition, the five island groups have each been identified as National Reserves, which acknowledges “values of national or international significance” (section 13 Reserves Act 1977). The islands are also covered under the Wildlife Act 1953; the Wild Animal Control Act 1977; the Resource Management Act 1991; the Marine and Coastal Area (Takutai Moana) Act 2011; the Marine Mammals Protection Act 1978; and the Fisheries Act 1996. The existing no-take marine reserve and marine mammal sanctuary around the Auckland Islands are managed by the Department of Conservation.  Proposed marine reserves around Antipodes, Bounty and Campbell Islands will also be managed by the Department of Conservation.

Under section 4 of the Conservation Act 1987 the Department is required to give effect to the principles of the Treaty of Waitangi.  In practice this implies a partnership agreement with tängata whenua (Iwi or hapū that has customary authority in a place) that have manawhenua (prestige, authority) over the area. As a part of the Crown’s settlement with Ngāi Tahu, protocols have been developed on how the Department and Ngāi Tahu will work together on specified matters of cultural significance to Ngāi Tahu. Ngāi ai Tahu ki Murihiku are kaitiaki (guardians) of the Southland region, including the Sub-antarctic Islands. They have prepared a management plan: Te Tangi a Tauira—the Cry of the People, which consolidates Ngāi Tahu ki Murihiku values, knowledge and perspectives on natural resource and environmental management issues.

The range of legislation relating to the NZSAI is aimed at the protection and conservation of the species and ecosystems within the property. The Resource Management Act 1991 requires a Regional Coastal Plan to be developed, with the aim of promoting the sustainable management of natural and physical resources of the islands (jurisdiction is mean high water springs to outer limits of the territorial sea). A Regional Coastal Plan for the Sub-antarctic and Kermadec Islands (Coastal Plan) was notified on 15 January 2011. While yet to be operative, the rules took immediate legal effect on the date of notification. The key issues the plan seeks to address are to minimise the risk of oil spills and biosecurity breaches. The NZSAI are managed in accordance with a Conservation Management Strategy (CMS), which is a statutory document prepared under the Conservation Act 1987 that aims for integrated management of the natural and historic resources of the islands and specifies what activities are considered appropriate.

The integrity of the marine area and the conservation of the marine resources is a key management issue for the property. Work to further assess the risk to protected wildlife from fisheries impacts is in progress.  Studies have revealed the status and significance of the (formerly endangered) southern right whale population in the waters surrounding the Campbell and Auckland islands. The New Zealand subantarctic waters are also on the migratory path of several additional whale species, including minke, sei, fin, blue and humpback whales, highlighting the importance of the marine environment and adding further weight to the natural values of the property.

The impacts of alien mammal species, currently restricted to pigs, cats and mice on Auckland Island and mice on Antipodes Island, along with a range of alien plant and invertebrate species have in most cases been addressed though the management plans. Previous eradication programmes have removed cattle, sheep, goats, rabbits, rats and mice from several of the islands. New Zealand authorities plan to eventually remove all alien mammal species from the islands and once achieved this will provide a model for oceanic islands elsewhere.

Increased tourism demand has resulted in a significant increase in tourist numbers and activity within the property and the challenge is to manage this increased demand while protecting the experience tourists are seeking and most importantly ensuring the longer term protection of the islands and the immediate marine environment. The CMS and Coastal Plan work together to address these issues and recommend approaches to limit the impact of tourism activities while also enabling the benefits of access to the property.