Cette page n'est pas intégralement disponible en français, vous pouvez la consulter en anglais.
The UNESCO World Heritage Centre has been working together with the Government of China on a methodological approach for the preparation of a nomination for the cultural properties along the Silk Road to the World Heritage List. Although the network passed through China, Central/Western and South Asia and beyond, China is the only country that has placed its Silk Road section on the national ‘Tentative List' for World Heritage nomination.

In August 2003 and July 2004, UNESCO sent expert missions, sponsored by the Netherlands Funds-in-Trust at the World Heritage Centre, to the Chinese section of the Silk Road in order to research and improve understanding of ‘Cultural Routes' as a possible candidate for inscription on the World Heritage List. The missions also sought to develop a systematic approach towards the identification and nomination of the Chinese section of the Silk Road, and in particular the Oasis Route which, together with the Steppe Route and the Maritime Route, is one of three intercultural routes along the Silk Road that will tell the story of the Chinese Silk Road in a comprehensive manner.

An impressive number of monuments and sites are to be found along the Oasis Route, which extends over some 4,450 km from Xi'an in Shaanxi Province to Kashgar in Xinjiang Uygur Autonomous Region. Almost the entire original road, however, has disappeared, assuming that it ever existed, as much of it consisted of no more than tracks through the desert, and has been replaced by a four-lane highway. Some uncertainty remains about the best way to proceed and the missions sought to co-operate in the development of an approach and methodology for the identification and nomination of a serial and linear Cultural Route.

The UNESCO missions to China concluded that a cultural route could be defined in terms of space (the route ran through sites, monuments, constructions, buildings, ways, and areas of influence); time (the beginning and end of its use, its frequency, intensity and variations) and cultural criteria (impact of spiritual and/or material exchanges; impact on human memory or experience, impact of the volume and nature of the exchanges). The mission recommended the establishment of a Silk Road Nomination Task Force management body to co-ordinate studies and preparation of the World Heritage nomination.

During a Sub-regional Workshop for follow-up of the Periodic Reporting Exercise held in Almaty, Kazakhstan in November 2005, representatives from the Central Asian countries (Kazakhstan, Kyrgyzstan, Tajikistan, Turkmenistan and Uzbekistan) adopted an Action Plan for the implementation of the World Heritage Convention in Central Asia in which the serial nomination of the Silk Road was given the highest priority. The participants agreed to further develop and consolidate this initiative at the UNESCO Consultation Workshop to be held in Turpan, Xinjiang Uygur Autonomous Region, the People's Republic of China. 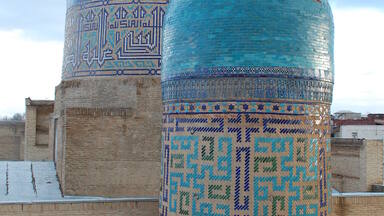 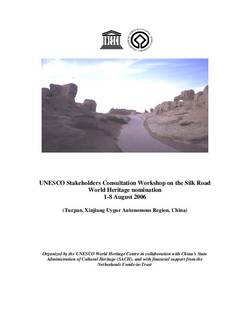