A former Viking site on the island of Gotland, Visby was the main centre of the Hanseatic League in the Baltic from the 12th to the 14th century. Its 13th-century ramparts and more than 200 warehouses and wealthy merchants' dwellings from the same period make it the best-preserved fortified commercial city in northern Europe. 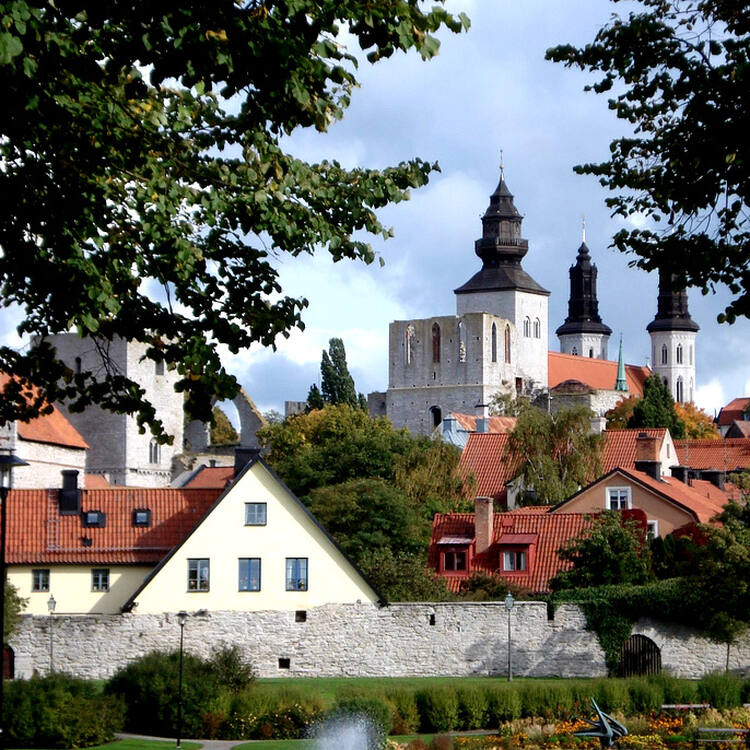 The Hanseatic Town of Visby is a unique example of a northern European medieval walled trading town with a preserved and notably complete townscape and assemblage of high-quality historic structures. Together these elements graphically illustrate the form and function of this type of significant human settlement, which still prevails as a living town.

Visby lies on the Island of Gotland, about 100 km east of the mainland in the Baltic Sea. The settlement, dating from the Viking Age, was formed on a shore with a natural harbour, sheltered by steep cliff formations. Gotlandic merchants utilized it as a strategic point in trade within the Baltic Sea. They allied for the protection of their trading posts which developed into a federation or Hansa. By the 12th century Visby had come to dominate this trade, and all the commercial routes of the Baltic were channelled through the town. After the foundation of Lübeck in 1143, German merchants began to expand their sphere of interest into the Baltic Sea and settled in Visby. It became the only trading place on the island with the privilege of trading with German towns and hence the main centre of the Hanseatic League. During the 13th century, Visby changed from a seasonal trading place into an impressive metropolis, enclosed by a strong defensive wall and increasingly divorced from its rural hinterland. The wall imposed new restrictions on the Gotlandic traders creating tensions that led to civil war in 1288. German, Russian and Danish traders built stone warehouses in parallel rows from the harbour and the community expanded with guild houses, churches and residences. In the 14th century, Visby began to lose its leading position in the Hanseatic League due to plague around 1350 and invasion by the Danish army under King Valdemar Atterdag in 1361. Warfare and piracy in the 15th century and changed trading routes bypassing Visby severely affected trade on Gotland and the economy of Visby deteriorated. The end of Visby’s greatness came in 1525, when it was stormed by an army from Lübeck and the northern parts were partially burnt. In the 18th century Visby experienced a revival of trade and industry. Many warehouses were refurbished as housing and new buildings were added both on the ruins of earlier ones and on vegetable plots. The 19th century saw the construction of schools, a hospital, and a prison and the growth of a small shopping area on one of the main streets. The town began to expand beyond the medieval wall.

The ‘inhabited historic town’ includes the walled town and its immediate surroundings constituting an area of 105 ha. The urban fabric and overall townscape of Visby are its most important qualities. The well-preserved town wall, with its towers and gates, extends 3.4 km and is surrounded by dry moats and open spaces that together form a defensive network. Some of the limestone used as building material was quarried from here. Roads into the town through gates to the north, east and south, leading from the cliff to the harbour, date to the Viking era. The medieval street plan survives both above and below ground. Urban archaeology gives evidence to widespread building structures, streets paved with large limestone slabs and a sophisticated water and sewage system. The remains of over 200 warehouses and merchants’ dwellings are predominantly in Romanesque style. Medieval Visby had more churches than any other town in Sweden: 15 within the walls and two outside. These buildings reflect several building phases with Romanesque and Gothic features, and they served various functions – parish, guild, monastic and hospital churches. Many fell into decay after they were abandoned during the Reformation in the 1530s. Only St Mary’s Cathedral survives and is still in ecclesiastical use. A large amount of small vernacular wooden houses from the 18th and 19th centuries featuring horizontal plank construction used since the Viking period remain intact. They are found mainly in the eastern parts of the town and on the site of the former Visborg Castle.

Criterion (iv): The Hanseatic Town of Visby is an outstanding example of a North European medieval walled town which reflects with remarkable completeness its essentially late 13th-century form and function as one of the most important trading towns of the Hanseatic League between 1161 and 1360. This is reflected in the well-preserved town wall, street pattern, church ruins, medieval buildings and townscape.

Criterion (v): Visby is a characteristic example of a traditional human settlement that has evolved over time through continuous adaptation to the medieval form and function. The inhabited historic town has prevailed under the influence of socio-economic and cultural change. This has resulted in a townscape in which the medieval walled trading town has been retained with distinctive layers over time until the present day. Functional continuity is reflected in its structure as a county, diocesan, commercial and residential town.

The property includes the walled medieval town and the surrounding dry moats and open spaces. A significant proportion of the attributes are in good condition. The medieval urban plan is largely intact. The town wall has been subject to partial collapses over the years. The collapse of a section of the wall in 2012 led to a successful restoration and new knowledge about its state of conservation. The increasing use of the church ruins for events and activities requires the development of impact assessment and guidelines. On a building level, incremental change through alterations that disregard conservation principles results in a cumulative negative impact on heritage values. The visual integrity of the walled town and historic skyline is vulnerable as the town expands and develops. The functional continuity and structure of the town is vulnerable to the loss of functional diversity and traditional building skills. Certain key attributes are located outside of the property, e.g. the ruins of St George and Solberga monastery, the medieval gallows hill, limestone quarries and entry roads into the medieval town.

Visby is the best preserved North European walled town and example of a fortified commercial centre. It is the most complete of the early Hanseatic towns. The original form of Visby, displayed in its urban fabric and overall townscape, is its most important quality. The irregular street pattern and entry roads run from the cliff to the harbour, some with origins in the Viking era settlement. From its heyday as a Hanseatic trading centre, the limestone warehouses have maintained their dominance along three main streets parallel to the shoreline. The authenticity of the medieval building elements is demonstrated in shape and size, rectangular plan, and height and fabric. Subsequent layers of development have conformed to the medieval scale and town layout. The Gotlandic traditional lime production and use for stone, plaster and mortars have remained intact and play a crucial role in conservation and craftsmanship.

The town wall remains largely intact, and its high level of authenticity is exceptional. The well-preserved dry moats and open spaces surrounding the walled town form a fringe belt that accentuates and distinguishes the compact medieval town. Three parallel trenches in the northern parts of the wall are particularly distinctive. Twentieth-century urban planning took a Garden City approach to development beyond the wall, preserving considerable areas of open space with lower densities and strict control over building heights. While the medieval churches fell into decay, and lost their original function, the ruins are iconic carriers of architectural and historical significances that have remained more or less intact since the 19th century.

While Visby lost its function as a commercial metropolis during the 14th century, its urban continuity is still reflected in a living town with retail, business, residential, educational, cultural and tourist uses. The relocation of public authorities beyond the walled town has transformed its spirit of place as a vibrant office-based core into a largely seasonal residential area. Gotland and Visby are an attractive holiday destination and economically strong property owners are both an asset and a threat to the preservation of this environment.

The property ownership is mixed with public and private owners. The church ruins are owned and managed by the State, while St Mary’s Cathedral is owned by the parish. The town wall and its towers are primarily owned by the local authority and have traditionally been managed by the state. A small number of landmark buildings remain in local authority ownership although several have been sold due to privatization processes. The majority of the domestic houses and commercial properties are in private ownership. The statutory ‘detailed plan’ for the walled town of Visby together with the associated building code regulates preservation of the built environment and new development within the walls under the Planning and Building Act, for which the municipality is responsible. In addition, 257 building monuments are designated by the state under the Cultural Heritage Act, which also protects the archaeological remains of the entire property. The property is recognized by the state as an ‘area of national interest’ under the Environmental Code.

Management of the property rests with several organizations. Gotland Municipality is the coordinating organization, with a site manager, carrying the overall responsibility through the City/Regional Council. A World Heritage Studio brings together different functions and departments within the municipality concerning conservation and development. The state manages the town wall and the church ruins. The County Administrative Board is responsible for implementing the Cultural Heritage Act and has a supervisory role in conservation on behalf of the state. The World Heritage Advisory Council consists of a steering committee of three key organizations; Gotland Municipality, the County Administrative Board and Gotland Museum, as well as other stakeholders such as representatives of residents, businesses, tourism, property owners, research and education. A World Heritage Forum is held annually to facilitate public engagement and dialogue on specific issues. The management plan from 2003 is under review. Its objectives are integrated with the Development Plan for Visby 2025. Management of the town wall is presently being reconsidered. Negotiations are underway between the Swedish National Heritage Board, having traditionally been responsible for its maintenance, and the owner, Gotland Municipality. Successful future management of the town wall requires both long-term funding and a clear agreement between the authorities. A buffer zone needs to be demarcated to address development pressure in the vicinity of the property. The building of a new harbour for larger cruise ships requires a sustainable tourism framework. Processes of privatization, gentrification and increased tourism threaten the functional diversity and social balance of the town. A strategy for risk management needs to be developed, including a fire protection system.