This site, comprising several protected areas, is situated predominantly along the Great Escarpment on Australia’s east coast. The outstanding geological features displayed around shield volcanic craters and the high number of rare and threatened rainforest species are of international significance for science and conservation. 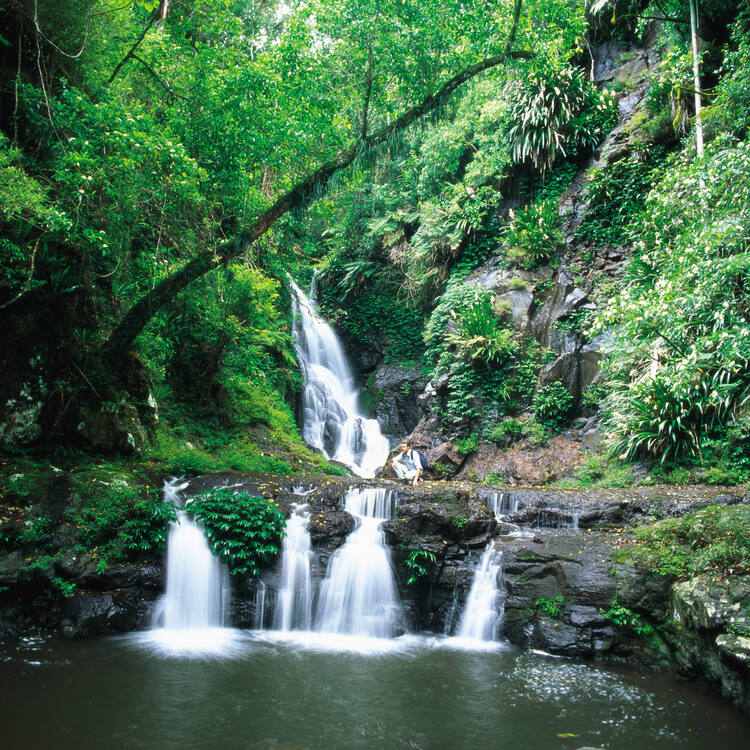 
The Gondwana Rainforests of Australia is a serial property comprising the major remaining areas of rainforest in southeast Queensland and northeast New South Wales. It represents outstanding examples of major stages of the Earth’s evolutionary history, ongoing geological and biological processes, and exceptional biological diversity. A wide range of plant and animal lineages and communities with ancient origins in Gondwana, many of which are restricted largely or entirely to the Gondwana Rainforests, survive in this collection of reserves. The Gondwana Rainforests also provides the principal habitat for many threatened species of plants and animals.

Criterion (viii): The Gondwana Rainforests provides outstanding examples of significant ongoing geological processes. When Australia separated from Antarctica following the breakup of Gondwana, new continental margins developed. The margin which formed along Australia’s eastern edge is characterised by an asymmetrical marginal swell that runs parallel to the coastline, the erosion of which has resulted in the Great Divide and the Great Escarpment. This eastern continental margin experienced volcanicity during the Cenozoic Era as the Australian continental plate moved over one of the planet’s hot spots. Volcanoes erupted in sequence along the east coast resulting in the Tweed, Focal Peak, Ebor and Barrington volcanic shields. This sequence of volcanos is significant as it enables the dating of the geomorphic evolution of eastern Australia through the study of the interaction of these volcanic remnants with the eastern highlands.

The Tweed Shield erosion caldera is possibly the best preserved erosion caldera in the world, notable for its size and age, for the presence of a prominent central mountain mass (Wollumbin/Mt Warning), and for the erosion of the caldera floor to basement rock. All three stages relating to the erosion of shield volcanoes (the planeze, residual and skeletal stages) are readily distinguishable. Further south, the remnants of the Ebor Volcano also provides an outstanding example of the ongoing erosion of a shield volcano.

Criterion (ix): TheGondwana Rainforests contains outstanding examples of major stages in the Earth’s evolutionary history as well as ongoing evolutionary processes. Major stages represented include the ‘Age of the Pteridophytes’ from the Carboniferous Period with some of the oldest elements of the world’s ferns represented, and the ‘Age of Conifers’ in the Jurassic Period with one of the most significant centres of survival for Araucarians (the most ancient and phylogenetically primitive of the world’s conifers). Likewise the property provides an outstanding record of the ‘Age of the Angiosperms’. This includes a secondary centre of endemism for primitive flowering plants originating in the Early Cretaceous, the most diverse assemblage of relict angiosperm taxa representing the primary radiation of dicotyledons in the mid-Late Cretaceous, a unique record of the evolutionary history of Australian rainforests representing the ‘golden age’ of the Early Tertiary, and a unique record of Miocene vegetation that was the antecedent of modern temperate rainforests in Australia. The property also contains an outstanding number of songbird species, including lyrebirds (Menuridae), scrub-birds (Atrichornithidae), treecreepers (Climacteridae) and bowerbirds and catbirds (Ptilonorhynchidae), belonging to some of the oldest lineages of passerines that evolved in the Late Cretaceous. Outstanding examples of other relict vertebrate and invertebrate fauna from ancient lineages linked to the break-up of Gondwana also occur in the property.

The flora and fauna of the Gondwana Rainforests provides outstanding examples of ongoing evolution including plant and animal taxa which show evidence of relatively recent evolution. The rainforests have been described as ‘an archipelago of refugia, a series of distinctive habitats that characterise a temporary endpoint in climatic and geomorphological evolution’. The distances between these ‘islands’ of rainforest represent barriers to the flow of genetic material for those taxa which have low dispersal ability, and this pressure has created the potential for continued speciation.

Criterion (x): The ecosystems of the Gondwana Rainforests contain significant and important natural habitats for species of conservation significance, particularly those associated with the rainforests which once covered much of the continent of Australia and are now restricted to archipelagos of small areas of rainforest isolated by sclerophyll vegetation and cleared land. The Gondwana Rainforests provides the principal habitat for many species of plants and animals of outstanding universal value, including more than 270 threatened species as well as relict and primitive taxa.

The Gondwana Rainforests protects the largest and best stands of rainforest habitat remaining in this region. Many of the rare and threatened flora and fauna species are rainforest specialists, and their vulnerability to extinction is due to a variety of factors including the rarity of their rainforest habitat. The Gondwana Rainforests also protects large areas of other vegetation including a diverse range of heaths, rocky outcrop communities, forests and woodlands. These communities have a high diversity of plants and animals that add greatly to the value of the Gondwana Rainforests as habitat for rare, threatened and endemic species. The complex dynamics between rainforests and tall open forest particularly demonstrates the close evolutionary and ecological links between these communities.

Species continue to be discovered in the property including the re-discovery of two mammal species previously thought to have been extinct: the Hastings River Mouse (Pseudomys oralis) and Parma Wallaby (Macropus parma).

Questions related to the small size of some of the component parts of the property, and the distance between the sites for the long-term conservation and continuation of natural biological processes of the values for which the property was inscribed have been raised. However, noting that the serial sites are in reasonable proximity and are joined by corridors of semi-natural habitats and buffers, compensation for small size and scattered fragments is being made through intensive management consistent with approved management plans and policy.

Since inscription, there have been significant additions to the protected area estate in both New South Wales and Queensland in the region encompassing the Gondwana Rainforests. These areas have undergone a rigorous assessment to determine their suitability for inclusion in the property and a significant extension of the property is planned as indicated by the addition of the property extension to Australia’s Tentative List in May 2010. In relation to ongoing evolution, the level of legislative protection provided for World Heritage properties will minimise direct human influence and enable the continuation of natural biological processes.

Institutional arrangements for the protection and management of Gondwana Rainforests are strong. The property is made up of 41 reserves, almost all of which are within the protected area estate, and primarily managed by the Queensland Parks and Wildlife Service and the New South Wales National Parks and Wildlife Service. Both States have legislation relating to protected areas and native flora and fauna that provide protection for the values of the Gondwana Rainforests.

In 1993, Governments agreed to establish a Coordinating Committee, comprised of on-ground managers from these agencies and the Australian Government, to facilitate the cooperative management of the property at an operational level. A Technical and Scientific Advisory Committee and a Community Advisory Committee have also assisted with management advice since their establishment in 2002.

In 2000 a Strategic Overview for Management for the Central Eastern Rainforest Reserves of Australia (now Gondwana Rainforests) World Heritage Area was published. This overarching document is a major element in guiding cooperative management by the three Governments in relation to the identification, protection, conservation, rehabilitation and presentation of the Gondwana Rainforests.

The impacts of climate change and high levels of visitation, undertaking effective fire management, and mitigating the effects of invasion by pest species and pathogens present the greatest challenges for the protection and management of Gondwana Rainforests. Climate change will impact particularly on those relict species in restricted habitats at higher altitudes, where particular microclimatic conditions have enabled these species to survive. Management responses include improving the resilience of the property by addressing other threats such as inappropriate fire regimes and invasion by pest species, and trying to increase habitat connectivity across the landscape. 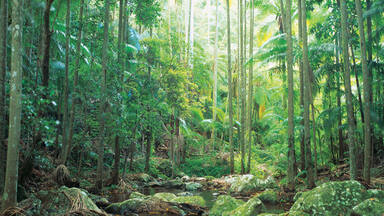 Bushfires in the Gondwana Rainforests of Australia
23 November 2019