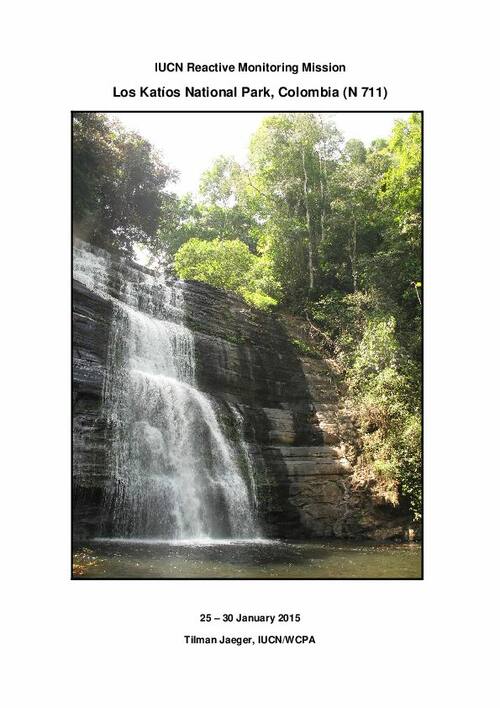 
Los Katios National Natural Park (hereafter PNNK) is a Colombian national park of roughly 72,000 ha, which was inscribed on the World Heritage List in 1994 under criteria (ix) and (x). PNNK is adjacent to the vast Darien National Park (597,000 ha) in neighboring Panama, a World Heritage site since 1981. While contiguous and functionally linked, the two adjacent parks do not formally constitute a transboundary World Heritage property.
Even within a much larger region famous for its biological and ecological wealth (referred to by some as the “Tumbes-Choco-Magdalena hotspot” or the “Choco-Darien Ecoregional Complex”), the moist lowland and montane forests and wetlands of the bi-national Darien Gap area stand out. Particularities include the (i) high levels of endemism, (ii) location at the core of a major biogeographic bridge, (iii) important ecosystem and habitat diversity along major altitudinal gradients and (iv) an overall high degree of integrity. Home to several Indigenous Peoples and Afro-Colombian communities, the area is also culturally diverse and rich.

PNNK finds itself within an area of strategic importance due to its location and wealth in natural resources. The entire area has been heavily affected by decades of internal armed conflict accompanied by forced displacement and atrocities committed by various actors. The compromised security situation has been facilitating the illegal extraction of natural resources, in particular of timber and wildlife in addition to the effects of state-promoted logging operations. Longstanding, controversial infrastructure plans add to the complexity of the setting. Faced with a deteriorating situation, some six years ago the State Party of Colombia requested that the World Heritage Committee inscribe PNNK on the List of World Heritage in Danger so as to draw national and international attention to the serious challenges. The World Heritage Committee met this exemplary request in 2009 in its decision 33COM 7B.34. PNNK has been on the World Heritage List in Danger since.

According to the Operational Guidelines inscription of a property on the List of World Heritage in Danger implies that ʺmajor operations are necessary for the conservation of the propertyʺ. The State Party has been fully aware of this necessity at all times and has embarked on a systematic management response. Despite ongoing reasons for concern there are consistent indications of steady progress, confirming a trend suggested in governmental reports and the documentation of the IUCN/WHC reactive monitoring mission in 2011.

While the 2011 mission was restricted to the capital of Bogota due to the security situation at the time, the current mission documented in this report was able to visit the property and hold individual and group meetings in Medellin, Turbo, Tumarado and Unguia with a broad range of national, regional and local stakeholders. As detailed in the Terms of Reference (see Annex 7.A) and the latest Committee decision (38COM 7A.32, see Annex 7.C), the mission had the objective to “assess progress with the implementation of the corrective measures and towards achieving the indicators of the Desired State of Conservation for the Removal of the property from the List of World Heritage in Danger (DSOCR), and to make a recommendation regarding the status of the property on the List of World Heritage in Danger.”