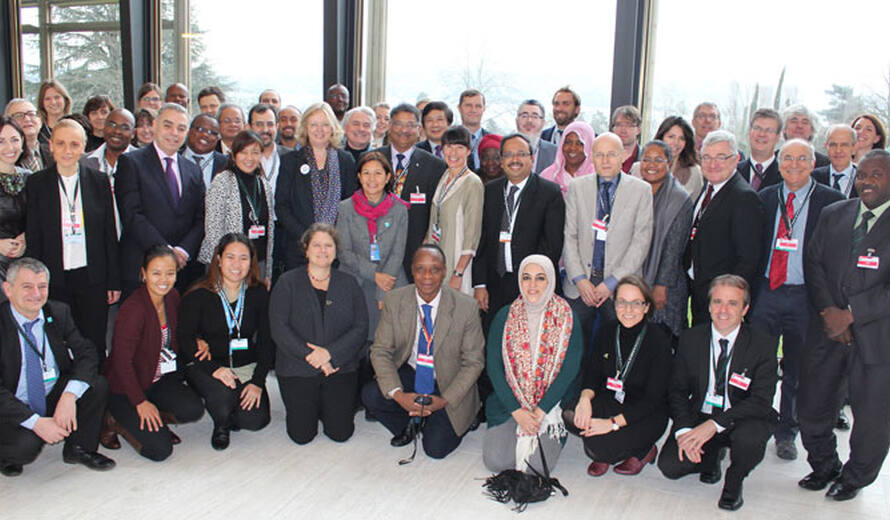 Geneva, 18 February 2016 - Official Representatives of the Parties to seven global biodiversity-related conventions[1] met at the United Nations Office in Geneva from 8 to 11 February 2016 to explore ways to strengthen synergies and improve efficiency among the conventions with a view to enhancing their implementation at all levels. Assisted in their work by the heads and staff of the secretariats of each of the conventions and representatives from a number of international and non-governmental organizations, the four day workshop was mandated by decision XII/6[2] of the Conference of the Parties to the Convention on Biological Diversity (CBD) and was supported with funding from the Governments of Switzerland and Finland.

The Party-led workshop represents the first occasion at which government officials serving on the Bureau, Standing Committee or equivalent body of each of the seven conventions have come together to exchange views and find common solutions. Another unique aspect of the workshop is its preparation by an informal advisory group of officials nominated by governments. Members of the informal advisory group served as the co-chairs of the workshop and as moderators and rapporteurs of the discussions. Throughout the process, the Secretariat of the CBD and the secretariats of the other conventions have supported the informal advisory group in its work. To ensure balance of perspectives, Party representatives were drawn equally from each of the conventions and each of the United Nations regional groups.

The initiative responds not only to guidance provided by the governing bodies of several of the conventions concerned, but also to the call made by governments in paragraph 89 of the outcome document of the United Nations Conference on Sustainable Development (Rio+20), “The future we want”, that encourages parties to multilateral environmental agreements to consider further measures to promote policy coherence at all relevant levels, improve efficiency, reduce unnecessary overlap and duplication, and enhance coordination and cooperation among the multilateral environmental agreements[3].

As the number of obligations under intergovernmental legal instruments has grown, so have concerns about how to implement them effectively and coherently at the national level, as well as at regional and international levels. Enhancing cooperation and effectiveness of global treaties has been on the international agenda for many years. Many past initiatives have aimed at identifying challenges and recommending feasible solutions. However, typically these processes have looked at specific aspects of cooperation among these instruments and involving only subsets of stakeholders.

The goal of the workshop was to outline options, including elements of a possible road map, for Parties of the various biodiversity-related conventions to enhance synergies and improve efficiency among them, without prejudice to the specific objectives and recognizing the respective mandates and subject to the availability of resources of these conventions, with a view to enhancing their implementation at all levels. The Party representatives and other participants had intense days of work both in plenary and in small working groups to ensure that issues were discussed in depth but also that everyone could provide inputs.

The workshop built on the latest existing research on the topic of synergies, in particular on work led by the United Nations Environment Programme through a project on “improving the effectiveness of and cooperation among biodiversity-related conventions and exploring opportunities for further synergies”.

Another important background document was a study on key capacity-building and awareness-raising needs regarding cooperation among biodiversity-related conventions at the national level, which was based on inputs received from the National Focal Points of the seven conventions. In addition to identifying key needs, this study analyzes existing learning opportunities, tools and mechanism to address those needs.

The options and elements for a possible road map for Parties elaborated during the Geneva workshop will be submitted in a report to the first meeting of the CBD Subsidiary Body on Implementation (2 - 6 May 2016) and subsequently to the thirteen meeting of the Conference of the Parties to CBD (COP13, Cancun, Mexico, 4 - 17 December 2016). It is foreseen that the results will also be presented to the governing bodies of the other six biodiversity-related conventions for their consideration.

More details about the workshop are available at: https://www.cbd.int/doc/?meeting=BRCWS-2016-01


******
1]The biodiversity-related conventions are: Convention on Biological Diversity, Convention on the Conservation of Migratory Species of Wild Animals (CMS), Convention on International Trade in Endangered Species of Wild Fauna and Flora (CITES), International Plant Protection Convention, International Treaty on Plant Genetic Resources for Food and Agriculture, Ramsar Convention on Wetlands and the World Heritage Convention.
2]Available online on the CBD website at: https://www.cbd.int/decision/cop/default.shtml?id=13369
3]Paragraph 89 of the Rio+20 outcome document, “The future we want”, states: “We recognize the significant contributions to sustainable development made by the multilateral environmental agreements (MEAs). We acknowledge the work already undertaken to enhance synergies among the three Conventions in the chemicals and waste cluster (the Basel, Rotterdam and Stockholm Conventions). We encourage parties to MEAs to consider further measures, in these and other clusters, as appropriate, to promote policy coherence at all relevant levels, improve efficiency, reduce unnecessary overlap and duplication, and enhance coordination and cooperation among MEAs, including the three Rio Conventions as well as with the UN system in the field”