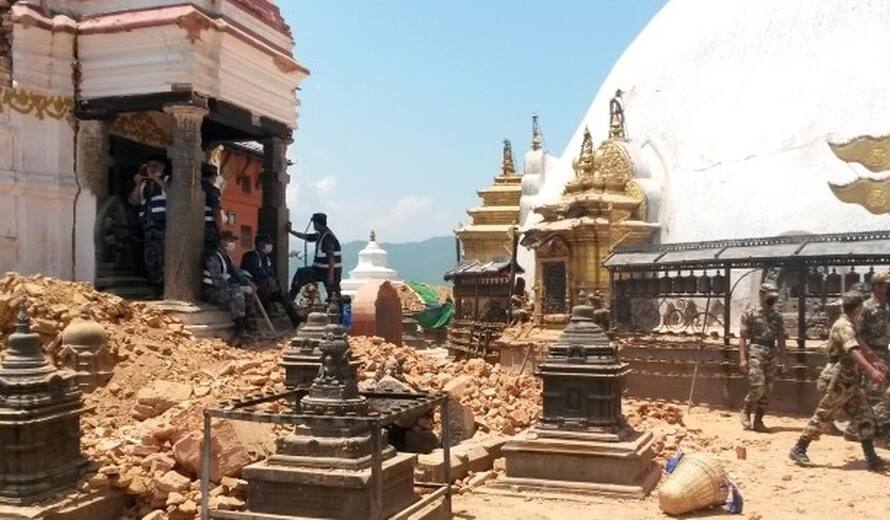 The devastating earthquakes of 25 April and the aftershocks that followed have heavily damaged the monuments and sites within the Kathmandu Valley World Heritage property, as well as an enormous amount of other cultural sites in the northwestern area of Nepal.

Currently closed to tourists and the general public, the three monument zones - Hanumandhoka (Kathmandu) Durbar Square, Swayambhu and Patan Durbar Square - are set to be opened soon. The decision on opening Changu Narayan, another heavily damaged monument zone, is under discussion. With the support of local volunteers as well as long-standing partners ICOMOS, ICORP and ICCROM, UNESCO has continued evaluating damage to Nepalese cultural heritage in the past week, after preliminary assessments had shown that the monuments and sites within the Kathmandu Valley World Heritage property - as well as several other cultural and natural heritage sites located in the area - have suffered extensive damage due to the earthquake of 25 April.

As many of the monuments in these sites are still in a precarious state, the UNESCO Office in Kathmandu reminds the general public to be extra cautious and reconsider the necessity of visiting these sites, while hoping that the decision of reopening them can be re-examined.  It has requested the Nepal Tourism Board and the Department of Archaeology to carefully plan the reopening process, prioritizing safety and security.

In sites like Bhaktapur Durbar Square, Pashupati and Bauddhanath, which are already accessible, there is an urgent need to secure perimeters around the damaged structures and restrict access to locations where structures have collapsed.

According to the assessment by UNESCO, the Patan Museum is unsafe, and setting up perimeters around several damaged temples and limiting access to Patan Durbar Square is recommended.

As Bauddhanath has suffered damage only to the upper part of the mahachaitya and two small stupas to the east and north corner of the main stupa, access to the site is considered safe; It is suggested that the upper platforms remain closed.

Swayambhu and Changu Narayan, both with landslide risks, are recommended to remain closed until proper assessments are carried out. In addition, the process of salvaging the artefacts is still ongoing in Swayambhu and UNESCO believes that opening the area presents a risk of theft of art and cultural objects.

For Hanumandhoka (Kathmandu) Durbar Square, UNESCO urges that the access to the collapsed temples and platforms must be forbidden as people climbing on them weakens the structures. Security perimeters around the collapsed and damaged temples are essential and extra precautions are needed if movement is to be allowed on the pathway between Basantapur plaza and Durbar Square. All parts of collapsed historic monuments and other artefacts need to salvaged, sorted and stored away in an appropriate manner before the remaining debris is removed from the heritage sites.

Apart from being tourist attractions, the monument zones of the Kathmandu Valley World Heritage site are a part of living urban heritage. Such considerations will allow opening up of sites for pilgrims and visitors in a systematic manner.

The Director General of the Department of Archaeology, Bhesh Narayan Dahal, said, “The Department has been assessing the vulnerabilities of the sites and significant monuments and the sites will be opened for visitors on priority basis, while a long term plan will be introduced to reconstruct the fallen monuments.” To ensure the safety of visitors, the security perimeters around the collapsed and vulnerable monuments will be set up in coordination with the Department of Tourism before opening the sites, he added.

Given the enormous importance of cultural heritage to the tourism economy, UNESCO considers that the future rebuilding programme should incorporate ways for visitors to see and understand work in progress. Furthermore, the rebuilding and conservation work needs to be part of a wider sustainable development strategy that aims to revitalize the economy of the area.

Therefore, UNESCO urges a well-coordinated mechanism with creative problem-solving for the management of damaged sites. UNESCO is committed to supporting the Department of Archaeology in devising procedures to secure the heritage sites, ensuring proper treatment of artefacts and devising plans for limited access to the heritage sites after studying each case individually.