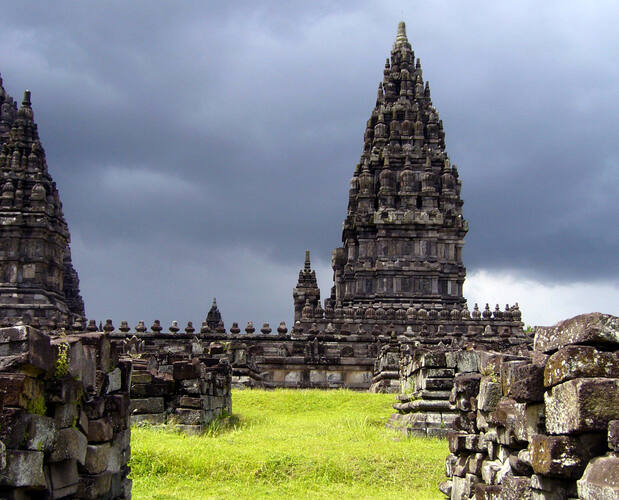 The Panasonic Corporation in cooperation with UNESCO Office Jakarta organised a launching ceremony of LED Lighting Installment in Prambanan Temple Compounds on 17 December 2014. The ceremony was attended by more than 100 participants representing different stakeholders including the National and Local Government, UNESCO Jakarta and Headquarters, local communities, craftsmen, NGOs, as well as creative industries producers.

The ceremony marked the start of two main activities within this framework, namely the illumination of Prambanan Temple with the Panasonic-supported LED lamps, as well as the project entitled ‘Supporting Sustainable Development at the Borobudur and Prambanan World Heritage Sites through Youth Livelihood Development and Green Technologies,’ of which the latter is launched on 18 December 2014 in Borobudur, conducted by UNESCO and Borobudur Conservation Office with the support from Panasonic.

Officially listed as a UNESCO World Heritage site in 1991, the Prambanan Temple previously used halogen lamps to illuminate the compounds. These conventional lamps are now replaced by a total of 16 LED light projectors which will substantially reduce energy consumption, and their long life can also significantly lower maintenance costs. The green technologies introduced in this partnership with Panasonic align well with UNESCO’s long-term objective of safeguarding World Heritage Sites, while strengthening the environmental sustainability of the sites. The LED installation will enable promotion of the site and preservation of the surrounding environment.

The launching ceremony also showcased different local producers and craftsmen from Borobudur and Prambanan area as the beneficiaries of this cooperation between UNESCO and Panasonic. UNESCO supports the sustainable development in both World Heritage Sites through different activities, including Youth Forum to raise awareness in conservation and World Heritage protection as well as education in cultural activities aimed at sustainable development and business development activities for a variety of different creative industries commodities in Borobudur and Prambanan.

UNESCO, represented by Mr. Hubert Gijzen, Ph.D, the Director and Representative of UNESCO Office Jakarta, delivered his remarks emphasizing on the importance of multilateral partnership, involving local and national authorities, local communities, private sectors, and non-governmental organisations to achieve the objective of safeguarding World Heritage sites and empowerment of local livelihood. He also stated that this project is a good example of showing how public-private-community sector can cooperate to promote unity in diversity and cultural literacy.

The event was a follow up on the four-party-signed Memorandum of Understanding (MoU), signed by the Ministry of Education and Culture of the Republic of Indonesia, PT. Taman Wisata Candi Borobudur, Prambanan and Ratu Boko (Persero), the United Nations Educational, Scientific and Cultural Organization (UNESCO) Office in Jakarta, and Panasonic Corporation on October 9, 2014. Through this MoU, the four parties are committed to promote ”conservation and awareness raising for the protection of UNESCO World Heritage Sites” and ” education and cultural activities aimed at sustainable development for young people in the vicinity of the Borobudur, Prambanan, Ratu Boko sites in Indonesia.”