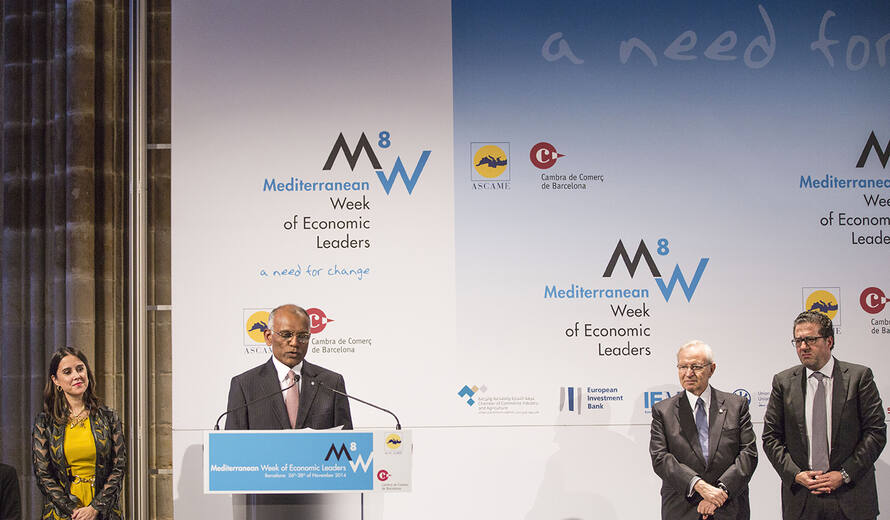 The ASCAME award was given to Mr Kishore Rao, Director of the Division for Heritage and the World Heritage Centre, on behalf of UNESCO at a Gala dinner of the ASCAME General Assembly in the Casa Llotja de Mar in Barcelona by Mr. Mohamed Choucair, President of ASCAME and Mr. Mr. Miquel Valls i Maseda, President of the Barcelona Chamber of Commerce, Industry and Navigation.

Receiving the award, Mr Rao expressed his appreciation for the commitment of ASCAME to protect and promote the Mediterranean cultural heritage, which transcends national boundaries and reflects the life of the region’s communities, their history and their identities. He highlighted the the contribution of culture and heritage to development and peaceful co-existence and underscored that this needs to be fully recognized in the post-2015 development agenda that the international community is currently building.

On 27 November, Mr. Rao delivered a speech on behalf of UNESCO in the official inauguration of the VI Mediterranean Tourism Forum -  MEDITOUR 2014. He highlighted the rich cultural and natural heritage of the Mediterranean region, with 236 World Heritage sites and 56 Elements on the Intangible Heritage List, and the efforts that UNESCO is making to safeguard and promote this heritage together with all stakeholders, including through its sustainable tourism programme. He also reiterated UNESCO’s commitment to strengthen cooperation with the Mediterranean countries and institutions, to harness the true potential of culture and tourism for a more sustainable future.