In this issue, we will discover an overview of the architectural landscape of Poland, as well as the evolution of the protection of heritage in the country, from the early interest in preserving heritage to the rise of the community movement for protecting sites in the 19th century, and involvement of Polish experts in various international efforts such the drafting of the Venice Charter, and the formation of ICOMOS and of the International Committee of the Blue Shield (ICBS). Poland is a leading authority on issues related to reconstruction, due in part to its experience in Warsaw: during the Second World War, more than 85 per cent of the city’s historic centre was destroyed, and following a five-year campaign led by citizens after the war, painstaking efforts resulted in the exemplary reconstruction of its churches, palaces and marketplace.

The Archive of the Warsaw Reconstruction Office, which contains documents on the destruction of Warsaw during the war and its subsequent rebuilding, is now listed in the UNESCO’s International Register of the Memory of the World Programme. This experience is described in an article on Poland’s documentary heritage.

We are also pleased to publish an in-depth interview with Professor Jacek Purchla, Chair of the 41st session of the World Heritage Committee, which touches on building relationships for heritage conservation, educating young people about heritage, and best practice cases of heritage management in Poland.  Also featured in the issue will be messages from Poland’s Minister of Culture and National Heritage Piotr Gliński, and from the Mayor of Krakow Jacek Majchrowski.

I would like to thank the Polish authorities for hosting this session of the World Heritage Committee, and look forward to a fruitful and constructive meeting. 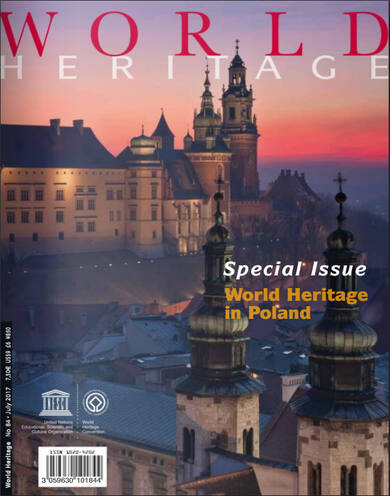