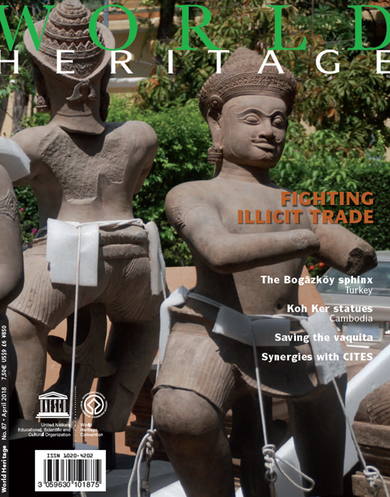 The illicit trafficking of cultural objects depletes cultures of their identity and contributes to lucrative unlawful trade, which helps to finance terrorism and organized crime. It is a problem that has been growing surreptitiously across the globe. As just one example, since 2011, approximately 25 per cent of Syria’s archaeological sites have been pillaged. Objects from conflict regions, including from Iraq, Syria, Libya, Yemen and Mali are circulating on the black market and are already in unscrupulous hands.

It’s not just cultural objects from archeological sites, museums or collections that are affected by illegal trafficking. The illegal logging and trade of rosewood is a threat to the World Heritage site of Dong Phayayen-Khao Yai Forest Complex (Thailand), and has even led to the inscription of the Rainforests of the Atsinanana (Madagascar) on the List of World Heritage in Danger.

The trafficking of wildlife is also a serious conservation issue, affecting shark species in Galápagos, the critically endangered vaquita porpoise in the Gulf of California (Mexico), African elephants in Selous Game Reserve (Tanzania), African grey parrots in Sangha Trinational (Cameroon, Central African Republic, Congo) and the Sumatran rhino in the Tropical Rainforest of Sumatra (Indonesia). Garamba National Park (Democratic Republic of the Congo) was home to the last known northern white rhino population. Today it is probably extinct in the wild and if we do not take action now, more species may be lost forever from our World Heritage sites.

In this issue, we will look at different aspects of illegal trafficking and trade: how indigenous peoples are affected by the misappropriation and illegal transfers of cultural items; the restitution case of the Koh Ker statues, which were returned to Cambodia; and the collaboration of the World Heritage Convention and CITES (the Convention on International Trade in Endangered Species of Wild Fauna and Flora), which works to ensure that international trade in animals and plants – everything from orchids to pangolins – does not threaten their survival. We also have an interview with art collector Jean Claude Gandur, who works closely with international organizations to ensure the correct provenance of objects for sale.

Awareness is always the first step in making a difference. The more we know about the mechanisms of illegal trade, the more we can take preventive and corrective actions to ensure that it ceases to happen. The increasing synergies among different international instruments (such as the 1972 World Heritage Convention, the 1970 Convention on the Means of Prohibiting and Preventing the Illicit Import, Export and Transfer of Ownership of Cultural Property, and CITES), as well as among various public and private, international and local entities (police, customs, the art market, collectors and youth), also represent a crucial step forward towards joint actions on the ground. For the protection and preservation of cultural or natural heritage, education and cooperation are the key factors.

The growing appetite for acquisition is fuelling the illicit trade in cultural and natural materials. This cultural loss is having a detrimental impact on local communities at World Heritage sites and causing the diminution of the very characteristics of Outstanding Universal Value that attracted the sites’ inscription.

Thirty years of civil war did not leave Cambodia unscathed. Beyond the World Heritage site of Angkor, many major temples and monuments such as Banteay Chhmar, Koh Ker, Preah Khan of Kampong Svay and others were cruelly looted.

It is estimated that 45 per cent of the natural World Heritage sites are affected by the illegal harvesting of wild animals and plants listed under the Convention on International Trade in Endangered Species of Wild Fauna and Flora (CITES).

To successfully conserve the critically endangered vaquita, the site requires a long-term vision and concerned stakeholders need to push for changes in policies that go beyond quick fixes.

The Boğazköy sphinx has come back to its country of origin, Turkey. It is a success story showing that bilateral negotiations, no matter how complex they might be, can lead to the satisfactory solution of a conflict that had lasted over a century.

In response to this marked increase in disasters and conflicts affecting World Heritage properties and cultural and natural heritage resources in general, including intangible ones, UNESCO created the Heritage Emergency Fund in 2015.