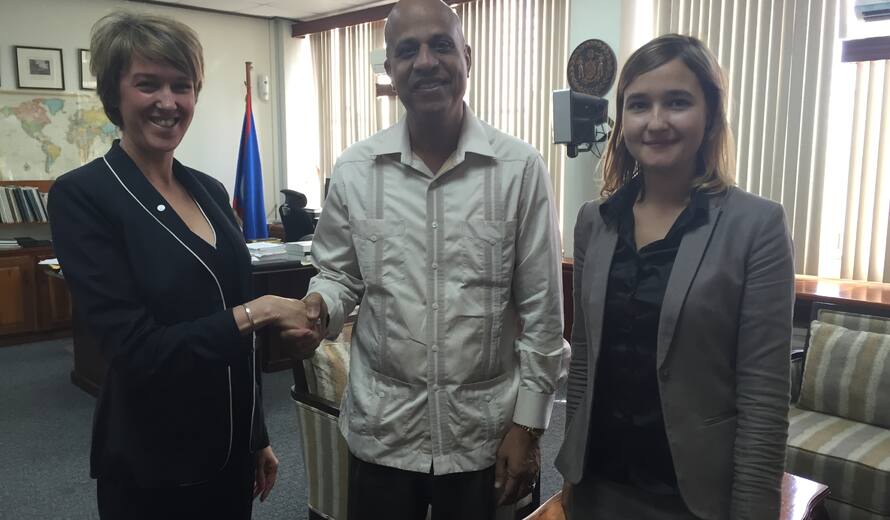 Following a week-long constructive discussion with UNESCO's World Heritage Centre and IUCN, the government of Belize agreed to start talks on critical conservation challenges related to the removal of the Belize Barrier Reef from the World Heritage List in Danger.

From 19-23 January 2015, UNESCO's World Heritage Centre, in cooperation with the International Union for the Conservation of Nature (IUCN), undertook a technical support mission to Belize with the objective of assisting the government in its efforts to prepare a road map for the removal of the Belize Barrier Reef from the List of World Heritage in Danger. Honorable Prime Minister Dean Barrow welcomed the UNESCO representatives and expressed his willingness to chart a course forward on key management requirements for a sustainable future for the reef. Prime Minister Barrow confirmed government’s policy position to prohibit oil exploitation within and adjacent to the protected areas in the Belize Barrier Reef System.

The Belize Barrier Reef is the second largest reef system in the world and forms part of a prestigious collection of iconic places listed as UNESCO World Heritage sites. The 1972 World Heritage Convention is aimed at ensuring that the exceptional values for which these sites are listed endure through government transitions so future generations can continue to enjoy them the same we do today. The Belize Barrier Reef was inscribed on the List of World Heritage in Danger in 2009 because of concerns on the sale, lease and development of mangrove islands and the absence of a solid regulatory framework aimed at ensuring its exceptional and unique values remain. Furthermore in 2010, the World Heritage Committee expressed its serious concerns about the potential for oil developments within and immediately adjacent to the iconic World Heritage site.

The mission was organized on the request of the Government of Belize as a follow up of the decision on the Belize Barrier Reef adopted by the World Heritage Committee (Decision 38COM7A.31) at its last session (Doha, 2014) and through the coordination of the Ministry of Forestry, Fisheries and Sustainable Development. Discussions were held with a wide cross spectrum of fisheries and tourism stakeholders, site managers and government officials.  The mission also included a field visit to the South Water Caye Marine Reserve, one of the seven components that make up this unique World Heritage site. The mission resulted in a draft proposal for a Desired State of Conservation for removal of the site from the List of World Heritage in Danger and includes a suggested set of targets and time frame.

The technical support mission built on initiatives from the World Heritage Centre and UNESCO’s World Heritage Marine Programme to increase management effectiveness by using spatial planning approaches as a key-tool in marine conservation. The technical mission was made possible through the financial support of the Government of Flanders (Belgium).