The Chimu Kingdom, with Chan Chan as its capital, reached its apogee in the 15th century, not long before falling to the Incas. The planning of this huge city, the largest in pre-Columbian America, reflects a strict political and social strategy, marked by the city's division into nine 'citadels' or 'palaces' forming autonomous units. 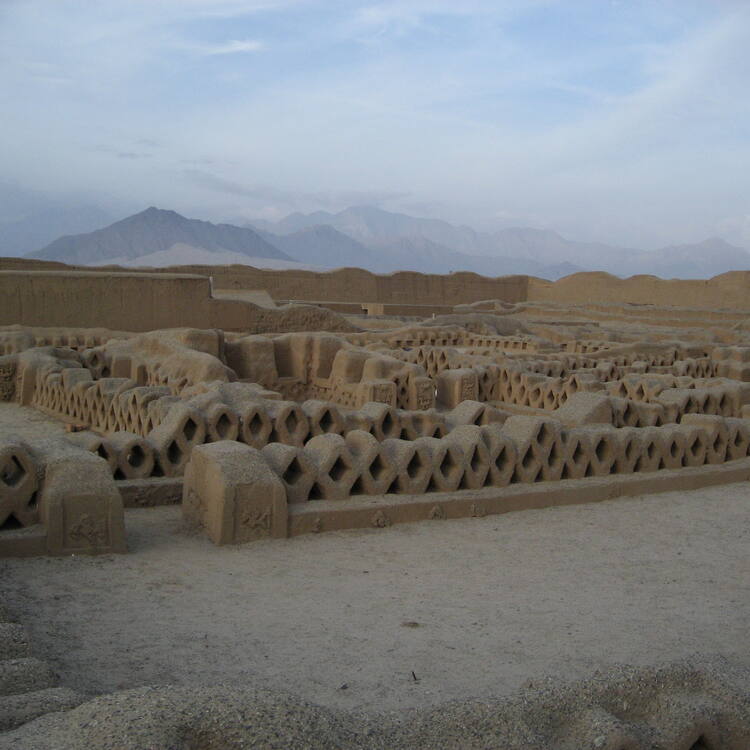 The Chimu Kingdom reached its apogee in the 15th century, not long before falling to the Incas. Its capital Chan Chan, located in the once fertile river valley of Moche or Santa Catalina, was the largest earthen architecture city in pre-Columbian America. The remains of this vast city reflect in their layout a strict political and social strategy, emphasized by their division into nine 'citadels' or 'palaces' forming independent units.

The Outstanding Universal Value of Chan Chan resides in the extensive, hierarchically planned remains of this huge city, including remnants of the industrial, agricultural and water management systems that sustained it.

The monumental zone of around six square kilometres in the centre of the once twenty square kilometre city, comprises nine large rectangular complexes (‘citadels’ or ‘palaces’) delineated by high thick earthen walls. Within these units, buildings including temples, dwellings, storehouses are arranged around open spaces, together with reservoirs, and funeral platforms. The earthen walls of the buildings were often decorated with friezes representing abstract motifs, and anthropomorphical and zoomorphical subjects. Around these nine complexes were thirty two semi monumental compounds and four production sectors for activities such as weaving wood and metal working. Extensive agricultural areas and a remnant irrigation system have been found further to the north, east and west of the city.

The Moche and Chicama rivers once supplied an intricate irrigation system via an approximately 80 kilometre long canal, sustaining the region around Chan Chan during the height of the Chimu civilisation.

Criterion (i): The planning of the largest earthen city of pre-Columbian America is an absolute masterpiece of town planning. Rigorous zoning, differentiated use of inhabited space, and hierarchical construction illustrate a political and social ideal which has rarely been expressed with such clarity.

Criterion (iii): Chan Chan bears a unique testimony and is the most representative city of the disappeared Chimu kingdom where eleven thousand years of cultural evolution in northern Peru are synthesized and expressed. The architectural ensemble uniquely integrated the symbolic and sacred architecture with technological knowledge and the adaptation to the native environment.

Chan Chan retains all the elements that carry its Outstanding Universal Value over an area of fourteen square kilometers, which although less than the original area of the city, contains representative features of the architectural units, ceremonial roads, temples and agricultural units that convey the property’s significance.

The earthen construction of the city, as well as environmental conditions, including extreme climatic conditions caused by El Niño phenomenon, renders the archaeological site susceptible to decay and deterioration. However ongoing maintenance using earthen materials has mitigated the degree of physical impact.

The setting and visual integrity of the property has been impacted negatively by illegal farming practices, exacerbated by pending resolution of land tenure and relocation issues, and by encroaching urban and infrastructure development, including the recent animal food plant and the Trujillo-Huanchaco highway that cuts the site in two since colonial times.

In terms of its form and design, the archaeological site still expresses truthfully the essence of the monumental urban landscape of the former Chimú capital. Also, the hierarchical arrangements reflecting the high political, social, technological, ideological and economic complexity attained by Chimú society between the ninth and fifteenth centuries are still clearly to be discerned. The original earthen architecture with its religious feature and decorations, although subject to decay, is undergoing conservation interventions using earthen materials and still truthfully represents the construction methods and the spirit of the Chimú people.

The Ministry of Culture in Peru (MC), through its decentralized office in La Libertad, is the main agency charged with conserving and defending Chan Chan. It collaborates with authorities at the national, regional and municipal level to implement actions, particularly concerning illegal occupations of the property. The property is protected by national laws and decrees. However, long-standing issues, such as land tenure, relocation of illegal settlers, ceasing of illegal farming practices and enforcement of the regulatory measures have yet to be effectively resolved to ensure the long term conservation and full protection of the property. The regulatory measures for the buffer zone are still in the process of being established in collaboration with the local municipality.

The property was originally placed on the List of World Heritage in Danger in 1986 because of the precarious state of conservation of the earthen architecture and its vulnerability to the extreme climatic events caused by El Niño phenomenon that affects the northern coast of Peru. Furthermore, the ruins were threatened by endemic plundering of archaeological remains, and by the proposed construction of a road crossing the site.

Since the inscription, various steps have been taken towards achieving the desired state of conservation for the removal of the property from the List of World Heritage in Danger including the implementation of corrective measures and the development of a management plan. In addition, remedial measures have been implemented since 1999 to address the threats derived by the rising water table levels at the property.

The management plan was approved in 2000, with a ten year action plan, which will need updating and review as new conditions arise and actions prescribed are completed. Implementation of the action plan has mainly involved the maintenance of drains that control the water table level, stabilization of perimeter walls of palaces and funerary platforms, control of vegetation, maintenance of public use areas, architectural documentation for conservation and management, capacity building for local craftsmen and awareness building measures for students and the local community. An emergency and disaster preparedness plan has been developed against the El Niño phenomenon.

The continuity in implementation of actions has improved with the creation of the Implementing Unit 110 and the allocation of sustained funding for the implementation of the management plan. However, in order to meet the challenges facing the property, there is an urgent need to secure the full operation of an adequate participatory management system and ensure that financial and human resources are adequate to allow for the sustained implementation of conservation, protection and public use management actions. An effective risk management plan is also needed to address both the social and natural threats to the property.

The vision for Chan Chan is that it maintains its status as a cultural symbol for Peru that links the past to the present and plays an essential role in the human development of the region and the country. The conservation and presentation of the archaeological site and its context will contribute to its value and to the strengthening of Peruvian cultural identity. 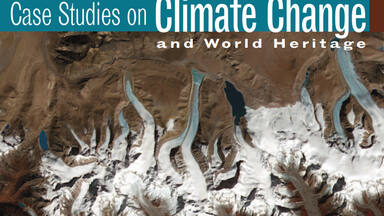