On 14 August 2018, the State Party submitted a report on the state of conservation, a supplement to which, relating only to the annual festival, was received on 15 January 2019. The report is available at http://whc.unesco.org/en/list/1118/documents/ and sets out progress in addressing issues previously highlighted by the Committee, as follows:

Although some progress has been made, given the scale and complexity of the property, the extreme fragility of its sculptures, and the need to respect and sustain the sanctity of the Osun sacred grove, the work appears to be inadequate.

The Outstanding Universal Value (OUV) of the property relates to the way the Osun River, flowing through the forest, is revered as the spiritual abode of the river goddess Osun, and to the sanctity of the landscape as reinforced by some forty shrines and sculptures erected in honour of Osun and other Yoruba deities, all actively used by devotees. Since the inscription of the property on the World Heritage List, the importance of improving the purity of the sacred river, whose waters are drunk during the annual festival, of sustaining the natural forest, and of maintaining the integrity and authenticity of the intricate mud and cement sculptures, has been highlighted. Even though a series of Management Plans have been produced, the latest being for 2015-19, these have not been fully implemented as a result of lack of resources.

Many sculptures are in a state of disrepair, some have collapsed. A group of six Alajere sculptures has been rebuilt, as have 300 metres of decorative wall. The methodology provided does not propose an adequate conservation approach. It states that destroyed sculptures should be replaced by replicas created based on photographs; fallen off pieces are to be replaced and emerged cracks be filled, with all work being carried out with cement and red pigment. Advice on materials has been taken from a large construction company rather than conservators, against the recommendations of the 2015 mission to research appropriate materials for shelter coats of the mud sculptures as an alternative to cement. The current processes are of considerable concern in relation to the authenticity of the property.

Although it is stated that the river has no significant pollution, the analysis undertaken concluded that the water supported aquatic biodiversity but was unfit for drinking as a result of effluent from upstream. Consequently, people must be warned not to drink the water of the sacred river or undertake oblations during the festival until appropriate measures have been taken.

The very successful and well-supported annual festival should be the opportunity to harness support for the conservation of the property. While reinvestment of funds in the property by the Festival Committee is to be welcomed, their use for the creation of an artists’ village causes concern. Indeed, this village of some 70 artists who appear to provide work for sale to tourists has been constructed within the property, without any formal documentation being submitted for approval, and against the recommendation of the 2015 mission that it should be built outside the property.

It is also regrettable that no action has yet been taken for the closure of the main road through the property, foreseen in the Management Plan at the time of inscription and for which the Committee had requested information to be submitted as soon as possible.

Over the 14 years since inscription, the property has not received the resources and support needed to strengthen its assets, whether natural, cultural or associative. The abovementioned vulnerabilities, already identified at the time of inscription, are now developing into threats to the sacred landscape of forest, river and shrines and its associated communities, calling for urgent action given the scale of the conservation problems and the urban development upstream. If not addressed in the near future, the impacts could become irreversible and impact highly adversely on authenticity and integrity. It is of considerable concern that the main recommendations of the 2015 mission and of the Committee at its two previous Decisions raising these issues, have not been adequately addressed. It is therefore recommended that the Committee request the State Party to invite a joint World Heritage Centre/ICCROM/ICOMOS Reactive Monitoring mission to the property to address these conservation issues, in order to assess whether the threats facing the property would, in conformity with Paragraph 179 of the Operational Guidelines, represent or not a case for inscription on the List of World Heritage in Danger, and also to consider how the overall management of the property can be put on more inclusive and sustainable footing. 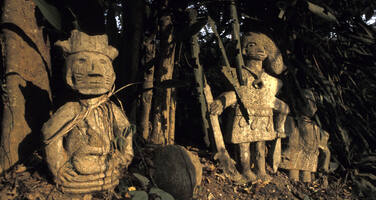