Spain, with its long, complex history and the global character of its territorial and cultural extension, remains marked by a striking diversity of historical influences and regional differences, and it justifiably prides itself on the forty Spanish sites currently inscribed on the World Heritage List. Together, they represent a broad range of categories: religious, military and civic monuments, cities, landscapes, industrial vestiges, prehistoric sites and cultural roads, as well as natural heritage.

Spain is among the countries that have made the most outstanding intellectual and practical contributions to the successful propagation of the World Heritage concept worldwide through a number of remarkable and far-sighted initiatives and a range of generous financial contributions.

The country is, for example, one of the prime contributors to World Heritage through its Funds-in-Trust. The resources donated have helped UNESCO’s effort in the promotion and conservation of World Heritage, with a special focus on Latin America and the Caribbean.

Spain’s munificent support of the UN Millennium Development Goals also represents generosity on a grand scale. Indeed, the country’s energetic and pragmatic approach to World Heritage is everywhere apparent. One of the most original examples of this is the newly formed Association of World Heritage Cities, thanks to which representatives of thirteen cities from various parts of Spain can sit around a table, share their experiences, discuss their common concerns and thus, in close cooperation, find original ways of solving their problems.

Another telling example of Spain’s dynamic participation is the support it has managed to mobilize for the promotion and conservation of World Heritage prehistory sites, a still inadequately represented category on the World Heritage List. The articles in this issue give a good idea of the striking diversity of Spanish listed sites, and reveal the broad impact that the country has exercised worldwide throughout its history.

Map of World Heritage in Spain

Interview with María Jesús San Segundo, Chair of the 33rd session of the World Heritage Committee

Historic cities: The management of a living heritage

The Routes of Santiago: Managing complexity

Religion and culture: The management of an ecclesiastical heritage

World Heritage monuments
- The Alhambra and the Generalife: Landscape and cultural diversity
- Chronicles of the Escurial in the 20th century
- The Great Wall of Europe
- La Lonja de la Seda: The splendour of commerce

Coordinating diversity: The role of the Ministry of Culture in implementing the World Heritage Convention 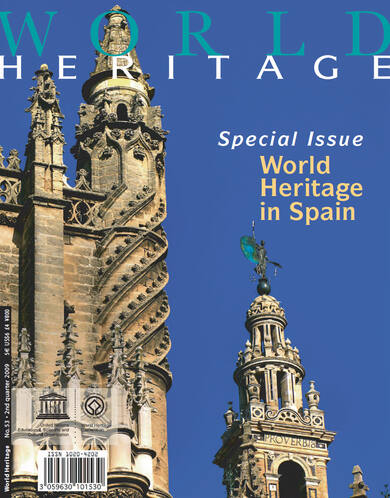