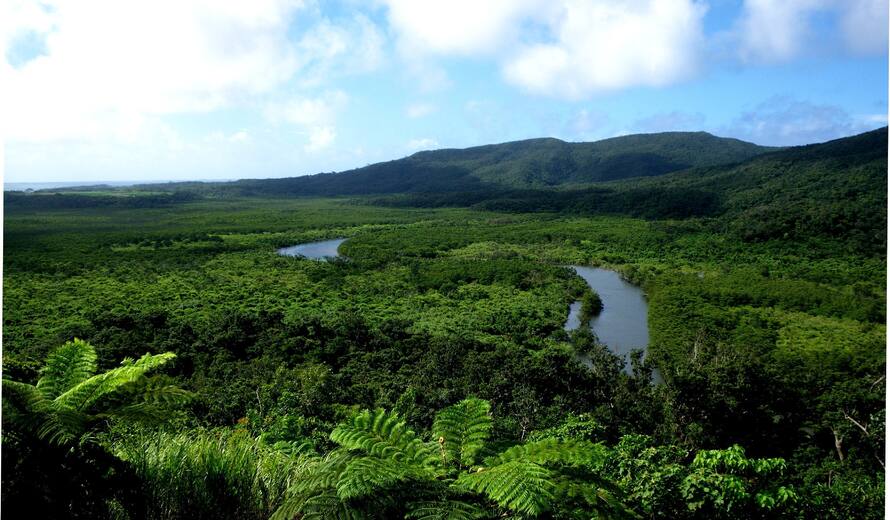 These additions were made during the 44th session of the World Heritage Committee held online and chaired from Fuzhou (China). The inscription of sites on UNESCO’s World Heritage List is scheduled to continue through 28 July.

Japan, Amami-Oshima Island, Tokunoshima Island, northern part of Okinawa Island, and Iriomote Island
Encompassing 42,698 hectares of subtropical rainforests on four islands on a chain located in the southwest of Japan, the serial site forms an arc on the boundary of the East China Sea and Philippine Sea whose highest point, Mount Yuwandake on Amami-Oshima Island, rises 694 metres above sea level. Entirely uninhabited by humans, the site has high biodiversity value with a very high percentage of endemic species, many of them globally threatened. The site is home to endemic plants, mammals, birds, reptiles, amphibians, inland water fish and decapod crustaceans, including, for example, the endangered Amami Rabbit (Pentalagus furnessi) and the endangered Ryukyu Long-haired Rat (Diplothrix legata) that represent ancient lineages and have no living relatives anywhere in the world. Five mammal species, three bird species, and three amphibian species in the property have been identified globally as Evolutionarily Distinct and Globally Endangered (EDGE) species. There are also a number of different endemic species confined to each respective island that are not found elsewhere in the property.

Republic of Korea, Getbol, Korean Tidal Flats
Situated in the eastern Yellow Sea on the southwestern and southern coast of the Republic of Korea, the site comprises four component parts: Seocheon Getbol, Gochang Getbol, Shinan Getbol and Boseong-Suncheon Getbol. The site exhibits a complex combination of geological, oceanographic and climatologic conditions that have led to the development of coastal diverse sedimentary systems. Each component represents one of four tidal flat subtypes (estuarine type, open embayed type, archipelago type and semi-enclosed type). The site hosts high levels of biodiversity, with reports of 2,150 species of flora and fauna, including 22 globally threatened or near-threatened species. It is home to 47 endemic and five endangered marine invertebrate species besides a total of 118 migratory bird species for which the site provides critical habitats. Endemic fauna includes Mud Octopuses (Octopus minor), and deposit feeders like Japanese Mud Crabs (Macrophthalmus japonica), Fiddler Crabs (Uca lactea), and Polychaetes (bristle worms), Stimpson’s Ghost Crabs (Ocypode stimpsoni), Yellow Sea Sand Snails (Umbonium thomasi), , as well as various suspension feeders like clams. The site demonstrates the link between geodiversity and biodiversity, and demonstrates the dependence of cultural diversity and human activity on the natural environment.

Thailand, Kaeng Krachan Forest Complex (KKFC)
The site is located along the Thailand side of the Tenasserim mountain range, part of a north-south granite and limestone mountain ridge running down the Malay Peninsula. Located at the cross-roads between the Himalayan, Indochina, and Sumatran faunal and floral realms, the property is home to rich biodiversity. It is dominated by semi-evergreen/dry evergreen and moist evergreen forest with some mixed deciduous forest, montane forest, and deciduous dipterocarp forest. A number of endemic and globally endangered plant species have been reported in the property, which overlaps with two Important Bird Areas (IBAs) and is noted for its rich diversity of birdlife, including eight globally threatened species. The property is home to the critically endangered Siamese Crocodile (Crocodylus siamensis), the endangered Asiatic Wild Dog (Cuon alpinus), Banteng (Bos javanicus), Asian Elephant (Elephas maximus), Yellow/Elongated Tortoise (Indotestudo elongata), and the endangered Asian Giant Tortoise (Manouria emys), as well as several other vulnerable species of birds and mammals. Remarkably, it is also home to eight cat species: the endangered tiger (Panthera tigris) and Fishing Cat (Prionailurus viverrinus), near-threatened Leopard (Panthera pardus) and Asian Golden Cat (Catopuma temminckii), the vulnerable Clouded Leopard (Neofelis nebulosi) and Marbled Cat (Pardofelis marmorata), as well as Jungle Cat (Felis chaus) and Leopard Cat (Prionailurus bengalensis).

Georgia, Colchic Rainforests and Wetlands
The site comprises seven component parts, within an 80km long corridor along the warm-temperate and extremely humid eastern coast of the Black Sea. They provide a series of the most typical Colchic ecosystems at altitudes ranging from sea level to more than 2,500 metres above it. The main ecosystems are ancient deciduous Colchic rainforests and wetlands, percolation bogs and other mire types of the distinct Colchic mire region. The extremely humid broad-leaved rainforests comprise a highly diverse flora and fauna, with very high densities of endemic and relict species, with significant numbers of globally threatened species and relict species, which survived the glacial cycles of the Tertiary. The site is home to approximately 1,100 species of vascular and non-vascular plants, including 44 threatened vascular plan species, and almost 500 species of vertebrates, and a high number of invertebrate species. The site also harbours 19 threatened animal species including sturgeon, notably the critically endangered Colchic Sturgeon. It is a key stopover for many globally threatened birds that migrate through the Batumi bottleneck.

Turkey, Arslantepe Mound
Arslantepe Mound is a 30-metre-tall archaeological tell located in the Malatya plain, 12 km south-west of the Euphrates River. Archaeological evidence from the site testifies to its occupation from at least the 6th millennium BCE up until the late Roman period. The earliest layers of the Early Uruk period are characterized by adobe houses from the first half of the 4th millennium BCE. The most prominent and flourishing period of the site was in the Late Chalcolithic period, during which the so-called palace complex was constructed. Considerable evidence also testifies to the Early Bronze Age period, most prominently identified by the Royal Tomb complex. The archaeological stratigraphy then extends to the Paleo-Assyrian and Hittite periods, including Neo-Hittite levels. The site illustrates the processes which led to the emergence of a State society in the Near East and a sophisticated bureaucratic system that predates writing. Exceptional metal objects and weapons have been excavated at the site, among them the earliest swords so far known in the world, which suggests the beginning of forms of organized combat as the prerogative of an elite, who exhibited them as instruments of their new political power.

The Netherlands, extension of Defence Lines of Amsterdam, henceforth to be known as Dutch Water Defence Lines
The significant boundary modification of the property first inscribed in 1996 stretches from the IJsselmeer (previously known as Zuiderzee) at Muiden to the Biesbosch estuary at Werkendam. This modification adds the New Dutch Waterline to the existing Defence Line of Amsterdam World Heritage site, to become the Dutch Water Defence Lines World Heritage property and also includes a number of small extensions and reductions to the boundaries of the Defence Line of Amsterdam World Heritage property. In particular, the extension illustrates a single military defence system, which was based on inundation fields, hydraulic installations and on a series of fortifications and military posts stretching over an area of 85 km. It also includes three smaller components: Fort Werk IV, the Tiel Inundation Canal and Fort Pannerden near the German border. Built from 1814 to 1940, they complement the already inscribed site, which is the only example of a fortification based on the principle of controlling the waters. Since the 16th century, the people of the Netherlands have used their expert knowledge of hydraulic engineering for defence purposes. The centre of the country was protected by a network of 45 armed forts, acting in concert with temporary flooding from polders and an intricate system of canals and locks.

Belgium / The Netherlands, Colonies of Benevolence
The transnational serial property encompasses four settlements; cultural landscapes with one colony in Belgium and three in The Netherlands. Together they bear witness to a 19th century experiment in social reform, an effort to alleviate urban poverty by establishing agricultural colonies in remote locations. Established in 1818, Frederiksoord (the Netherlands) is the earliest of these colonies and home to the original headquarters of the Society of Benevolence, an association which aimed to reduce poverty at the national level. Other components of the property are the colonies of Wilhelminaoord and Veenhuizen, in the Netherlands, and Wortel in Belgium. As the colonies’ small farms yielded insufficient revenues, the Society of Benevolence sought other sources of revenue, contracting with the State to settle orphans, soon followed by beggars and vagrants, leading to the creation of “unfree” colonies, such as Veenhuizen, with large dormitory type structures and larger centralized farms for them to work under the supervision of guards. The colonies were designed as panoptic settlements along orthogonal lines. They feature residential buildings, farm houses, churches and other communal facilities. At their peak in the mid-19th century, over 11,000 people lived in such colonies in the Netherlands. In Belgium their number peaked at 6,000 in 1910.